Race to the bottom

As low- or no-pay practices continue to dominate the arts and cultural sector, some enlightened employers are starting to reap the benefits of offering a fairer deal to all staff. Jonathan Knott reflects on the findings of the ArtsPay 2018 survey – and the efforts of those challenging the status quo. 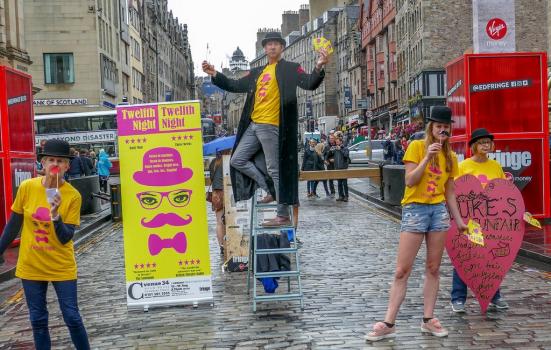 Promotion for a C Venues show at the Edinburgh Fringe.
Photo:

Money is rarely the primary motivation for those working in arts and culture, but the impact of years of austerity, as well as a growing awareness of factors that limit the diversity of the sector’s workforce, have prompted increasing numbers to speak out against unfair and exploitative working conditions. While some senior roles in the arts are enviably remunerated, low or no pay remains the norm across much of the sector.

One of the survey’s most striking revelations is the number of people who took the opportunity to vent their frustration, both with low pay and the widespread expectation of unpaid overtime.

One entry level respondent said: “I feel extremely frustrated at my level of pay in the role I am currently in. I love my job and still have plenty to learn, but barely have enough income to scrape through each month, let alone attempt to save for my future… Lack of pay is such that I am currently considering retraining and moving into an alternative industry that pays more generously.”

This bleak picture is supported by other research. A report from the Sutton Trust last year found that almost 90% of internships in the arts are unpaid. Arts Council England research published earlier this year found that visual artists typically juggle a range of precarious, low paid jobs to get by, while research by recruitment firm the Many Network found that almost two-thirds of performers earned less than £5000 last year. In 2017 the Museums Association found that pay in museums lags 7% behind that for roles requiring similar skills and experience in other sectors. The gap for junior roles was even larger, with pay for curatorial and collections assistants 25% worse than in comparator roles.

A well as prompting people to leave the sector, poor remuneration takes its toll on the wellbeing and mental health of those remaining within it. A report for ACE last year found that low pay, together with other factors such as a lack of work-life balance and limited opportunities for career progression, was contributing to an increasingly high risk of burnout in the sector – particularly for those in leadership roles. As one respondent to the ArtsPay survey said: “We talk so much about how arts and culture are great for mental health, but don't talk about how our working culture contributes to poor mental health.”

David Loumgair, theatre director and Artistic Director of Common, an organisation that supports greater socio-economic diversity in theatre, speaks from personal experience. He explained: “During my early career I did an unpaid internship with quite a sizeable theatre in London and was balancing that with working in a bar, alongside family difficulties and other responsibilities.  I distinctly remember being called into a meeting with my line manager, who said they had spoken with the artistic director about whether I should be let go, because I wasn’t seen to be committing to everything that that internship had to offer.”

The widespread expectation that young people are able to complete unpaid internships, says Loumgair, is one example of the kind of structural barrier that prevents people from lower income backgrounds entering and building careers in the arts sector. And, he says, the psychological pressures created by low or non-existent pay continue beyond internships into early career roles, where wages are often too low to support a sustainable lifestyle.

“If you are paid a wage for an entry level position that is not sustainable unless you’re being subsidised from another source, and you don’t have a financial safety net, you will be so much less likely to be able to progress your career, because of the burnout effect. It feels like there’s almost a race to the bottom, of how little organisations can get away with paying artists and people in their early careers”.

The limited demographics of the sector also filter through to its creative output, undermining efforts to attract a broader range of audiences. Loumgair says that the lack of working class theatre-makers leads to productions featuring stereotyped roles such as “a young tearaway from an estate, or chavs”.

Happily, there are a growing number of organisations and initiatives taking practical steps to support fairer remuneration. Since 2017, the Fair Fringe Campaign (FFC) has been challenging practices at the Edinburgh Fringe Festival that it believes are exploitative – including pay below the minimum wage and the widespread use of unpaid volunteers. Fair Fringe activist Kirsty Haigh says the approach to employment is getting worse in some companies: “As the Fringe is getting bigger, we see more and more venues and Fringe employers operating in the city and that exacerbates problems. There’s less space for the shows, and many venues and employers have got bigger without expanding their staff – or increasing pay or doing anything on the worker end to scale up in the same way.”

The FFC efforts are bearing fruit. Its report highlighting employment practices by operator C Venues led two venue owners – the University of Edinburgh and the Royal Society of Edinburgh – to stop allowing the company to use their buildings. The campaign has also asked Edinburgh City Council to stop giving licences to exploitative employers, and not rent their buildings to them.

But Haigh says that the move that would make the biggest difference would be for the Fringe Society to prevent exploitative employers from advertising in the festival’s programme: “We would see so much of the Fringe change overnight”.

Bringing about change is unlikely to be easy, though, with commercial Fringe operators remaining committed to volunteer-based business models. C Venues says that it "is and always has been" a volunteer-focused organisation and that its volunteers "choose to come to the Fringe to learn and take part, and are not workers", adding "we aim to keep our volunteer programme in line with guidance from the Fringe Society, Volunteer Scotland and Volunteer Edinburgh."

Elsewhere, some cultural organisations are making a commitment to offer sustainable levels of pay. English National Ballet, the National Portrait Gallery and Birmingham Museums are among the cultural organisations accredited as Living Wage Employers with the Living Wage Foundation, committing them to paying staff £9 an hour outside London, and £10.55 an hour in the UK capital.

But it’s not just the big employers who are taking action. Discover Children’s Story Centre in East London is not officially accredited as a Living Wage Employer, but has started paying at least this wage to all its staff and freelancers. Chief Executive Karla Barnacle-Best says that the organisation took the decision at a time when it was deliberating over its charitable purpose: “It was hard to marry being a charity and talking about what your ethos and purpose is, while also saying ‘We can’t quite afford to pay a living wage’. It felt like that was really important – otherwise we would be asking people to subsidise our charitable purpose.”

It took the organisation around two years from taking the decision to pay the Living Wage to enacting it. More senior staff understood the need to receive relatively lower pay increases to enable the organisation to bring all staff up to the appropriate level. Barnacle-Best says that as well as being the right thing to do, the decision has boosted staff morale and made it easier to recruit people, and improved the organisation’s reputation and overall harmony: “It is easier to work in teams and manage people when you feel they are being paid reasonably, than if you feel in your heart of hearts that this isn’t really right”.

Discover did not need to reduce its level of activity or staff numbers in order to make the change, but sometimes sacrifices have to be made. Michelle Wright, a trustee at Discover, has turned consultancy Cause4, where she is Chief Executive, into a Living Wage employer over the past few years: “To do that meant we had to take the decision to employ less people: we have a ‘small is beautiful’ approach,” she says.

In its first year of moving towards paying the Living Wage, Cause4 did not replace several members of staff when they left, which was “quite tough” in terms of reducing output and how the move was perceived within the organisation and the sector – but it has ultimately helped the social enterprise focus its priorities and strengthen its business model. While Cause4 has always paid interns a full salary, Wright says paying them the Living Wage has led to it recruiting a more diverse demographic, attracting those who cannot rely on family money for extra support.

She adds that “the benefits of paying people properly is massive in terms of productivity, integration within the organisation, how people feel about coming to work, and all those things. For us, the benefits of retention, motivation and engagement have far outweighed the negatives. And I don’t think that fundamentally we are doing less activity. I think too many organisations see it in a one-dimensional way of ‘how do I make the budget balance?’ as opposed to ‘how do I make a healthier organisational culture?’”

Arts Council England (ACE) states that fees and salaries for people working in the arts aged 25 or over should, “as an absolute minimum”, match the ‘National Living Wage’ set by the Government - which is lower than the real Living Wage set by the Living Wage Foundation.

But Wright argues that major funders should go further and take a lead in driving fair pay in the sector. She believes that paying the Living Wage should be part of ACE’s funding agreements for National Portfolio Organisations: “Often you are being supported to be a resilient organisation to do particular work in the sector, but if you are not paying people properly, then an organisation is not demonstrating either a sustainable model, or good practice”.

Many will have some sympathy with arts leaders tasked with balancing their books amid ongoing pressure on funding. But nonetheless, organisations that offer unsustainable rates of pay are sending a clear message that the wellbeing of their workers and the diversity of their organisations are not high on their list of priorities. In the words of one senior level respondent to the ArtsPay survey: “Too many arts organisations have yet to learn that a lack of funding does not entitle them to pay staff, artists or others poorly. Especially when senior staff are paid reasonably well. If you don’t have the finances to match your ambitions, tough luck.”