Shaking things up with Shakespeare

Community productions across England are transforming attitudes to theatre among audiences with little experience of the artform, finds Jonathan Knott. 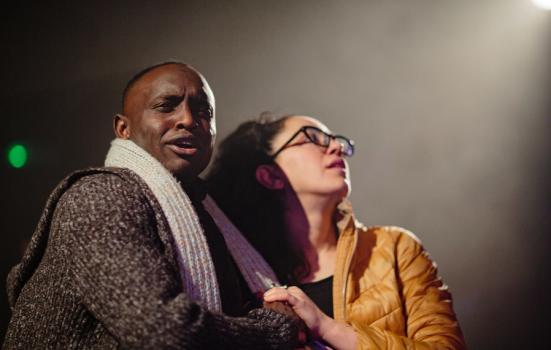 At a community production at Nottingham’s Theatre Royal and Royal Concert Hall last year, a man in his eighties stood up on stage to tell a story about how he had fallen in love many years ago at the city’s Goose Fair – a traditional funfair – and how it had led to a long and happy marriage.

“It was rather amazing”, says Erica Whyman, Deputy Artistic Director at the Royal Shakespeare Company (RSC) “He’d never acted before. He took such confidence from standing on stage and telling his story”.

If you can demystify Shakespeare, then you’ve demystified the whole thing

This cameo was part of a reinterpretation of Romeo and Juliet by a local choir formed of people who had come together to improve their mental health. They held their rehearsals at the venue, but had engaged little with its output. The show was facilitated by both the theatre and the RSC, who provided a director and actors for the two lead roles.

The other parts were played by choir members – whose transformation in attitudes was remarkable, says Whyman. “They swore blind that they wouldn’t do Shakespeare, saying ‘That would scare the life out of us’,” she says. “Six months later they did their own version of Romeo and Juliet, using the Goose Fair as an inspiration”. The fair is a Nottingham institution with “quite a rowdy reputation” – but the choir drew on their memories to portray it nostalgically as “an amazing night out”.

This production was one of three that the RSC has supported as part of Shakespeare Nation, a four year project that began last year, working with communities who “would not normally think theatre and Shakespeare are for them”. So far, community productions have been developed with the RSC’s partner theatres in Blackpool and Norwich as well as Nottingham – and three more are planned in Bradford, Canterbury and Truro this year.

Each group has interpreted the work in their own way, says Whyman. But they have all found that “if you get up on your feet and speak Shakespeare’s words, you find an emotional connection to it, you find a relationship to your own life and experiences. It really seems to change people’s view of whether it’s for them – and whether theatre full stop is for them.”

This helps the RSC build an audience for its productions in the places it tours to, so that “it’s not coming in a vacuum – it’s connected to those long-term relationships with communities.”

Some participants in the productions have gone on to attend RSC productions in their area. “They are going back to see the work and they want to carry on making theatre,” says Whyman, but she acknowledges that “it’s pretty early days to know whether we have turned them into lifelong audience members”.

In each location, the productions have taken on a different flavour to reflect the concerns of the people who made them – and have helped to bring different groups closer together. The show at Norwich’s Theatre Royal involved students, an organisation that worked with recent migrants, and a group of young people who were transgender, genderqueer, intersex or questioning their gender.

This production, some of which was in Arabic, took a “darker line” on the play, focusing on its themes of exclusion, banishment and feeling unwelcome. At some points “difficult conversations” arose between Muslim participants with traditional outlooks and the gender-questioning young people. But ultimately, the two were able to reach a mutual understanding.

“When I saw the work, everyone who’d participated – including people who’d found that quite hard and had thought maybe at one point they wouldn’t take part – were all there to support each other.”

But how is the impact on making theatre and community relations linked to developing an audience? For Whyman, there is no clear line between the two. “Traditionally we think of audience development as slightly separate to participation,” she says. “But it’s been our experience that if you convert theatre sceptics into theatre lovers, then what you get is really great advocates for the theatre”.

The RSC’s work with schools has taught it the power of engaging meaningfully with individual and group responses to shows: Shakespeare Nation is now applying this insight to adults. “Work around Shakespeare and adults has tended to be all about attracting audiences to quality events,” she says. “This is saying: this could be about you. Rather than ‘did you like it’, ‘What does Romeo and Juliet mean in your life?’” Asking this in Blackpool, for example, revealed people’s feelings that “it’s a place of great promise and romance, and therefore great disappointment sometimes”.

Gaining a deeper understanding of local communities in this way will inform the RSC’s own productions in future, says Whyman: “The work we make shouldn’t inadvertently be about South Warwickshire or about some imagined England. It should be about the actual country that we work in and serve. Getting to know Norwich better and getting to know the Goose Fair in Nottingham will influence the way we think about casting and design, and how we interpret the plays”.

But is a playwright with such forbidding reputation as Shakespeare really the best choice to switch new people on to theatre? Absolutely, says Whyman: “If you can demystify Shakespeare, then you’ve demystified the whole thing”.

A really interesting article, thank you. We've been doing much the same thing across Europe for the past 10 years. Shakespeare has an incredible power to bring people together to explore their world and their lives. https://vimeo.com/channels/parrabbola/75783161 http://pub.lucidpress.com/sitespecificshakespeare/