Better arts leadership? In your dreams...

The Tavistock Institute’s courses have always embraced approaches outside of the mainstream. Heather Stradling tells Jonathan Knott how it’s now upping the creative element to take things to the next level. 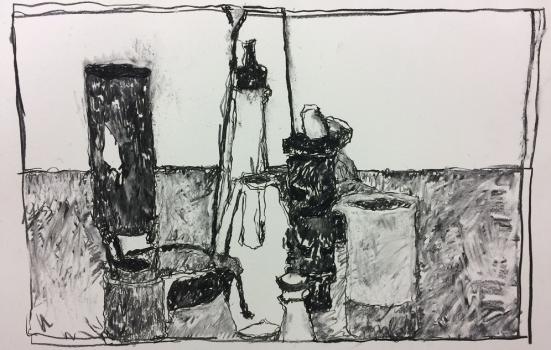 A charcoal study by Juliet Scott

At a series of events at London’s Wellcome Library in 2016, staff from the Tavistock Institute of Human Relations invited members of the public to share their dreams with a group of 40 strangers. The significance of these might not have been immediately obvious: they included a London tube train where presents had been left on the seats but were actually bombs. In another dream there were a lot of people in a taxi. But through discussion, it became clear that many related to the Brexit referendum vote that had happened the day before.

“The dreams were very much a symbol of what was going on in society at the time,” says Heather Stradling, Senior Researcher and Consultant at the Tavistock Institute, who was one of the team facilitating the events. “And it enabled a group of strangers to have a conversation about that and what it meant. The dreams give a bit of a framework to have deeper conversations which might then lead to change or action in some way”.

This was an example of ‘social dreaming’ – an approach that uses the group discussion of dreams to shed light on the context they occur in. It can be an effective way of addressing contemporary challenges, whether these are within society at large or a particular organisation, says Stradling: “It helps bring things to the surface and it enables people to have some conversation that perhaps couldn’t be had at an earlier date or in another way”.

The approach has its origins in 1930s Germany, when journalist Charlotte Beradt found that many Jewish people were having dreams that expressed fears and expectations about life under the Nazi government. The institute believes social dreaming can similarly be used to address challenges bubbling below the surface of contemporary life. Within organisations, this “might be about gender equality, race or class or some of those difficult issues that come up in conversations”.

It can also help make space for thinking that might not be a priority in formats like office meetings, says Stradling: “You have a meeting and an agenda, obviously the things that people don’t want to discuss somehow get pushed out of the agenda or the meeting runs out of time, and people are either relieved or frustrated. Social dreaming completely challenges that – it’s amazing what conversations can come through that kind of approach”.

The institute has been applying a ‘trans-disciplinary’ approach to organisational dynamics since its foundation in 1947. It has strong links to psychoanalysis and a lot of its activities focus on awareness of the unconscious. While artistic practice has always formed part of its professional development work, this course differs by putting the arts front and centre.

“Juliet and I are commissioning and working with artists in the design and delivery of the programme,” says Stradling. “Whereas on our other programmes it might be a morning or evening workshop, the creative and artistic experience is much more threaded through the everyday of this programme.”

But how does all this help organisations? “A lot of workplace issues that become difficult are the ones about relationships between individuals,” says Stradling. “What the creative and artistic approach will enable for people to look at issues in a new and different way. Starting from a different beginning point might help people find more useful answers”.

“It can be tempting to think ‘this is what leadership looks like, this is what organisational change looks like’. But maybe we need to be more curious, to question more and not be afraid try out different approaches”.

Those hoping to return to the office with a list of bullet points to put into action may be disappointed, however: “It’s not about picking up a set of tools you can then use within an organisation. It’s about challenging thinking – your own and other people’s – and learning in a different way”.

In the same way, says Stradling, this kind of approach could be used to heal our polarised society – which often seems increasingly divided – whether on political issues like Brexit or HS2, or the ongoing culture war.

“There is a lot that is set out in a binary way and there’s this sort of striving to simplify things. Maybe in times of instability people are seeking to find simplicity in some way. There does seem to be something going on more globally around that. Issues like HS2 or whatever it is can mobilise people to take one side or another…there is something concerning about it”.

Despite championing non-mainstream approaches, Tavistock has welcomed many people from major corporate and governmental organisations onto its courses. Attendees on past professional development programmes have included the Archdeacon of Leicester, a Detective Chief Superintendent from the Metropolitan Police, the Deputy Chief Executive of the NHS, and leading artists.

In its first year, the new DCP programme is expecting about 10 people. Participants are expected to come from across the public, private and voluntary sectors and may include HR and management professionals, independent consultants, and practising artists and arts researchers, says Stradling. While the course material might not seem likely to appeal to corporate types, she warns against jumping to conclusions:

“Individuals are very different and they’re not always what you expect. It’s tempting to think the person working in the global corporation would behave in a different way to someone who works on a small community project, but it’s not always the way…There aren’t necessarily any expectations in terms of how a person might act. DCP offers a safe space to be able to explore things and bring the different personal and professional experiences of participants together.”

The institute has its roots at the beginning of the last century, in rehabilitating soldiers returning from the trauma of the First World War. Stradling says a similar approach can help society today: “Some of those issues are very much alive today: how can we live and work together in a world that can feel increasingly divided and what can we do about it? Those pioneers were experimenting and exploring how to address emerging issues. We’re in that sort of world again. We need to find different ways of having conversations, and the arts is as much a part of that as any other approach”.