Across the UK, but especially in London, arts workers are considering their futures in the sector as salaries have fallen out of step with the cost of living. 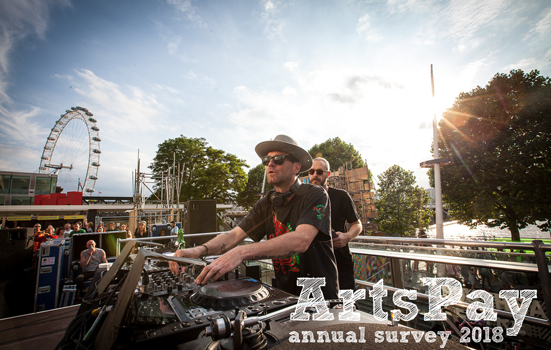 In London and across the rest of the UK, employees are considering leaving the cultural sector in an attempt to earn a realistic living wage.

According to figures from ArtsProfessional’s ArtsPay2018 survey, there are significant differences in pay between London and the rest of the UK. But low levels of pay across the board leave many arts workers – at all stages in their careers and wherever they live – feeling that they or their families are subsidising their career in the cultural sector.

Average (median) pay for respondents employed full-time in early career roles in the capital was reported as over £23,000, while elsewhere in England people in this group are earning £19k. This is roughly equivalent to average graduate starting salaries across the UK, which graduate-jobs.com estimates to be from £19k to £22k.

But pay progression is slow. The research reveals that those working in mid-career roles in London earn an average of £30k, compared with £26k elsewhere, and at senior levels, the gap is greater. The average pay of those self-defining as working in senior roles in London is £45k, but only £37k in the rest of England.

The salaries reported by respondents in Scotland and Wales are very similar to England outside London. Survey response rates from Northern Ireland were too low for meaningful comparisons. 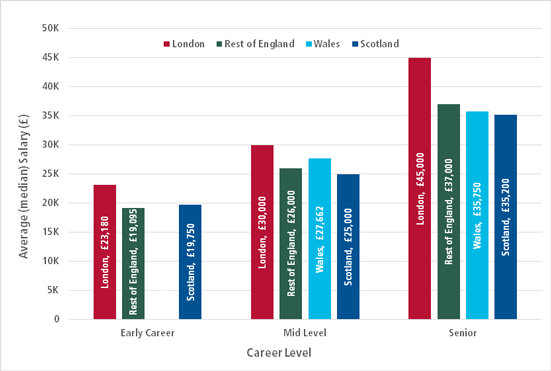 The pay gap between London and the rest of England means that opportunities for earning higher salaries are significantly lower outside the capital. Over a quarter of respondents working in London earned over £40k a year (26%) compared with fewer than one in five (18.5%) elsewhere. 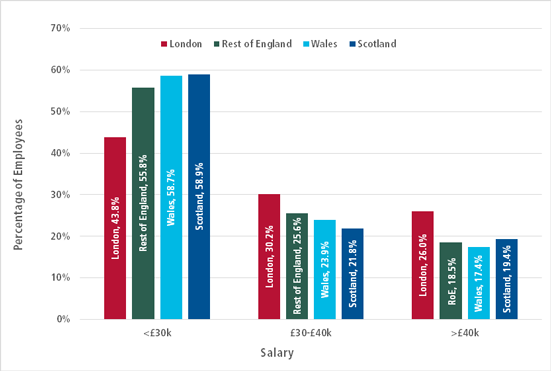 The differing sizes of organisations across the country is likely to be a key factor influencing pay in the capital. Only 13% of respondents working in London said their organisation’s turnover was less than £500k a year, compared with almost quarter (24%) of respondents living in the rest of England.

Average salaries for different types of work also vary across the country.

The types of job offering the best salaries are senior roles that primarily involve organisational development, strategic planning and policy-making.  In London, the average salary for such roles is £50k, compared with £42k elsewhere in England.

In contrast, those whose main role is artistic direction, programming or curation earn on average £35,500 in London, and just over £29k in the regions.

Over half (55%) of respondents employed in London are aged under 35, compared with less than a third (29%) of those in the rest of England, and the survey findings suggest that London is a magnet for young people working in the sector.

This is despite low entry-level pay in the capital. One respondent pointed out: “Many entry level jobs in London pay around £18,000 per year which is unsustainable in London unless you come from a wealthy background.”

The figures suggest that entry-level jobs are easier to find in London than in the rest of the country. 17% of London-based respondents held early-career roles, compared with 12% elsewhere.

But whilst these opportunities attract early career workers to the city, slow financial progression (and in some cases, financial regression) is turning them away from both the sector and the capital.

Respondents frequently commented on how living in London is only possible for them due to the income of a partner working outside the arts, and many said that leaving that leaving the arts or leaving London would be the only viable way forward. “I'm finding living in London increasingly unsustainable. I always said I wouldn't choose a job for money, but passion cannot supplement my salary”, said one respondent.

The cost of living appears to be causing many arts workers to rethink their London-based careers, as well as some living elsewhere in the country in places where living costs are similar to London. They too are struggling to make ends meet on their arts pay.

This common theme was summarised by one respondent who said: “I am now in a part of Yorkshire where rent and living costs are much higher than the regional average, but salaries do not reflect that.”

Similar observations were made about Oxford, Bristol, Brighton and the South East region as a whole.

Freelance workers in areas where the cost of living is highest are the ones most likely to be facing financial difficulties, as there is no evidence that anyone living in the capital can earn a higher daily rate to reflect their higher living costs.

The survey found that freelance fees have stagnated over as much as two decades. Average hourly rates now range from £20 to £35, and daily rates from £138 to £150.

One respondent said: “… my facilitation day rate from the mid 1990s of £150 per day is often the same now; it is usually pre-set within the budget and hardly ever negotiable. Sometimes the rate is even less and occasionally it is a little more.”

There are, however, major differences in the total income workers receive from their freelance activities. London-based workers appear to rely less heavily on their freelance earnings, with more of them appearing to treat freelance work as a supplementary source of income.

This is the third in a series of articles relating to the findings from the 2018 ArtsPay survey. Findings based on further analysis will be published in the coming months. ArtsProfessional would welcome conversations with academic institutions and other bodies interested in having access to the wholly anonymous data set to conduct further analysis that will shed more light on pay practices in the cultural sector.