Still waiting for the breakthrough

2008 saw the publication of New Flow, a radical vision for a new framework that abandons narrow definitions of the arts and embraces "the full, delicious cacophony of what artists and citizens believe the arts to be". Author Tim Joss reflects on his vision for the future. 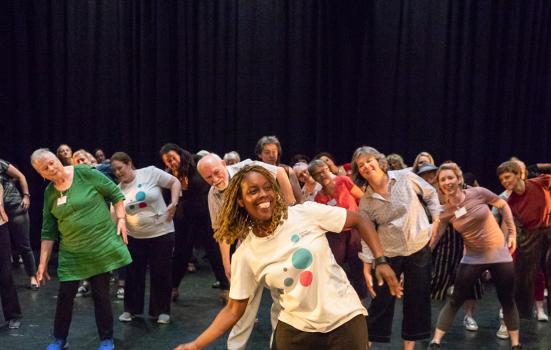 ‘Dance to Health’, an arts solution to a health problem

I wrote New Flow in 2008, spurred on by a belief – shared I know by many in the arts world – that artists’ vital contribution to our society and economy is not being fully realised.

While science explains the world, the arts give it meaning. It’s the track that makes you want to dance, the poem that speaks to your heart and the boxed set that plays out a ‘what if?’ that you fear or hope for. Artists help you find meaning. We engage every day with their creations via television, radio and our mobiles.

New Flow called for four changes: a more truthful definition of the ‘arts’; a more thorough understanding of the artist’s role in society; a programme to support artists and realise the arts’ full potential to improve lives; and new state structures to help build momentum for change.

People remain uncomfortable with the term ‘the arts’, as an Arts Council England survey found last year. But they are at ease with individual artforms and the words ‘artist’ and ‘artistic’. We are in transition. ‘The arts’ still has a whiff of exclusivity. The public needs an umbrella term for all artforms and artists, especially given its importance – greater than ever – to our national self-image, economy and our own wellbeing. Creativity and creative industries won’t do; scientists are creative and artistic heritage is a tricky fit. Culture won’t do; the arts are certainly part of culture but so are cookery, language and religion.

Do we better understand the artist’s role in society? I think not, for three reasons. First, research into the artist’s role is underdeveloped. Second, the artist has not been well supported as freedom of expression has declined. Article 19 reported in 2018 that global freedom of expression has declined continuously for the previous ten years. Lastly, we know that artists can give expression to diverse ideas, cultures and artistic traditions. They can enlarge sympathies and heal divisions. If this were better understood, artists would surely have a much more prominent role in healing a Britain dragged down by economic, social, health and cultural inequalities and divided on values, immigration, race and religion.

Since New Flow, interest in realising the arts’ full potential to improve lives has grown – in community development, criminal justice and international relations, for example. But we’re not getting the breakthrough. The arts’ declining status in education is depressing and we don’t know why. Priority is given to science, technology, engineering and maths, the STEM subjects. Arts GCSE registrations have fallen by almost 150,000 in the past five years. The arts were excluded from the English Baccalaureate. The government’s Creative Partnerships programme was meant to construct long-term links between schools and creative professionals including artists, but the legacy is minimal.

More encouraging is health. The All-Party Parliamentary Group on Arts, Health and Wellbeing produced its ‘Creative Health’ report in 2017. It is a vast compendium of art and health programmes all backed to varying degrees by evidence. Research into artistic contributions to health improvement continues to grow significantly. Following on from ‘Creative Health’, the World Health Organisation published last year its first report on the evidence base for arts and health interventions. The arts is an important strand of social prescribing, enabling NHS patients to connect with community groups and statutory services outside the health system for practical and emotional support.

But ‘Creative Health’ is still waiting for the breakthrough. It traces the recent history of arts and health back to the early 1970s. 45 years later the report had to acknowledge that ‘the United Kingdom is still very far from realising more than a small modicum of the potential contribution of the arts to health and wellbeing’. There is no evidence that current activity is leading to more arts and health programmes inside the NHS let alone evidence that non-arts services funded by the NHS are being decommissioned and replaced by more effective and cost-effective arts services.

The main health sector blockage is the pace of adoption of innovations of all kinds, not just arts and health. A Royal Society of Medicine paper talked about it taking an average of 17 years.

There are two main blockages within the arts sector. The first is an aversion to scaling – ‘not appropriate for arts and health’ and ‘contentious’ I was told by senior figures in the arts and health community. Health needs universal services, not arts projects for a lucky few. Given the arts’ potential to improve people’s health, the arts sector must develop suitable forms of scaling – ones that are place-based, co-designed and culturally sensitive. Scaling is a matter of social justice.

The second blockage is the old polarisation of the intrinsic and instrumental. It was a still a ‘logjam’ for the AHRC’s Cultural Value Project in 2016. Too many in the arts think we can’t do any better than a crude compromise. We need to find a practical way through. From my own experience, it is not only possible to devise programmes which are both artistically strong and capable of delivering significant social impact: a creative dynamic can drive continuous improvement. Artists develop the artistic activity as they understand the health challenge better and health professionals develop the health dimension as they understand what the artists can do.

New Flow also proposed new state structures to support change: an arm’s length arts research and development agency supporting artistic innovation and a body at the top table of government for public engagement with the arts. Both organisations would embrace the commercial and amateur/voluntary/community arts and arts contributions to other sectors such as health. In its 2020-30 strategy, Arts Council England thinking has progressed. It sees itself more a development agency and less a grant-maker. It wants to be more inclusive towards different artforms and genres and, as its title ‘Let’s Create’ implies, past skewing of investment towards attendance and away from participation may be addressed.

There is much to be done in arts R&D. My top three projects would be strengthening safe spaces for artists to make work, digital means for many more people to have access to the arts, and exploring a much broader range of business models for the arts to grow responsibly. For these to be addressed properly we certainly need an arms-length body, but it needs to be more than an arts council operating as a registered charity outside government. One idea would be to learn from UK Research & Innovation which has both the Arts & Humanities Research Council (for research) and Innovate UK (for development).

Equally, there is so much more to be done to develop public engagement with the arts: for example, addressing cultural inequalities, achieving universal access through schools, and making that long-awaited breakthrough in arts and health.  For this, we need not an arm’s length body but one at the top table of government fully involved in helping the public engage with the arts.

Aesop’s vision is for a future when arts solutions for society’s problems are valued and available for all who need them. Currently focusing on health and wellbeing, it runs Dance to Health, a falls prevention dance programme, and developed the first evaluation framework for arts in health and the first survey of health sector attitudes to the arts. Its next national arts in health conferences for health decision-makers will take place later this year, presented in partnership with the Southbank Centre.

Arts and health: think big and embrace the opportunities
Still waiting for the breakthrough
A proud partner of health
Healthy evidence
Healthy prospects
Jam tomorrow
Who should lead the arts sector?
Crits