The fall in entry numbers for GCSE arts subjects has reached record levels, but an Ofqual report understates dramatic losses in design and technology. 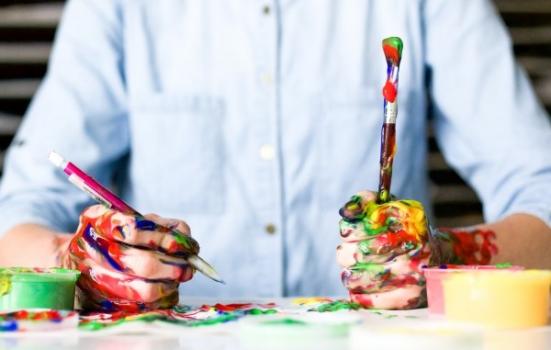 Registrations for 2018 arts GCSEs in England have plummeted by a further 51,000, taking the total fall in entries to almost 150,000 over the past five years.

New data published by qualifications regulator Ofqual show that since 2014, arts subjects have seen a 25.6% fall in entries. Over the same period, total GCSE entries have grown by 3.4%.

The figures give the lie to claims by the Department for Education earlier this month that “the percentage of pupils taking arts GCSEs has remained stable”.

Arts subjects now account for just 1 in 12 of all GCSEs taken, compared with around 1 in 8 five years ago.

The GCSE subjects showing the strongest growth are exclusively those included in the English Baccalaureate (EBacc) – the suite of subjects included in the Government’s performance measure for schools. While the take-up of EBacc subjects has grown by 5% this year, at the same time there has been a 13% fall in entries for non-EBacc subjects. 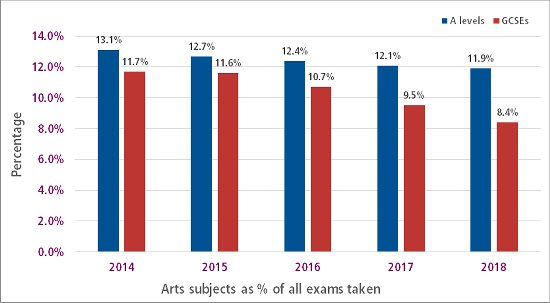 The figures recording England’s GCSE and A level exam entries are produced annually by Ofqual.

Its 2018 data, published last week, reveals that the rate of decline in take-up of GCSEs in arts subjects is showing no signs of abating. The 51,000 fewer entries this year are on top of more than 46,000 last year, and cumulative losses over the past 5 years have now reached nearly 150,000. 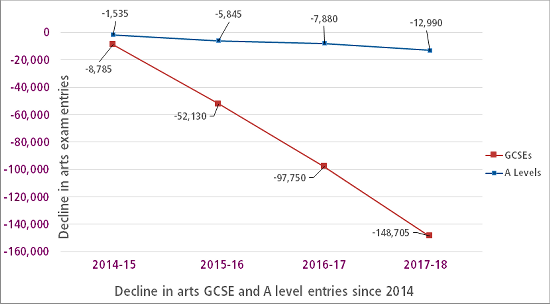 Design & technology, drama, media/film/tv, music and performing/expressive arts GCSEs were all studied by fewer students this year than last.

Only art & design has bucked the trend, being studied by 3,650 more students this year than last – a 2.2% increase. It was the only non-EBacc subject to show any growth at all, but even this increase failed to keep pace with the growth in total exam entries.

The growth in art & design is also dwarfed by the huge loss of entries in design & technology, which has suffered the steepest decline of all.

38,000 fewer students are taking design & technology this year – more than double the losses last year. This is the single largest fall in any GCSE subject.

In total 42% fewer students are taking this subject this year compared with five years ago – a fall of 86,000.

No separate figures have been published for dance, which is included in the category ‘All other subjects’. This group as a whole saw GCSE take-up fall from over 30,000 to under 3,000 entries last year.

The dramatic decline in design & technology could go unnoticed due to a decision by Ofqual to base its official analysis and report on unpublished data in which the classification of D&T subjects has been changed.

Its report indicates a fall of 9,490 studying design & technology, while the full data tables published alongside the report indicate a decline of around 38,000, which is the biggest decline in all GCSE subject entries in 2018. Physical education is second, with losses of nearly 25,000.

All arts subjects saw a fall in take-up, with music proving the most resilient and media/film/TV studies seeing the steepest decline.

The loss of A level entrants, however, masks a much wider decline in post-16 arts studies and the latest Ofqual figures reveal a dramatic decline in the number of young people studying the arts after GCSEs.

Take-up of AS levels in all subjects has declined significantly since they no longer contribute towards A level qualifications. Arts subjects are no exception.

Speaking at a parliamentary select committee hearing last week, Education Minister Nick Gibb doubled down on his commitment to the EBacc and said concerns the policy is driving out the arts are “simply not true”.

When questioned whether young people were missing out on a more rounded curriculum by dropping the arts at GCSE, he said there had been no change in the proportion of students taking at least one arts subject at GCSE since 2010.

The Minister also said he was “resistant” to changing the EBacc and the measure was “best left well alone”.

“As soon as you start adding subjects you increase its size or you damage the uptake of other core subjects,” he said. “My view is you can’t use the same lever of the EBacc to solve all issues.”

It was pointed out that the EBacc had already been extended to introduce computer science, so the same could be done for Design and Technology or arts subjects. In response, Gibb said that there was “something different about the digital world that we’re moving into”.

Update 31/05/18 - Ofqual contacted AP to explain that although the headline figures in the published data tables are accurate, its analysis of D&T in its summary report is not based on these figures, but in fact relates to an unpublished data set in which 'D&T: food technology' has been re-classified. Ofqual has since added an explanatory note to the data tables and the report on the government website to flag up this discrepancy. This article was adjusted to reflect Ofqual's explanation.

I am not sticking up for the EBacc, or saying that arts subjects are not in decline... But what is the justification for including D&T subjects in your definition of 'arts subjects'? D&T is an order of magnitude the size of the others. Both DFE and The Education Policy Institute don't class D&T as arts subject. People might see Textiles or Graphics as sufficiently 'artsy' enough to count, but Electronics? Systems & Control? Product design? Food Technology? Does this not undercut your argument and give critics an easy way to dismiss you?
You’ve raised a very good point, which is a significant issue in the whole EBacc debate. In fact there are three reasons why I am swayed to view design & technology as an ‘arts’ subject. Firstly, I think it is important to constantly reinforce the role of the arts within the broader creative industries, and whilst ‘design and technology’ is at the interface with ‘industry’, it is nonetheless a part of the continuum of creative activity. To separate it implies that the arts are somehow ‘fluffier’ than other creative disciplines – a contributor to ‘leisure and pleasure’ rather than ‘work and industry’. It’s a distinction that the government seems keen to pursue, having effectively ‘downgraded’ the arts (https://www.artsprofessional.co.uk/news/arts-and-culture-downgraded-ministerial-restructure) by placing the sector in the portfolio of the Parliamentary Under Secretary of State for Arts, Heritage and Tourism, separating it from the Creative Industries, which remain in the portfolio of the Minister of State. The significance of this was thrown into stark relief when the Sector Deal for the creative industries left the arts out in the cold (https://www.artsprofessional.co.uk/news/arts-side-lined-sector-deal-creative-industries) Secondly, I believe definitions of the arts can introduce unhelpful hierarchies. For example, opera and musical theatre, classical and popular music, digital art and graphic design, maybe? Or perhaps the most interesting example in this context would be art and craft. Exam board AQA describes its design & technology GCSE as giving students the opportunity to “use their creativity and imagination to design and make prototypes that solve real and relevant problems”. I would argue that a student who applies their creativity to a real world problem should be categorised in the same way as, say, a sculptor or craftsperson producing a different form of creative output. Finally, I am unswayed by the DfE’s own classification of the arts, as in my experience government classifications are created to serve their own political ends. If the arts sector fails to embrace design & technology, then it is cut adrift with no classification at all. Despite ‘food technology’ and ‘electronics’ being routes within D&T, Government has already excluded it from classification as a ‘science’, which would have meant its inclusion in the EBacc. Excluding design & technology from the EBacc is also inconsistent with the decision to include computing by classifying it as a ‘science’, though arguably it has much more to do with maths (data, algorithms and boolean logic, for example) and languages (coding). If the ‘technology’ bit isn’t sufficient for D&T to be classified as a science, then presumably the ‘design’ bit means it must be an arts subject!
Thank you for the comprehensive reply Liz! The three points you make resonate with me and I'm sure others though I'll be honest I do not hear them made very often in the debate (hence my original question). It is a surprise to see D&T is such dire straits when craft/hack/DIY/fashion/foodie businesses and culture seem to be having a popular surge, perhaps only on a small scale but still. Particularly dispiriting is the final double standard you point out around the "leeway" seemingly extended for computing, which has been lumped in as an "honorary" science, of sorts. Happy to bend the rules where it suits, I suppose. (Without even getting into the role/definition of English Literature...)