A cross-party parliamentary report says it is “time to recognise the powerful contribution the arts can make to health and wellbeing”. 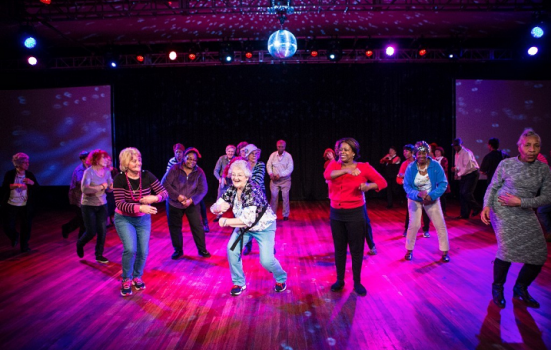 Older people dancing as part of the 'Dance to Health' programme
Photo:

Trainee doctors should study the impact of arts and culture on health and wellbeing, a cross-party parliamentary group has said.

After two years of assessing the impact of using museum visits, dance classes and other arts interventions in healthcare settings, a parliamentary inquiry has concluded the arts can help the health service save money, tackle long-term conditions and support “longer lives better lived”.

In a new report, the All Party Parliamentary Group on Arts, Health and Wellbeing (APPGAHW) implores the Government’s culture, health and education secretaries to develop a cross-governmental arts in health strategy.

It also calls on Arts Council England (ACE) to support arts organisations in making health and wellbeing outcomes integral to their work.

“We believe this material compellingly demonstrates the opportunities that exist but have yet to be seized widely,” writes Lord Howarth of Newport, Co-Chair of the APPGAHW, in the forward of the report.

“As it is, the United Kingdom is still very far from realising more than a small modicum of the potential contribution of the arts to health and wellbeing.”

He adds: “The conundrum that we have found ourselves pondering is why, if there is so much evidence of the efficacy of the arts in health and social care, it is so little appreciated and acted upon.”

The report, ‘Creative Health: The Arts for Health and Wellbeing’, assesses current research on the impact of arts in health on different stages of life, and makes a series of recommendations on improving policy and practice.

Chief among these is the creation of a new “strategic centre” to support the advance of good practice, promote collaboration and inform policy and delivery. Intended to be a gathering of networks, rather than a physical building, the centre would aim to fill knowledge gaps about the impact of arts in health programmes and encourage coordinated approaches to funding.

The report also calls on ACE to identify health and wellbeing as a priority in its ten-year strategy for 2020-2030, and says additional funding is not necessary to support “significant extensions of the work we would like to see”.

The conclusions chime with recent arts in health initiatives, including a dance-based falls prevention programme that was found to be more cost-effective than the NHS alternative, and a healthcare provider in Cheshire that has committed to prescribing singing and other artforms to treat conditions such as asthma.

Acknowledging proponents of arts in health have “too often not made their case as well as they should,” the report speculates on the current barriers to extended collaboration.

One suggestion is arts organisations have not embraced arts and health to the same extent that they have embraced education. But the report also notes that discontinuities of funding – and “large-scale withdrawal of funding” in some parts of the country – have “genuinely prevented” arts organisations from supporting health and social services.

“Local authorities, even before they were under the present draconian pressure to reduce expenditure, have not given high priority to spending on the arts,” Lord Howarth writes.

He also suggests the medical sector is reluctant to prescribe art-based interventions given their assessments of arts in health evaluations, which are not suited to using large-scale randomised controlled trials.

This thinking echoes comments by Dr Cliff Richards, former Chair of NHS Halton Clinical Commissioning Group, the Cheshire healthcare provider which has begun prescribing art-based interventions. He told AP the arts are “usually seen as fluff”, as people working in healthcare look at the evidence from “a scientific point of view” and believe the research evidence “isn’t as strong as it should be”.

The report ends with aspirations that the Government’s explicit commitment to respond to the inquiry’s recommendations, made in last year’s Culture White Paper, will result in a dedicated cross-party consensus.

“It is time to recognise the powerful contribution the arts can make to health and wellbeing,” Lord Howarth adds.