National Theatre partnerships with theatres around the country are creating an opportunity for them to share and compare experiences and ideas across a mix of scales, locations and financial models. Lisa Burger explains what’s going on. 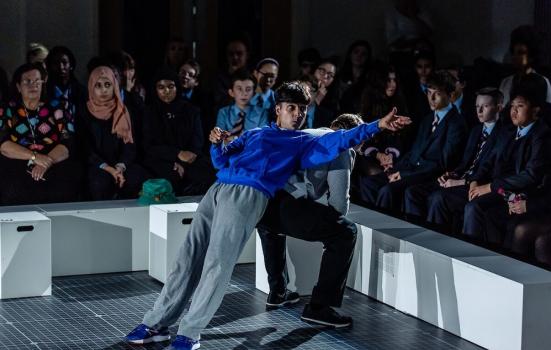 A performance of ‘The Curious Incident of the Dog in the Night-Time’ that toured 100 schools
Photo:

Broadening and growing local audiences for drama is at the heart of Theatre Nation Partnerships (TNP), a multi-year collaboration between the National Theatre (NT) and partner theatres in six areas around the country. Now entering its third year, the project set out to bring about change through a targeted programme of touring, work with schools and community creativity. But the impact is much broader than this. The efforts of partners to understand, value and combine the best of one another’s practice are laying the groundwork for a thriving local ecology.

It is fair to say that we are not the most obvious set of collaborators – the partner group includes a 500-seat subsidised producing theatre, a 2,000-seat commercial receiving house and even a theatre which hasn’t been built yet. But it is increasingly clear that the opportunity to share and compare approaches across a mix of scales, locations and financial models has been the programme’s greatest strength.

I’m particularly excited by the emerging relationship between the subsidised Sunderland Culture and ATG’s Sunderland Empire – from developing a shared approach to programming drama for local audiences, to planning creative learning activity with local schools and families.

The mix of people involved from each theatre has been important too. The partnership relies on buy-in and communication at all levels of seniority and we are actively seeking to break down the silos between programming, marketing and engagement teams.

Three times a year everybody working on Theatre Nation Partnerships comes together in person. These meetings develop and cross-fertilise strategic thinking and ideas among partners. Where the NT can offer a workshop on digital marketing, Queen’s Theatre Hornchurch can provide expertise in dementia friendly performances and Theatre Royal Wakefield can share their experience of becoming a Theatre of Sanctuary. Candour is welcome and stealing the best bits from each other is encouraged.

Schools are a priority

Addressing the troubling decline of drama and creativity in schools is a huge priority for us and Theatre Nation Partnerships has shown that designing an engagement pathway back to the theatre for schools can catalyse change.

A specially adapted production of ‘The Curious Incident of the Dog in the Night-Time’ has toured into 100 priority schools across the six areas and reached over 25,000 young people. The tour allowed teachers and senior stakeholders to see the impact of high-quality work on students and offered an opportunity for partner theatres to forge strong relationships with their local schools.

This quickly delivered results on our touring production of ‘Macbeth’, which saw a huge uplift in schools’ attendance at these theatres – 43% of attenders in partnership areas against a 29% tour average. One of the clearest examples is Khalsa Academy, a school in Wolverhampton which did not have a drama programme and had not previously engaged with Wolverhampton Grand Theatre. After Curious, they established a new drama department and attended Macbeth with a GCSE year group.

Developing relationships with local communities has been at the core of the network’s approach to growing drama audiences. At The Lowry, newly recruited community ambassadors could offer £5 tickets for ‘Macbeth’ to fellow residents of Ordsall, Eccles and Little Hulton. More recently, an expanded group of community ambassadors welcomed 145 people from the same areas to ‘A Taste of Honey’ for a Salford people’s night, hosted by and for the people most local to the Lowry.

Alongside this work on touring theatre productions, both Queen’s Theatre Hornchurch and Cast in Doncaster are part of Public Acts. That's the NT’s programme to create ambitious new works of participatory theatre together with theatres and local community organisations. Following a bespoke programme of workshops and creating, everyone is invited to come together to perform in flagship productions at the end of each year.

All the partners have considered these initiatives as part of a long-term, curated pathway of engagement to attract and sustain audiences. The box office figures have been impressive – consistently above our tour averages for first time bookers. For the UK tour of ‘Macbeth’, 35% of audiences were first time bookers, rising to an average of 55% in TNP areas. In Wolverhampton, the ‘Macbeth’ audience was the largest for a Shakespeare title in the theatre’s history and the proportion of South Asian bookers grew from 1.5% to 10.5% by the end of the run. We’ve seen similar patterns elsewhere: 65% of the bookers for War Horse at The Lowry and 45% of the bookers at Sunderland Empire were new bookers to the venue.

These are promising patterns for the NT as a touring producer. Our next step will be to explore how we dovetail our work more effectively with that of other producers and community organisations, and build further connections across the sector.

A new model of collaboration

The National Theatre is increasingly building productions from the ground up with theatres and companies from around the UK. Our upcoming tour of Gary Owen’s new play ‘Romeo and Julie’ is co-created with the Sherman in Cardiff and we’re exploring how each of the Theatre Nation Partners who receive the tour can have a deeper relationship with that piece of work. How can we involve each venue in decision-making? Where can the NT create even more room for tailored approaches to audience development that respond to the landscape locally?

The testing and learning together over the next year will be demanding – we’re very different organisations with all sorts of contradictory priorities and pressures. But I feel sure that unlocking new ways of collaborating and combining our collective expertise and imagination is vital to the future of touring theatre.