Bonding with the Bard: how Shakespeare brought East Londoners closer together

Can theatres really forge deep and meaningful connections with their local communities across age, class and ethnicity? Douglas Rintoul explains how Queen’s Theatre Hornchurch has done just that. 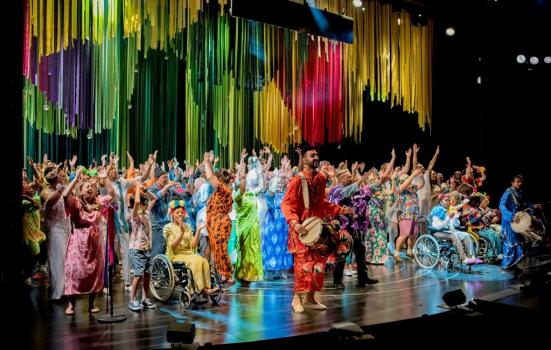 'As You Like It' at Queen's Theatre, Hornchurch
Photo:

Queen’s Theatre Hornchurch (QTH) has a long history of producing large-scale community musicals and local engagement, but the National Theatre’s (NT) Public Acts programme has raised our game and everything we now do is seen through the prism of our experience.

The collaboration between a large national cultural institution, a much smaller regional theatre and numerous partners was naturally, at times, bumpy

Public Acts is the NT’s innovative initiative to create ambitious new works of participatory theatre through sustained partnerships with theatres and community organisations across the UK. In 2017 the Queen’s Theatre was invited to be the first partner in the programme. We formed a team involving both NT and QTH staff, who scoured Greater London for community organisations to take part in the project. They had to reflect the diversity of our community and feel confident that the project was going to present their members with a new, important opportunity. This meant we had to cast our net wide and site visits were a priority. We learned more about our community than ever before, creating valuable new connections along the way.

We settled on eight1 organisations and for two years worked closely with these partners, adding a ninth – Queen’s Community Group – in 2019. All of the organisations were already delivering visionary work within their own communities, so Public Acts brought theatre to their table as a complimentary toolkit to serve their mission.

We created bespoke programmes for each organisation, including weekly workshops, theatre trips and opportunities for socialising and creating together. At the end of each year, members were invited to come together to perform in a production. Last year this was ‘Pericles’ at the NT; this year it was ‘As You Like It’ at QTH.

The unity around the making of a show cultivated a profound sense of connection as participants collectively rose to the challenge of performing with all the same levels of professionalism and excellence as any other show at the NT or QTH. The collaboration between a large national cultural institution, a much smaller regional theatre and numerous partners was naturally, at times, bumpy, but the driving force and the glue was the participants and the beautiful story we were telling together.

The adaption of ‘As You Like It’ came from the Public Theatre in New York. We chose it because it marked an evolution in our history of popular musical adaptations of Shakespeare (‘From a Jack to a King’ and ‘Forbidden Planet’). The setting and the lyrics were modern, but the dialogue was Shakespeare’s. For many, this was their first time speaking verse. Participants connected deeply with the play’s themes of exile, self-expression, identity and community.

Five professional performers were joined by 68 of the 130 community cast members, who played significant roles including Celia, Duke Frederick and Phoebe. The show had six large-scale, full-company, show-stopping numbers. All required harmony singing, choreography and complex emotional stakes. There was no shying away from the uncompromising demands of the show and the journey was not easy.

Some never imagined they would have the courage to be on stage in front of an audience, let alone sing, dance or speak Shakespeare. One member of a ‘Golden Years’ group said "you’ll never get me on that stage". By the end we couldn’t get her off. A brilliant younger member used to find it very difficult leaving home because of anxiety – now they are pursuing a career in the arts. Another member has gone on to secure employment, having overcome significant health barriers.

These are not isolated examples. The project built confidence, helped to develop new skills and enabled participants to be seen and to be brilliant.

Here in outer East London there are issues around social cohesion, but ‘As You Like It’ was a bold provocation of how we can be and our performers, especially our local performers, were immensely proud of this groundbreaking event being in Hornchurch. Participants forged deep and meaningful connections across age, class and ethnicity, and the generosity and joy gave us hope in the possibility of creating true communities. ‘As You Like It’ was both bridge-building and place-making.

QTH lead produced ‘As You Like It’. All of our staff and many of our local artists and creatives were involved. The skills gained through running such a vast project remain in the organisation and it has made us fearless when thinking about what we do, how we do it and with whom. We now look at all projects through the prism of Public Acts. How can we reach further into our communities? How can we work harder at inclusion?

For the participants, there is a continuing programme of engagement at the NT.

Here at QTH we have already worked with a wider group from our local organisation, the Havering Asian Social Welfare Association, through a partnership with the theatre company Spare Tyre, who collaborated with participants on their new show ‘Love Unspoken’.

A member of one of the central London organisations is on a placement in our wardrobe department.

Other participants have already appeared on our stage as supernumeraries in our revival of  'One Man Two Guvnors'.

Many use the building – its café and public spaces – for meet ups. All our staff know them and are thrilled to see them. Public Acts moves to Cast in Doncaster this year, building on the success of its foundation cycle here in London.

Bonding with the Bard: how Shakespeare brought East Londoners closer together
Back on the radar