Can a small touring company benefit from running a Friends scheme? Liz Hill examines the opportunities and the challenges. 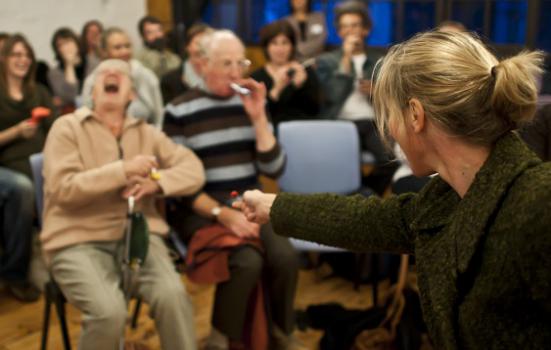 With philanthropy now centre stage in the battle to replace dwindling national and local government arts funding, many eyes have turned towards Friends schemes as offering potential for cultivating new income streams. And quite rightly so. Tate Members have contributed over £20m to Tate over the past five years alone from a membership base of over 100,000, and other successful role models abound. But there is a danger that a Friends scheme can be seen as a one-size-fits-all solution to plugging a funding gap. It isn’t, and for smaller touring companies it’s important to recognise the significant challenges as well as the opportunities that such a scheme might bring.

The value of Friends

The key to success with a Friends scheme is being crystal clear at the outset about what you’re trying to achieve, and setting yourself some smart objectives.

The vision of a Friends scheme is a seductive one. People who join such schemes are in effect flagging themselves up as enthusiasts for an organisation’s work, and the organisation can capture and benefit from this enthusiasm in many different ways. But small touring companies with limited resources should carefully assess their potential for doing so – and the related costs – before joining the bandwagon. Whilst a Friends scheme can be a potential money-spinner, squeezing the money out is an art in itself.

Membership fee income: Friends schemes can produce valuable revenues from membership fees, but it’s important to be realistic. In your wildest dreams, how many people do you think might join? And how much might they each pay? This calculation indicates the maximum financial potential of the scheme. Divide this number by ten for an essential reality check as to what might be the more likely scenario. And finally, work out how much it might cost you in terms of staff/systems/marketing to generate that many members, deliver the member benefits you are offering, renew memberships annually and continue marketing to attract new members to replace those who lapse. Phew.

If you’ve still got a positive number after those costs have been deducted, then you may make some money from membership fees. But it’s not easy. A wide range of factors can work against small touring companies achieving this. For example, dispersed geographic catchment areas; incomplete customer data; no computerised box office system; unsophisticated small venue marketing; intermittent relationships with audiences and venues; and difficulties offering consistent member benefits across all venues.

Other support: An alternative for some touring companies might be a free-to-join scheme, through which the support of a group of Friends could be harnessed, but without the associated costs and hassle. Think of a Friends scheme as a structure through which an organisation gives audiences access to some tangible and/or intangible extra benefits in exchange for their support. Other forms of support can be equally or even more valuable than a membership fee:

A Friends scheme must be a two-way street. In order to harness this support and reap these potential rewards, the organisation must offer something in exchange, even if the member isn’t paying to join. For small touring companies with no box office, it’s usually impossible to offer popular tangible benefits, such as ticket discounts and priority booking, which are under the control of the venue. Fortunately though, not everyone who joins a Friends scheme does so for what they can get out of it. Some are simply looking for that warm fuzzy feeling of being more involved with an organisation and its work and will value a vehicle through which they can demonstrate their support. In that case, you may be able to satisfy your Friends with nothing more tangible in return than a few newsletters and some invitations to ‘meet the company’ when you are on tour. Why not start by doing some informal research among audiences to reveal what they would value from you? If you can identify a package of benefits or opportunities that they would value, but would cost you little, if anything, to deliver, then a Friends scheme could be a good and viable option for your company.

The key to success with a Friends scheme is being crystal clear at the outset about what you’re trying to achieve, and setting yourself some smart objectives. Whilst generating cold hard cash is likely to be a long-term driver for establishing a scheme, this is not the whole story. Shorter-term goals are important too. Building a loyal supporter base through a Friends scheme might not deliver the revenues straight away, but could help you to establish a stronger platform on which to base strategies for growing an income stream in the future.

This article, sponsored and contributed by Twine, is the third in a series exploring the fundraising challenges faced by small touring theatre companies.