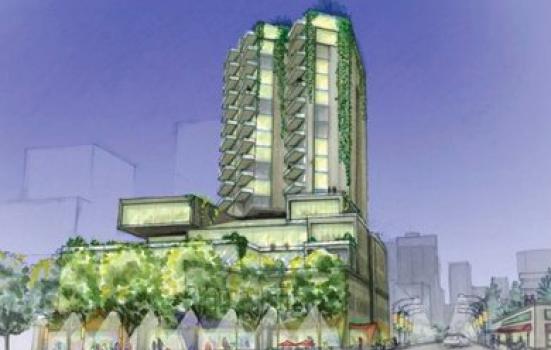 An artists’ impression of Quarter’s Project in Edmonton, Canada, an urban arts village with residential and studio space for multi-generational, mixed-income artists of all disciplines

According to a NESTA report, UK life expectancy is rising by nearly three months a year. Because our chronological age now is equivalent to a decade younger in the lives of our parents, today’s 60-year-old is likely to be thinking and feeling more like a 50-year old of a generation ago. This sea change will have a radical impact on everything from when and how people in general choose to take up formal education, to the quality of their contributions to local communities and society in their senior years.

Their expressive skills, imagination and creativity are resources that can continue to be drawn on to the very end of their lives, for their own and others’ benefit

Importantly, this knowledge is a key factor in redefining notions of retirement. Artists in their seventies and beyond can be at the height of their powers at a time when the convention is to expect a slowing down or even an end to professional activities. However, as 78-year old pop artist Derek Boshier remarked, artists don’t retire, they just go on doing what they’ve always done for as long as they can. And while salaried folk in the cultural industries tend to look forward to a productive retirement in which the rough edges of their elder years are cushioned by pensions they’ve been able to save for, it’s a different situation for the thousands of artists, performers, poets and writers.

The majority of the UK’s creative people don’t gain the commercial success needed to sustain productive and comfortable lives into old age, and are heavily reliant on state pensions. In the performing arts, 50% of professional musicians take home under £20,000 a year, half of Equity members make £5,000 from their professional work, and the average annual income for composers from commissions is £3,689. It’s not much better for writers who earn as little as £11,000 a year and visual artists with an annual average income of £10,000. The net result of a lifetime’s work in low-paid occupations means that most creative people live below the UK’s acknowledged £17,000 a year poverty line. They are thus less likely to own property and less than a third will have saved for a pension.

Significantly, the expertise and insight of creative people who have the benefit of a lifetime’s art practice behind them is currently barely capitalised on. There’s no indication yet that cultural policies will nurture and sustain practitioners during the full span of their arts careers. In most arts policies and talent development schemes it’s the creativity of young artists that is sought after, judged to be where all the innovation and cutting-edge work goes on.

But evidence from NESTA suggests that in future more attention will need to be paid within the UK’s cultural infrastructures to strategies that will realise the creativity of a far wider pool, including the seasoned arts professionals. With a lifetime of practice behind them, these are the people with a heightened facility for handling concepts, materials and contexts, whose skills have been honed over time. The contributions that these later-years practitioners can make to the vitality and creative insight within local communities and regions is being overlooked. They need to be harnessed as part of cultural capital.

In North America the concept of providing retirement living in the performing arts has been around for a long time. Motion Picture and Television Fund’s Country House in Los Angeles was built over 25 years ago. In Canada, the PAL (Performing Arts Lodge) Foundation cares for and sustains the creative vitality of professional artists. From the first PAL Place in Toronto in 1993 has grown a network of eight autonomous lodges that provide bespoke programmes and services for senior and disadvantaged members and associates of Canada’s professional artists’ community, including affordable accommodation and services to enhance wellbeing. The rationale is that: “We reward the artists who delight us with our applause, and often assume that success in the arts brings financial security. But very few members of the performing arts community arrive at the end of their career with an adequate pension and other resources.” PAL’s strategic supporters include professional bodies and unions for actors and creative people, ensuring ongoing exchange on the sector’s changing needs and circumstances.

Inspired by such initiatives and her own circumstances, arts consultant Esther Salamon has begun research that will make the case for an innovative arts and housing initiative in the north east of England. Designed for older creative people, the embryonic ‘Independent Creative Living’ initiative is aimed at meeting the needs of creative people who want to retain their independence and be self-reliant in a supportive environment as they grow older, while ensuring they continue to develop their creativity and productivity as active members of a cultural community. Notably, RSA research shows that 20% of the population overall feel held back by their circumstances and environment. Unable to satisfy their creative urge, the danger is that talents are wasted.

Clearly too, there is room for the environment for creativity and innovation to be extended. As Esther Salamon comments: “Imagine the creativity and new thinking that could be developed together, across the generations? Although social and co-housing schemes for older people exist, there is as yet nothing being developed in the North East that grasps the potential for enriching cultural capital by drawing together the local ageing and experienced artistic community into a cohesive and supportive structure. Providing opportunities for elder artists and arts professionals to continue making new work alongside others will ensure innovation continues to flourish, while combating the negative impact of creative stagnation, boredom, isolation and loneliness.”

To share experiences of related schemes and research or discover more about the Independent Creative Living initiative contact esther@artforconferences.com