Art won’t look after itself

As the Lords debate shines a spotlight on the Government’s support of artists, Susan Jones reviews the current situation. 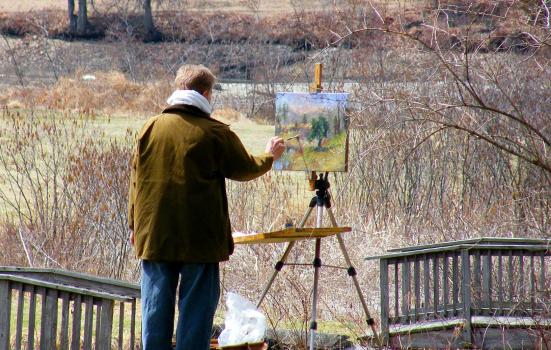 In the economic melt-down that has seen public funding to the arts cut by a third since 2010, few arts leaders or politicians, in their haste to preserve galleries, museums and theatres, have stopped to consider the devastating impact such reductions are having on the livelihoods of the individual creators of art – the artists, the writers and the composers.

This week’s debate in the House of Lords generated by the Earl of Clancarty, aka artist Nick Trench, has therefore created a significant review point, as arts policies are under formulation in the run up to what may be the messiest general election results ever.

Launching the debate, Nick Trench asserted that: “It is the individual creative vision which has determined the artistic and cultural landscape of this country. Without the fine artist, there would be no Tate Modern; without the playwright, there would be no contemporary theatre; without composers and musicians, there would be no concert halls.” Tate Modern now welcomes some 5 million visitors annually, raising the question of whether it should be doing far more than it currently does to acknowledge this, through explicit support to the critical mass of artists.

Nick Trench argued for policies that “put the artist before the audience, because logically the art comes first and an audience for a new work may take a long time to develop: the audience should not be socially engineered”.

The supposed champion of artists, the Arts Council, gives scant mention to artists in its policies since 2011. As crossbench peer Beeban Kidron pointed out in the debate, such top-down policies give arts gatekeepers far too much power: “In this funding model, money, whether public or private, flows from a central distributor to arts organisations that in turn offer the opportunity for individual artists to make or show work. However, as in many similar trickle-down structures, by the time the funds have trickled down, there is very little left for those at the bottom of the pile, in this case the individual artist.”

Whilst the cultural sector grew by nearly 10% in 2013 – three times the rate of the wider UK economy – the average commission fee for a composer is a mere £1,392 and artists’ average incomes from art have reduced by £6,000 in real terms since 1997.

the financial hurdle of paid-for art education is of huge concern in terms of the future social make-up of artists.

It was left to the Government’s DCMS spokesperson, Lib Dem Judith Jolly to wheel out the generic Arts Council England (ACE) statistics to demonstrate how supporting individual artists is central to the ten-year Great Art and Culture for Everyone strategy. Such policies have essentially marginalised the ‘at-large’ participatory and engagement-based practices in order to preserve diminishing funds for buildings and civic pride. 48% of ACE’s visual arts budget in the national portfolio settlement period 2012-15 was allocated to the ‘Top 20′ galleries and production agencies. And the 2015-18 agreements will see spend on the ‘top’ group increase to 68% of the entire visual arts budget. The small, flexible and responsive, the artist-run, have been edited out, left to the vagaries of officer-assessed, occasional grants. Other than the tiny fractions of money direct to individual artists through schemes such as Grants for the Arts, ACE claims that support to artists comes through various funding partner organisations: “…such as the 111 national portfolio organisations that work in visual arts nationwide.”

But as the a-n/AIR Paying artists campaign has revealed, many of these funded organisations currently don’t believe they need to pay artists at all. That 63% of artists had turned down an exhibition on affordability grounds is a stark reminder if ever one was needed that the livelihoods of artists are never safe if left in the hands of such mediators. And whilst it is indeed laudable that ACE now insists that national portfolio funding recipients provide ‘fair pay for artists’, it is likely to be far later in the life of the next funding period (2015-18) before artists’ livelihoods feel any benefit.

In the burgeoning age of the digital, it is vital that agencies operate ethically by acknowledging the value of creators. As Lib Dem Lord Maclennan asserted: “Copyright is the mechanism through which writers, composers and music creators are paid for their work. Royalties provide essential income for creators so that they can grow and invest in themselves and their businesses.” The aggressive move of the Copyright Licencing Agency, which is “bullying artists, photographers and illustrators and writers into accepting unreasonable conditions for publication by signing away copyright within distribution of secondary rights” is being hotly contested on behalf of these creators by DACS: Design and Artists Copyright Society.

Comments arising from this year’s award of Oscars and BAFTAs have highlighted the issue of growing elitism in the arts – increasingly only those with money can afford to practice or fully participate in the arts. Despite James Blunt’s spirited rebuttal, that his public school education was actually more of a hindrance than a help, the financial hurdle of paid-for art education is of huge concern in terms of the future social make-up of artists.

Grayson Perry has been moved to speak up about his working class upbringing – something I was surprised to have to do myself recently to someone working professionally in the arts who clearly didn’t share my lower social status. Perry says: “For so many children, doing art… isn’t something they come across until they are taught it at school. Not everyone’s mother sits down with scissors and paper and makes collages with them… The idea that art will somehow look after itself – that society will breed untaught geniuses – is rubbish.”

Diversity amongst great professional artists, of which Perry surely must be counted, will only come in future if there is equality of access to inspiring art teachers and good arts education in schools. As @ISM_music tweeted: “#artists/#composers are not from any walk of life if they have to subsidise their role in society”.

Susan Jones is a published writer, commentator and researcher on visual arts and artists' practice, and an adviser and consultant on and for visual artists and artist-led initiatives.
Tw @SusanJonesArts

Great article: Thank-you. Artists will soon all be posh ladies and gents supported by mama and papa as no one else will be able to do it. Thy will be too busy picking up work as they can, on a zero hours contract. We all know an arts career is unlikely to give you a cash rich lifestyle but if even arts organisations think artists and their families have the ability to live on thin air, what hopes is there?