Artist-led and community-focused projects are key to placemaking, says Susan Jones. Just look at Preston, where the In Certain Places programme has been doing it for 12 years. 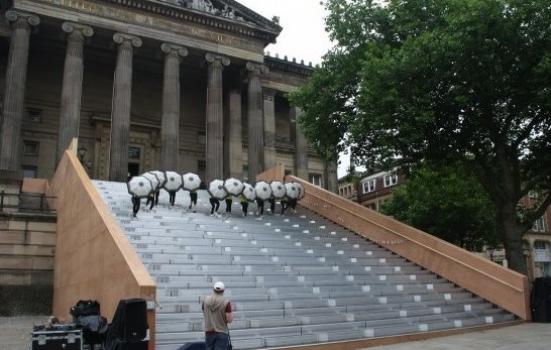 The desire to boost both economic investment, regeneration and community interaction in cities and towns such as Liverpool, Folkestone, Glasgow and Manchester has often been realised through festivals or biennials. These kind of ventures, as Dany Louise outlined in her article for AP, tick a lot of boxes – high-value visitors spending money in the local economy, animation of a town or city centre, contribution to an improved sense of place, and so on. Arts Council England’s Creative People and Places initiative is another strategic arts solution, specifically designed to tackle low levels of audience take-up for more traditional arts programmes.

Initiated in 2003 In Certain Places began as an arts collaboration between the Harris Museum and Art Gallery and the University of Central Lancashire (UCLan), and is now based exclusively at UCLan, which functions quite differently from these models. Led by artist/curators Elaine Speight and Charles Quick, it is far less about prescribed outcomes and performance indicators, and more concerned with what Preston City Council’s Principal Urban Designer Nigel Roberts describes as “nudging things along”. Elaine Speight calls this “a meandering but critical conversation with the city’s stakeholders in which a procession of ‘outside’ people including economists, urbanists, cultural sociologists, architects, planners, designers, curators, historians and artists are invited to listen and respond”.

The shortlisting of London-based collective Assemble for the Turner Prize this year signalls the assimilation of design and architecture into notions of contemporary art. But Certain Places was certainly ahead of the curve two years ago, when it worked in partnership with architectural practice Research Design to create the 'Harris Flights' as a temporary new front entrance to the city’s neo-classical museum. Alongside very tangible outcomes (museum visitors were up by 70%), this showed new ways of making a public place work (see photo above). In the eyes of the local tourist information centre it brought art to the people. In the same vein, this summer will see Beijing-based the People’s Architecture Office develop a temporary architectural intervention that encourages greater movement between the city centre and the university campus.

While this and other international names bring higher visibility and kudos to the city, and Brighton-based Blast Theory’s chase game, played simultaneously by online and on-the-street players, brought the world to Preston virtually, most In Certain Places projects build the capacity and reputations of participatory or socially engaged artists who live closer to home. David Henckel’s collaboration with a local craft brewery resulted in the production of The Transit of Venus ale to mark the twenty-year cycle of the Preston Guild. And Chris Davis put a computer into the home of the Moores family on a local housing estate, so they could participate over a seventeen-month period in temporary public artworks under development in the city centre.

The recent publication of Subplots to a City: Ten Years of Art in Certain Places (and the adjunct ‘Art of Dwelling’ symposium) set the project’s ambitions and particular sensibilities into a wider context. While the book recorded views and insight on the projects to date (and usefully encompassed voices that were both affirmative and critical), the symposium revealed a burgeoning peer network in which grassroots, situation-based arts activism is steadily emerging as an antidote to the widespread instrumentalisation of art. It described how artists and curators in smaller places or enclaves in different parts of the UK are thinking laterally and finding different methods of producing and articulating the value of art in the public domain.

Deveron Arts, based in the market town of Huntly in north-east Scotland, has been working over the last 20 years with a population of just 4,500. Rather than setting up an arts building as a focus of attention, the whole town has been their venue. Artists of all disciplines come from around the world to live and work there, using the supermarkets, streets, churches, garages and bothies around and about as their studios and venues. For artist-led Pendle-based In-Situ the vision is to “allow art to be a part of the everyday life”. Their ambitions are definitely about fostering resilience and innovation in the community so people “feel proud, to speak and act with confidence”, and are actively engaged in their futures.

In a period of continued austerity, the requirement for arts ventures to be sustainable is writ large in arts imperatives. However, with few exceptions, it’s the building-based arts infrastructures and traditional organisational hierarchies which get the regular funding, while the small-scale alternatives are confined to the margins, dependent on the generosity and drive of practitioners and occasional grants. It’s because of this, as the Warwick Commission on the Future of Cultural Value noted, that the fundamental place-shaping role, building and moulding local communities and identities often remains underdeveloped.

When discussing future cultural development 20 years ago, Charles Landry and Franco Bianchini in The Creative City made a similar case. They called on regeneration schemes to encompass new ways of talking in which normal routes and networks are set aside and for the setting up of more open systems which enable people of different skills and disciplines to talk and listen to each other and find “new ways of describing things”. The successes so far of In Certain Places present a persuasive argument for more support in future to go to artist-led and community-focused networks of practice which, through keeping a close ear to the ground, generate cultural capital through collaboration, critical reflection and intervention in the long-term making of place.