Artists’ precarity is not just about pay

In the pandemic, government and ACE built a defensive hedge around the most visible aspects of the arts infrastructure. Susan Jones thinks it’s time to dismantle it. 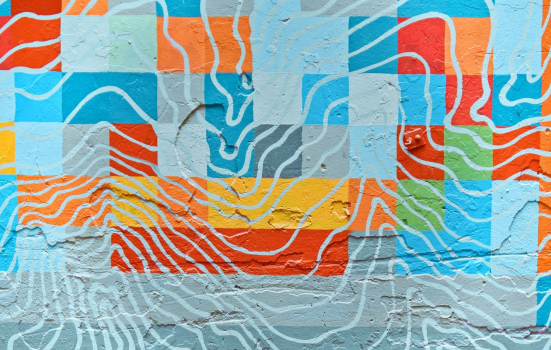 Staffers in institutions got time, space and money to address fragile business models and secure their futures. In contrast, exclusive and short-term emergency arts funding schemes for freelance artists failed to address their livelihood needs.

Early evidence from a new in-depth study demonstrating that the lives and artistic prospects of many artists positively improved in pandemic conditions offers clues to the substantial shifts in arts infrastructures necessary to honour and sustain the talents and vibrancy of the diverse artists’ constituency in future.

Poor pay for freelancers is most frequently cited as the reason for artists’ precarity and, on the face of it, visual artists suffered worst economically during the pandemic. An Acme studio-holders’ survey found three-quarters ineligible for the government’s self-employed SEISS fund, whereas only around a third of musicians were in this position.

Reasons for artists’ vulnerability are more complex than a negative bank balance. Unlike other freelancers in the creative industries, artists’ practices are a form of ongoing social enquiry dependent on excessive amounts of research and speculative working.

Visual artists aren’t much like small arts businesses where consistently pitching services and products to various and changing markets is the norm. In fact, as prior research confirms, visual artists who prioritise money-making and art world fame are the most likely to cease practising.

The portfolio careers expected of artists that create a circle of high-risk, low-paid work are a major cause of artists’ emotional precarity. The conflict between the intrinsic, socially orientated motivations that drive artists’ lives and practices and extrinsic values that make arts organisations’ business models viable undermines mental health and well-being.

Artists can be wracked by uncertainty, anguished about whether their practices are any good and, even when achieving success, whether they ever make anything worthy again. Arguably, the nature of creative practices is particularly attractive to neurodivergent (ND) individuals, including those with ADHD and bipolarity, hence higher levels amongst creative practitioners than in the wider population.

Artists’ emotional precarity is amplified, both by the arts infrastructure’s preferred systems such as the format for ACE’s National Lottery Project Grant application that preferences neurotypical brains, and the day-to-day complexity of juggling artistic development with family lives. 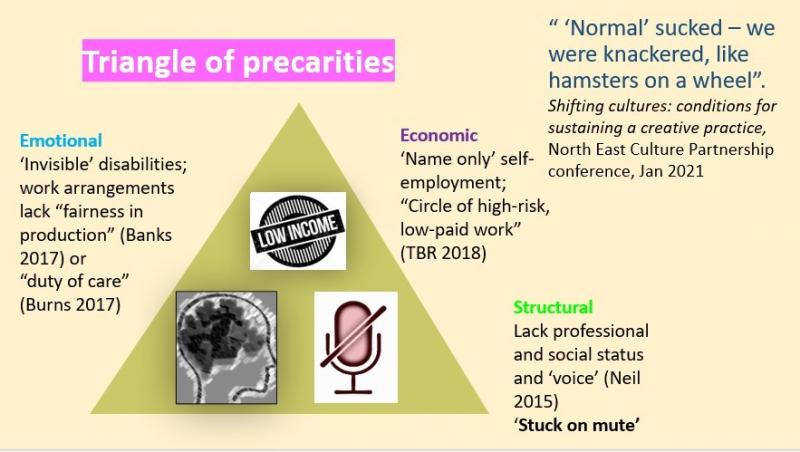 It's not cool to be difficult

There’s structural precarity for artists too, because although their talents and enduring practices are vital to the visual arts sector’s resilience, this is no mutually beneficial arts ecosystem. The infrastructure’s protectionist, mysterious ways restrict who becomes an artist in the first place, as well as artists’ ability to get ahead on merit.

Extreme gatekeeping and increasing use of the recommendation route over open calls make for vicarious careers. It’s common for curators to discourage artists from 'showing too early', selling work to the ‘wrong’ kinds of people through ‘unauthenticated’ places, including studios and fairs.

Non-negotiable contractual terms make it hard for artists to assert their professional rights and livelihood needs. As Angela McRobbie concluded, it’s not cool for artists to be difficult, they’re expected to keep their artistic misgivings and personal expectations under wraps.

A neoliberalist arts infrastructure is neither kind nor generous. Levels of financial resources and credibility attached to the welfare of individual artists are meagre and mean-spirited.

One illustration is the recent ACE’s Developing Your Creative Practice awards that benefitted fewer than 400 eligible creative practitioners from across the whole of England.

Opportunities for artists to realise creative ambitions are instead trickled down through a permanent hierarchy of institutions who get most of the arts policy cash. As ArtsProfessional’s salary surveys and research by Wayne Burrows confirms, reward levels in arts organisations are ‘in inverse proportion to their proximity to production’.

Treating freelancers as expendable, one-off service providers at fixed rates on a just-in-time basis is exploitative of artists’ talents and social contributions.

Arts funding agreements don’t require those who commission freelance artists to demonstrate a duty of care, nor what Mark Banks described as fairness in production, nor terms and conditions for artists to practice well that Nicola Naismith calls for. Nor, as Ele Belfiore concludes, do ethics feature in the sensibilities and practical terms applied to contemporary arrangements between artists and commissioners.

Visual artists are neither seen nor heard when policy decisions are made that affect their futures nor when artistic opportunity and support measures aimed at them are scoped.

The subtlety of artists’ professional development needs over a life cycle becomes translated into short-term projects that are easily dispensed with when budgets come under stress.

There’s a tendency for arts leaders to ventriloquise artists’ voices in consultations and advocacy. From time-to-time, a chosen few artists may be invited to focus groups, often held at times unsympathetic to artists’ working and personal lives and at the artists’ expense.

Combined with the exhausting levels of competition endemic in visual arts culture, this is a climate that mitigates against the camaraderie and solidarity needed to forge a strong, influential, enduring voice for artists.

Independent longitudinal research into visual artists’ livelihoods suggests that the extraordinary circumstances of the pandemic were surprisingly ‘good’ for artists. Released from the restrictions of the arts ‘normal’, literally thousands of them enjoyed newfound freedom to reflect, experiment and revitalise and strengthen their art practices and generate relationships supportive of them over the longer-term.

Here’s how one artist put it: “Covid is the best thing that’s ever happened to me. I was in a position I’d never been in before. I could make the work I wanted to make, with no restrictions. The security put things in a different perspective.”

Rather than the arts infrastructure’s over-subscribed micro commissions, one-off small grants and hardship funds, it was the no strings £10,000 grants to artists with individual and group studios through local authorities that provided vital R&D.

Artists benefitted from these unusual conditions that gave them the chance to dream and a 'moment for creative or professional breakthrough which had significant and lasting consequences'.

There are parallels between artists’ aspirations to forge flatter, welcoming, inclusive arts structures characterised by generosity and cooperation and the growing calls elsewhere for radical approaches to levelling up. As Ben Cooper among many others confirm, decentralisation of arts policy and funding to the grassroots is core, as are ambitions for environment that foster co-creation.

But, and as Slung Low’s Alan Lane eloquently argued, so too is abandoning the market-led arts economy that stifles human flourishing among those vital to making art happen, while restricting wider participation in the arts.