How do policies and prejudices around religious belief affect the cultural workforce? People of faith tell Martin Cox how they feel about being an artist involved in socially engaged arts. 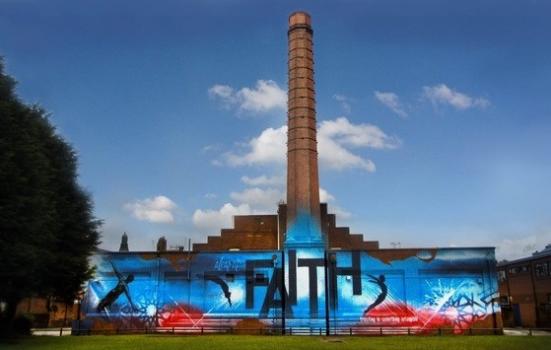 Voluntary work is the dark matter of the arts universe – intrinsic to almost every form of creativity yet invisible to the policymaker. I worry about the increasing exploitation of voluntary labour in the funded sector and the trend to abandon roles that concern social engagement to the effort of the unpaid intern. Voluntary work outside the funded sector is underappreciated, as are the dividends that artists derive from religious faith and its role in our wider cultural ecology.

Cultural policy has always had an ambiguous relationship with religious faith; eager to celebrate diversity, yet careful not to promote specific religious doctrine. Activities that function overtly as religious practice are generally considered the mandate of ‘faith-based’ organisations, beyond the scope of arts policy and funding.

There is thankfully flexibility – there has to be. How could we equitably represent the diverse cultural lives of our communities when, for so many, culture and religious faith are so inexorably intertwined? The porous edges of cultural policy occasionally allow investments to be made in arts activities that are simultaneously creative, community and faith based.

Yet flexibility towards faith is as problematic as it is positive. Confusion about the relationship between faith, culture and notions of diversity leads to inconsistencies, crass representations and often unintended inequalities in the funded arts. This is especially true in an environment where issues of diversity fall upon the grindstone of a monochrome, middle-class politically homogeneous art world. The question ‘why support this faith activity and not that?’ invites the sort of cognitive dissonance few cultural managers are compelled to reckon with.

As someone who is not a person of faith, I have until recently had an ambivalent attitude towards the role of faith in socially engaged cultural work. But as part of research for a PhD on alternative models for creative practice, I've recently been exploring unfunded, socially engaged arts activities. This has revealed the enabling role that religious faith plays in mobilising voluntary cultural labour outside the ‘faith-based’ box in which policy has it tethered.

I have interviewed a number of artists whose faith motivates voluntary, socially engaged participatory projects that have nothing at all to do with religion, religious ritual or the promotion of faith – work that is fundamentally secular in nature. While this work is in no way ‘faith based’, the connection between the artist’s practice and their religious belief is vivid and compelling.

One interviewee told me: “[I] believe that god has put us on this earth for specific reasons, and one of those reasons is to serve young people in the best way we know how, and the best way that I know how is through arts practice and engagement”.

Many of the artists involved in my study feel that to be paid would compromise rather than enable their particular form of ‘faith inspired’ socially engaged practice. They described the voluntary nature of what they do as accruing certain spiritual rewards that would be diminished if money were involved. One volunteer said: “…it does sometimes feel good that I didn't get paid… no one needs to know I didn't get paid. I'll get paid in other ways, in the spiritual sense… I'll be rewarded with it in ways I can't imagine right now’”.

Many feel that because their work is voluntary it is more effective at building relationships with people, participants and communities and securing the quality of its social benefit. One person explained: “We would never want it to become an organisation where we were paid because it would completely alter all the relationships within the group. It doesn’t work as a paid thing… If they know you’re doing it for the love of them, that’s different from doing it because you’re being paid”.

It is striking how religious faith functions as a powerful but often covert actor within the broader ecology of culture. I was amazed to discover how many participants in these ‘faith inspired’ arts projects (some of which have run for many years) went on to develop careers in the funded sector as artists, producers or arts managers, often unaware that their first foot in the door was made possible by an artist’s discrete relationship with spiritual faith.

Most of the ‘faith inspired’ artists I interviewed take measures to purge even the slightest suggestion of religion from their work, usually to avoid negative-preconceptions and suspicions of evangelism. They sense these attitudes coming from the funded arts world too. Paradoxically for some, being open about faith in the funded sphere invites the burden of representation being placed upon them by an arts world eager to pageant diversity in such a way that belies the structural inequalities that underpin it.

British graffiti artist Mohammed Ali is frustrated by efforts to shoehorn his work into a box that reduces it to a protected characteristic rather than recognise its message emitting from a wider social context: not a ‘graffiti artist’ but a ‘Muslim graffiti artist’, roped-off into the corner of a diversity display cabinet.

The socially engaged arts activities I have investigated operate outside the funded arts world under an entirely different system of value, unhindered by art-world vanities or the bureaucracy of public funding. Many artists I have spoken with feel that the funded arts world is not a place where they can be open about religious belief and see a system that is less responsive to socially engaged work.

Several questions emerge from these conversations; how can the funded and voluntary arts worlds become more connected in a prosperous ecology of culture? How can arts funding support voluntary work on its own terms rather than exploit it in the interests of funded institutions? Can the funded sector be responsive to social engagement while maintaining its traditional hierarchies of cultural value?

And perhaps most significant of all, can diversity be achieved without addressing the unspoken prejudices that exist among the supposedly progressive cultural workforce?