The potential of grassroots culture 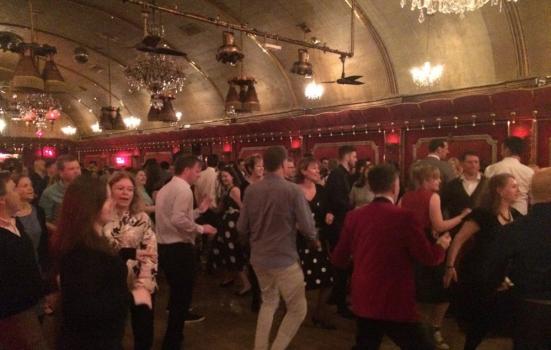 A Jive Party in London

Jive Party at the Rivoli Ballroom in London. A clutch of geriatric teds, depleted quiffs faintly shimmering like ghost ships in the haze of the house lights, step aside for a gaggle of immaculate millennials to take the floor for 'That Mellow Saxophone'. There is pomp, glamour, sweat, tears, and grooves driving the dance floor like a juggernaut.

The social and economic benefits are far-reaching. Beyond the obvious health and educational gains of social dancing, there is intergenerational dialogue, revenue for a community venue, vital employment for artists and a market for the plethora of fascinating micro-enterprises related to this scene (hand-made reproduction clothing, specialist hair stylists, even vintage watch traders). Then there are taxis, local eateries and shops all benefiting from the music and dance lovers who make up the Jive Party.

Any claims about the social, economic or health benefits of the arts, commonly exaggerated in NPO applications, can also be made for grassroots activity

In recent years, there has been renewed interest in the potential of grassroots activity that exists beyond the scope of current cultural policy. This interest appears to be motivated by both practical and ethical concerns. With over a decade of brutal funding cuts foisted upon the cultural sector, our institutions have been forced to seek income elsewhere.

With over 10 million people participating in 60,000 participant-driven, self-governed, amateur arts groups, there is serious potential here. In ethical terms, the risible inequality of our funded arts sector along lines of class, race and geography cannot be sustained. If the social and economic potential of grassroots culture is to be harnessed, the ethical problem must be addressed.

My dual existence as both creative producer for NPOs and weekend rock 'n' roller leads me to ask if grassroots culture can resuscitate the funded sector. As an artist, I appreciate the personal touch in this world. Whether it’s a folk gig in Biddulph, or providing music for an am-dram spectacular in Northwich, I know who I’m dealing with and they look after me. More than once, a voluntary organiser has given up their own bed so that I don’t end up on a sofa.

This attention is extended to the audience. I rarely play to an empty house. Audiences are valued and nurtured. It’s not unusual for organisers to make hundreds of calls, drawing on vast personal networks to make sure a venue is packed. I’m talking about music, but I could just as easily be talking about grassroots theatre, crafts, visual arts or writing.

Any claims about the social, economic or health benefits of the arts, commonly exaggerated in NPO applications, can also be made for grassroots activity. What relegates something to grassroots status is that it is neither commercially viable nor of sufficient artistic quality for it to be worthy of public funding – lacking in invention, professionalism and importance.

Arguably, the very idea of grassroots culture is created by funding itself, structured in such a way that requires funded institutions to define themselves against something: as being more innovative, professional and important than others. The long-standing ethical issue is that a privileged and unrepresentative minority dominates the destinations of public funding, claiming possession of the rarefied knowledge and social capital to ordain what is officially legitimatised as innovative, professional and important and so inescapably instituting a hierarchy of cultural value.

Grassroots culture can be every bit as innovative, professional and important as funded culture. Artistic integrity, invention and talent are just as present here as in the R&D of my day job. Let’s face it, while our cultural institutions deliver vital R&D of jaw-dropping ingenuity, they also deliver turkeys at a rate that would make Bernard Matthews sweat.

Any cultural worker will have at some point found themselves gasping for air beneath a tidal wave of tedious value signalling, delivered by struggling hipsters at some sparsely populated R&D sharing event somewhere, the complimentary tickets flowing as freely as the vainglorious platitudes that populated the funding application.

Too often, commissioned work falls short within a process that condemns our talented artists to march like zombies along the R&D treadmill, forced to produce incomplete material, predictable in claims to innovate, conformist in claims to challenge and disingenuous in claims to engage.

The deficit model of engagement is another pernicious outcome of a skewed hierarchy of cultural value “in which those who are positioned as non-participants are told, implicitly or explicitly, that they should participate more” and relegates everyday cultural activities (and the people who do them) to "second-class cultural status” (1)

This is engagement as post-hoc engineering, carving out a problem necessitated by publicly-funded social inequality. As David Stevenson put it: “If the ‘problem’ was understood as a need to provide equality of access to culture rather than state-funded culture, then those who implement policy would be free to focus less on maximising access to those organisations and activities which, ﻿for other valid reasons, the Government funds, but that the majority of the public are not interested in attending."

At its worst, with bewildering irony, putting engagement into the service of closed notions of artistic quality enables cultural institutions to adopt social issues with such enviable naivety that they can reduce actual disadvantage to the toe-curling value memes of an earnest, wealthy 8%, rather than enable culture to meet its full potential in those places where it might benefit people the most.

Grassroots culture isn’t about engagement – not in this sense. It is the spontaneous, collective creation of culture. Let’s call it ‘socially instigated’ practice. People choose to participate, enthusiasm is shared, passions ignited, social networks are formed and new aesthetics emerge.

I am encouraged by the shift in thinking that seems to be happening, and excited about the possibility of grassroots enablers being themselves enabled to realise the potential of their work. But thinking about how the deficit model of engagement has emerged from the social stratification of funded culture, I am cautious.

Attempts to engage with grassroots cultural work that are motivated by a desire to plug funding gaps, shore up questionable cultural hierarchies, and maintain the status quo are doomed to fail. The real potential of grassroots culture to rescue our funded culture from the crisis of its own making exists in moves that are motivated by a will to resolve the ethical problems of cultural funding and stimulate new forms of cultural democracy. The gains that could be realised by loosening the grip on closed abstractions of artistic quality are significant and urgent.

(1) From Towards cultural democracy: Promoting cultural capabilities for everyone.

Thank you for spotlighting Jive Party as an icon of grassroots culture. I am responsible, together with a good friend, for the Jive Party events and in November this year (2018) we'll be celebrating 25 years of these monthly dances with live music. There are few longer-running events in the Capital. As you an imagine, over that period we've put many, many thousands of pounds into the pockets of musicians while at the same time introduced thousands of newcomers to the pleasure of partner dancing. All without one penny from any arts subsidy. Instead of chasing grants, we just put on an event that we thought people would enjoy. We took a risk with our own money when we were both students and didn't have any money to speak of. But as a result of our two-man marketing drive, people showed up, and they still do, generally in sufficient numbers to cover costs and make us a profit. With the plethora of choice available to anyone on any Saturday night, and so easy to find out about via the Internet, we are finding that people are more fickle and less loyal than they used to be, and it can be galling to see that we are in competition with subsidised events - to some extent, arts grants attack us, they do not help us. There is a place for grants to assist the less obviously commercial venture and to seed new ideas. Certainly a need for funding in arts education. However I personally get a little annoyed when I hear about artists who, because their grant application is turned down, simply give up on their project. Perhaps it could be realised in some other format. Perhaps it needs further development. If you really believe in it, then find a way. Who knows, it may run and run.
Ive played Jive party a few times so thanks for the gig! Loads of fun! Im glad you liked the article and your contribution here is really valuable. As you know, many similar events outside London operate on the investment of enthusiasts who often end up out of pocket, but they continue for the love of the artform. Working in NPO venues, Ive noticed an increasing interest in activities that were previously pushed to the margins. As you have rightly pointed out, this can be damaging to long standing grassroots activities. I think the funded sector could learn a lot from people such as yourselves who have nurtured activities so succesfully and sustainably. Out of interest, have you ever visited Arts professional before? Bringing people from the grassroots world to AP would be a very nice outcome of my article!