It’s not easy to find an audience for contemporary devised theatre in an area with low arts engagement, but Nancy Barrett did it. She tells us how. 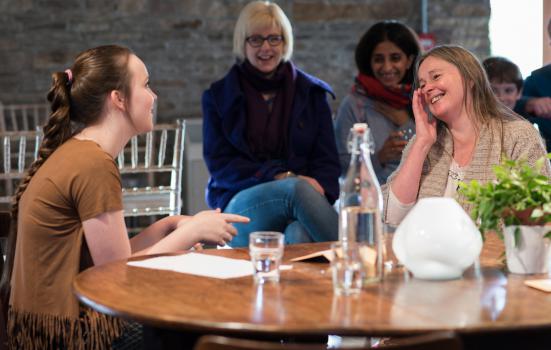 North Kirklees, in the bottom 20% of local authority areas for arts engagement, is a curious place. You won’t find it easily on the map and very few people will tell you they live there. The dozen or so towns and villages of North Kirklees, a rural-urban sprawl sandwiched between the M62 and the M1 in West Yorkshire, share roots in the woollen industry and are fiercely independent and individual in character. You probably won’t have heard of many of the towns or villages, though you may have heard of Dewsbury, for all the wrong reasons.

Since Creative Scene, one of Arts Council England’s Creative People and Places projects began working here in July 2014, we have been asking questions about how we might make art a part of everyday life in this area. We are exploring new models and partnerships for production, promotion and community involvement and trying to find ways to build a vibrant and self-sustaining arts scene in the age of austerity. So we’re experimenting with different approaches to create, produce and market work in this hugely diverse area.

‘Great art for everyone’ is not a simple case of people telling us what they want but a dynamic process of co-creation between people, places and professional artists

One such project took place in November last year, when a group of 12 mothers and daughters came together over a three-week period with theatre company Complicité to devise, rehearse and then perform Like Mother, Like Daughter. The team set out to recruit pairs of mothers and daughters who would be up for sharing their tales of the ups and downs of their relationships, first with each other and then with a group of other mothers and daughters, and finally with an audience. We made a very wide call-out and a group of women came forward to take part from all walks of life and from different faiths, religions and cultures. None were known to each other before the project, and the creation process started with a meal where each of the pairs brought food to share, moving on to bread-baking together, all the time being coaxed and coached to tell their stories by the director Jane Nash. One mother said: “This project is affording me rich opportunities of conversation with my daughter – real ones, open, honest, authentic. Also the opportunity to hear other women's stories, literally from around the globe.”

Developing the audience for this unique show was no easy task. As well as creating and performing the show, the performers were key to building audiences from their own families and communities. It’s a tactic common in amateur and community theatre performances and in this way we aimed to bring people who had never set foot in a theatre to see the show.

We’d also been lucky enough to bring on board Bradford-based online women’s clothing retailers Bonprix as partners, who gave us access to its database to seek both participants and audiences. It also offered free clothing to participants and discounts to ticket buyers. This was a fascinating collaboration and there’s lots more to explore to see how we might work with companies that share the same consumer and audience demographic.

With no regular theatre venues in our patch, the show was staged over six days and nights in two different venues. Batley Town Hall is a council-run venue that hosts a variety of local productions and events. Its ornate civic interior was transformed into an intimate parlour where mothers and daughters took their place around a dining table to quiz each other, with the audience listening in from the sidelines. There were no props, just simple and beautiful lighting and a sense of being party to private conversations. Audience development activities included posters in local shops, tweets to local amateur dramatic and community organisations, and word of mouth through our highly active group of Scene Makers (advocates who work with us on every aspect of productions from inception of ideas to selection of artists and production and marketing shows).

Our other venue, Northorpe Hall, was very different. A striking sixteenth-century barn run by a charity supporting children’s mental and emotional health, it’s usually hired out for conferences and weddings. We’ve been working in partnership with it over the last year to bring children’s touring theatre to the space, and like our other venue promoters (pub landlords, sports and social clubs and community centre managers), it worked with us to ensure flyers about the show got out to local audiences and previous venue users.

A combination of online ticketing approaches, including the Kirklees online ticketing site, direct sales to participants and their contacts, and walk-ups at each venue, meant that we started the run with very little idea of audience numbers in advance.

So who came? We had found it tricky to market the show. The devised nature of the show, community participation but on a small scale, and the mothers and daughter theme made it sound more folksy than the vibrant and contemporary piece of theatre that was performed. People came, though they reported that they were not at all sure what they were going to see. One young audience member said: “My mum texted me about the show last night and I was not sure what I was coming to. I wish I had been involved. I thought the show was fascinating, funny and emotive. The real amazing thing is the bond-building that must have been built between mothers and their daughters.” And another said: “I wasn’t sure what I was coming to today. A poster took my attention and I came along. It was brilliant, some really genuine and open conversations between the mothers and daughters.”

The story was picked up by the Yorkshire Post, Radio Leeds and the Huddersfield Examiner, but most of those who came did so as a result of word of mouth from participants or through social media. Here are some statistics:

We might have benefited from the international reputation and name of Complicité to build audiences, but few of our target, local audiences would have picked up on that. We did get an ‘arts crowd’ from the neighbouring big cities and arts companies who were drawn by the name. We even got a group of five young men in their twenties who came because a girlfriend, who was French, knew about the company and told them to go.

In the end we decided we might have referenced Loose Women or Big Brother to help describe the experience. The sense of something shared between people, unfolding live before you, that could go anywhere at any time, was what captured the audience’s imagination, as well as the universal truth and staggering honesty of the performers, as they told their stories unscripted.

There’s lots more to unpick here about the creation, audience development and marketing approaches that can truly engage people, as co-producers and co-commissioners, and as audiences and advocates. For us ‘Great art for everyone’ is not a simple case of people telling us what they want but a dynamic process of co-creation between people, places and professional artists. The quality of what was produced and shown over three weeks is testament to the richness of the people and the place, the cultural seam that we are mining, and to the skills and creativity of the professional artists and producers who brought the whole project to life. We feel that we are at the start of a process that we hope will open up some unusual long-term collaborations, and through this start to find new ways of presenting, producing and promoting arts in the places where people live, work and play.

We are continuing to develop our network of non-arts venues in North Kirklees with the people who run them to decide on what’s best to present, when to present it and how to market it. There’s plenty of arts and culture and creativity in North Kirklees. We just need to know, grow and show it.