While touring three productions around the UK, Unlimited Theatre developed a model for working with venues to engage local audiences. Tessa Gordziejko explains the role of the local engagement practitioner. 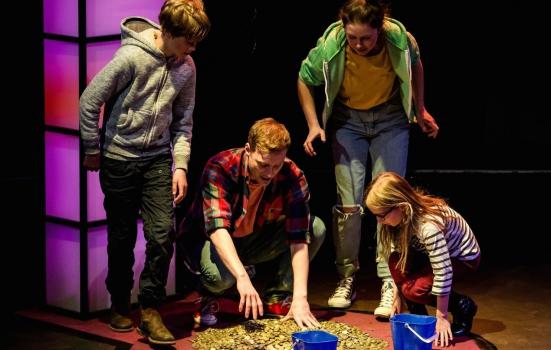 Play Dough, an interactive show about the value of money for young people and their families

‘Engaging audiences’ is a phrase liberally used in the audience development plans of touring companies and venues. But what does it look like in practice, who is best placed to do it and how do we know when we’ve done it well?

We found that we needed to start engagement activity at least two months before the show, so ahead of most press and marketing activity

At Unlimited Theatre we have published an evaluation report and a producers’ toolkit highlighting the findings of a strategic touring project called ‘Together’ that toured three of our productions to five venues between 2015 and 2017. The project afforded us time and resources to tackle the big questions on engaging audiences beyond regular theatre attenders with rigour, creativity and context, and gave us an insight into how we could use it for other touring productions.

At the centre of good audience engagement is dedicated resources, good planning and effective dialogue between the venue and the touring company. With 20 years’ experience touring on the small and mid-scale circuit, we were aware that approaches to marketing and education vary greatly from venue to venue – audience engagement sometimes sitting in one department (marketing or education/outreach), sometimes both, and occasionally falling down the cracks between the two.

This project enabled us to try different approaches, and unsurprisingly, the main lesson learnt was the importance of clarity, right at the point of booking a tour, on how responsibility for audience engagement would be shared and divided between us as a touring company and the venue.

One of the most successful elements of the project was recruiting a local engagement practitioner (LEP) for each venue. These were central in helping us and the venues to develop audiences in ways that went beyond what either we or the venues had previously done. Contracting a person whose remit was audience engagement – rather than relying solely on busy marketing teams or volunteers – meant that it was properly resourced and in continuous sharp focus for the production team and venue.

The LEPs didn't have to be artists. We worked with people from a range of backgrounds including local community leaders and social workers. They had varying levels of specialist knowledge about the arts, but most importantly, they were all well-connected to the local audiences we were hoping to reach.

The venue was our first point of call for local people who might be able to work with us in this role, and some immediately had suggestions for individuals who had a relationship with the marketing or educational team, or directly with the producer. Those who didn’t have contacts based on previous practice signposted us to other local organisations, or we used our own networks in the area to put out a call.

Where LEPs had a pre-existing relationship with the venue, they were able to hit the ground running, knowing who to contact to ask for space and other support. It seems obvious, but venues that had invested in audience development previously and had their own relationship with local communities and groups were best placed to build on this with us as a touring company coming in with a new offer.

Starting in good time was crucial. We found that we needed to start engagement activity at least two months before the show, so ahead of most press and marketing activity. Creating the time and space to make the LEPs experts on the show – seeing the production, learning how it was made and getting to know the creative team – was important in equipping them for the work we needed them to do on the ground. They became part of the team. We listened to their input and suggestions, responded to their feedback, and figured out together how we would talk about the show.

Our other big takeaway from the project was finding a common point of interest and building engagement with groups around that. If we started with people who were too far removed from the work, we failed. We had to be realistic about the learning journey audiences were on, given that we were only performing in venues for one or two nights, with an eight to ten week lead-in. We thought creatively about the elements of the production that the groups we hoped to engage might connect with. That could be anything from the politics, to the music or props, to the feel of the show (more like a gig or cabaret).

The most effective technique for engaging people was conversation. Talking to a person or a group about the show in their own environment sparked an interest that would lead to attendance at the show itself.

There is a lot that touring companies can potentially offer venues to engage new audiences and enrich their experiences of the show. But it can only work if the venue itself is already striving to diversify and entice new audiences across its whole programme. This means investing time in building and maintaining relationships with community leaders, advocates and artists.

Some venues are already good at that, and so both touring company and venues need to approach audience engagement with an openness and generosity to the other. Touring companies need to enable access to the performance and content surrounding the show and its artists for both the venue and the LEPs they are working with. In exchange, the venues need to have a real and energetic dialogue about their audiences, their contacts within the community, and what they can build on from previous programmes of work.

To read the evaluation and toolkit please click here.