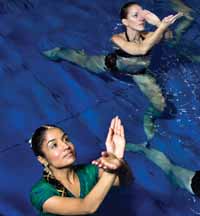 Historically, Cultural Olympiads have set out with grand ambitions and budgets which are eroded in the years between winning the bid and delivering the Games – Sydney went from A$51m to 21m, Atlanta $40m to 25m. London’s ‘Singapore promise’ for 2012 was of a genuine ‘marriage of sport and culture’ as per Baron de Coubertin’s vision – but with no central budget. So when I arrived in 2007 as part of a UK network of Creative Programmers for London 2012, we faced the challenge of persuading regional partners to spend their own money delivering projects which collectively would form the UK Cultural Olympiad.

You know that old joke about Yorkshire people – deep pockets, short arms? Had this continued to be my task I doubt I would still be here. However, within six months of starting an opportunity arose to bid for Legacy Trust UK funds for a regional programme which spanned the three Olympic values – sport, culture, education, with the emphasis on culture. About 150 conversations later, with artists, arts organisations and agencies, a theme emerged which would define Yorkshire’s programme – human movement. We bid, we won.

Almost. Our original bid was rejected. It specified the content and delivery partners for the programme, and the Legacy Trust wanted us to keep the selection of projects open, to reach beyond the ‘usual suspects’. Disappointing at the time, in retrospect this was a critical factor in the success of the programme now being delivered. With a stronger plan, we got an award of £2.24m for Imove, a three-year Cultural Olympiad programme for Yorkshire.

From the outset there were very clear parameters. Firstly, this was a curated programme, not a funding scheme. We wanted to bring in artist-led projects from across the region in response to the theme of human movement; we needed to reach new audiences and participants; and the programme should say something about Yorkshire, its landscapes and communities.

For the next 18-month phase of commissioning, I recruited three Associate Producers alongside me. Projects were put forward through a ‘pitch’ process and the most promising went into a period of research and development. The best of these were commissioned once our recommendations had been approved by our specialist Programme Board. The producers oversaw the further development and delivery of each project, ranging from offering a guiding ‘hand on the tiller’, to providing organisational and production support, introducing collaborations and audience focus, where it was needed.

The benefits of this have been manifold. The quality of creative ideas and Imove ‘fit’ has resulted in innovation and excellence. We have been able to support artists at different stages of their careers, helping experienced artists to realise Olympic-sized ambitions: dance artist Balbir Singh is creating a fusion of Kathak Dance and synchronised swimming, culminating in a performance in the international pool at Ponds Forge in Sheffield in June 2012; Madani Younis and Freedom Studios in 2011 created ‘The Mill’, a site-specific production in a disused Bradford mill; and Alan Dix and Shanaz Gulzar are celebrating our spluttering love affair with the internal combustion engine in ‘My Last Car’, performance and installation at locations in rural North Yorkshire this summer.

We have also encouraged emerging artists, and those without an organisational infrastructure, to stretch themselves: Scunthorpe Co-operative Junior Choir and Proper Job are producing ‘Cycle Song’, a massive community opera in Scunthorpe about local cycling hero Lal White; and dance artist Harry Theaker is making ‘The Traipse’, a contemporary redefinition of Englishness through the rapper folk traditions, from Grimsby to Leeds.

Imove has given us the opportunity to work with high profile artists in different ways: Simon Armitage’s ‘Stanza Stones’, a poetry trail carved in stone across the Pennines whilst also working with young writers ; Ian McMillan is librettist for ‘Cycle Song’; Akram Khan returned to his alma mater, the Northern School of Contemporary Dance, to restage ‘Vertical Road’ with the graduate company, Verve, touring spring 2012.

Imove’s own marketing has provided a brand identity which gives projects profile, supports those with limited capacity and reaches new audiences. Overall programme management has aggregated, and hence reduced, reporting requirements to funders and contact with the byzantine mechanisms of London 2012, taking the load off individuals or organisations with limited administration capacity.

Imove carries a central ‘Big Idea’ and ethos with potential to connect more widely than would be possible with a single arts project. It may also provide a future model for producer-curated programmes: neither festivals nor institutions, something more radical and flexible. I believe that the 2012 opportunity that Yorkshire has grasped will have lasting benefits through the legacy of both individual projects and the way we have worked with them. We may not know its extent for a few years yet.