From words into action

The Warwick Commission report may have sparked a useful debate, but how can its recommendations be acted upon locally, asks Chris Bilton. 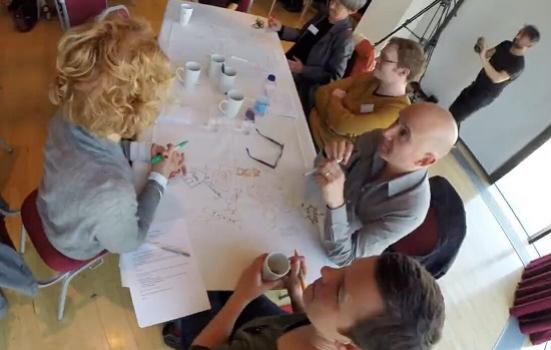 Artists and academics have been coming together in the West Midlands under the auspices of the Warwick Creative Exchange (WCE), a network of University of Warwick academics and regional cultural organisations and practitioners, to consider precisely how the findings of the Warwick Commission report can be acted upon around the country. Our discussions have focused on how the arts and academic communities can work together to create cultural value through knowledge exchange, collaborative research projects and networking.

One of the challenges will be connecting the region’s larger flagship cultural organisations with the fleet of smaller, often project-based and irregularly funded groups

In April, 80 academics and arts practitioners met at Warwick Arts Centre to explore how they could work together to build a more diverse, participatory and equitable cultural sector, starting at the regional level. The event Locating Cultural Value, organised by WCE, was designed to consider the legacy of the Warwick Commission on Cultural Value, which was an ambitious attempt to spark a national conversation on the value of culture. It arose out of earlier conversations and events organised by WCE around themes of interest and concern among cultural practitioners and academics in the West Midlands. The commission drew together new and existing research in order to frame a series of five policy goals for the cultural sector:

While many of these recommendations are directed towards politicians and policy-makers, it is recognised that the arts sector will also need to play its part if goals are to become actions. Similar discussions have taken place in several other cities, including Nottingham and Portsmouth.

How could the West Midlands build on the report? First of all, there was strong support at the conference for a joined-up approach to cultural provision and cultural policy. One of the challenges will be to connect the region’s larger flagship cultural organisations with the fleet of smaller, often project-based and irregularly funded groups. Another will be to bridge the divide between the north and south of the region, and to connect the region’s cities with their rural hinterlands. Finally, for many cultural organisations facing future austerity cuts, especially at local level, there is a pressing need to build partnerships with other sectors including health and education.

One route towards a more collaborative, connected cultural sector might be co-creation: large and small arts organisations collaborating with community groups and universities to initiate joint projects, and inviting communities and users to co-commission joint projects. WCE is planning a workshop on co-creation in the coming months. Within universities there are similar debates about the co-creation of knowledge through teaching and research, with academics seeking to place the user of the research and the student in a more central role.

For cultural organisations co-creation might also address the lack of diversity in the arts, especially a lack of diversity in the cultural workforce. Co-creation can open up cultural production to groups and individuals outside the usual suspects. For example, Warwick Arts Centre is currently developing a series of small ‘micro-commissions’ on and off site. According to its Head of Programme & Audiences, Matt Burman, one of the challenges here will be to involve community groups as partners and co-creators in this process rather than as passive recipients.

A second priority for action was education. There was much enthusiasm for the commission’s emphasis on creative learning, STEAM (placing the arts on an equal footing with the STEM subjects of science, technology and mathematics), and the social as well as economic value of opening up arts activities to the young. Achieving these goals will depend to a great extent on future government policy, especially towards education. But cultural organisations and academic researchers can continue to provide evidence of what works and why. One participant recommended the reissuing of Ken Robinson’s report on creativity in schools All our Futures. Others spoke warmly of their own work with young people in schools and in communities across the region.

Higher education is confronting many of the same difficulties as arts organisations: a growing disparity between elite education and education for all, lack of diversity and a lack of engagement with or relevance to the wider world. It seems clear that cultural organisations and universities can learn from and help each other as they face up to very similar challenges. Just as the Department of Education is being encouraged to provide space for the arts in the national curriculum, there is a growing expectation that universities should engage with communities outside the academy. Several participants called for universities to play a more visible role as regional hubs for cultural and creative activity, and to find ways of integrating creative work into university teaching and research.

Universities, including Bristol, Warwick, Kings College London and Leeds have found that alliances with cultural organisations can lead to new approaches to research as well as innovative artistic projects. Some of this interaction has been seeded by collaborative research funds made available by NESTA and Arts Council England, as well as the research councils’ emphasis on impact and engagement.

The Warwick Commission on Cultural Value – arts-led, academically informed, publicly engaged – was one such collaboration. Bringing its findings back to the region has opened up a series of challenges for all of us – researchers, artists and citizens – including building solidarity and connectivity across the cultural and creative eco-system, breaking down barriers to access and diversity in the arts and in education, and finding a more equitable spread of provision of both artistic and educational opportunities. Finding solutions to these challenges was never going to be easy, but by working together to build collaborative projects we can begin building a more open, democratic and diverse culture, both in our arts venues and on our campuses.

Chris Bilton is Reader in the Centre for Cultural Policy Studies at University of Warwick and a member of the steering group for Warwick Creative Exchange.
www.warwick.ac.uk/warwickcreativeexchange

From words into action

Silos must end for the arts to thrive, report concludes
Mind the cracks
Cultural DNA and ecosystems of success