Cultural DNA and ecosystems of success

Jonothan Neelands warns that although creativity and cultural vibrancy are part of our shared DNA, the flourishing Creative Industries will wither unless attention is paid to their delicate root system which relies on public subsidy to survive. 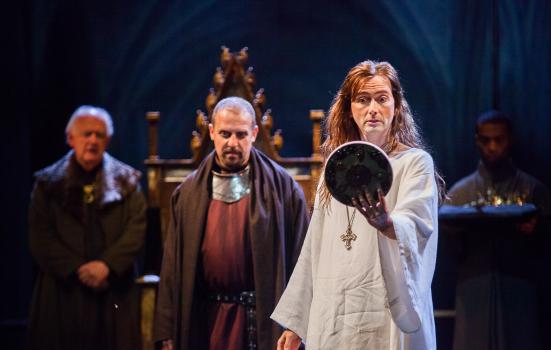 David Tennant’s early passion for acting was fed by an English teacher at Paisley Grammar School who had the time and imagination necessary to grow his talent.
Photo:

As we know, the Creative Industries make a significant contribution to the UK economy and are the fastest growing industry in the UK. They are defined by government as: “those industries which have their origin in individual creativity, skill and talent and which have a potential for wealth and job creation through the generation and exploitation of intellectual property”. Within this broad definition there are sectors like film and TV, digital games and fashion, which are extraordinarily successful both in economic terms and as examples of the creativity and entrepreneurship which characterise the UK’s cultural and creative tradition and identity. Within the Creative Industries, the performing and visual arts make a significant contribution both to the creative economy and to the UK’s reputation as a world leader in standards of cultural production.

However, there are also economically vulnerable sub sectors of the performing and visual arts in particular which have traditionally relied on public subsidy to survive and flourish. In a time of austerity and diminishing support for these sectors from the public purse, it is important to stress the interdependence of the economically successful sectors of the Creative Industries and the subsidised arts sectors, and to raise awareness of the extent to which the success of the Creative Industries is dependent on the education, training, resources and career opportunities that are supported by public funding.

There is a flow of talent and experience between the subsidised and popular sectors, which is vital to both.

The Warwick Commission on the Future of Cultural Value uses two biological metaphors to try to make the connections between different sectors of the Creative Industries more visible and also to connect our economic and cultural successes to the shared cultural identity and foundations that continue to produce world class creative and cultural talent. Our argument is that the creativity and cultural vibrancy within our shared UK identity also nurtures brilliance in design, engineering and enterprise more generally.

The first metaphor is DNA – the extent to which we as a people are hard wired by our shared culture and values to be critical, curious, creative, tolerant and inventive. How our culture is essential to our national DNA as a people. Danny Boyle caught this idea perfectly in the opening ceremony of the 2012 London Olympics, most memorably in the section which layered Mike Oldfield’s iconic Tubular Bells soundtrack with the NHS, contemporary dance, J.M. Barrie and Peter Pan, J.K Rowling and Harry Potter, and other great works of British literature. The people who produced these world class and popular artists and art forms also produced, and are proud of, cultural institutions like the NHS and the BBC. And as other sections of the ceremony demonstrated, our cultural identity is made up of the ideas and traditions that have come to us from across the world and which, because of our curiosity and openness, have become part of who we are as a richly diverse and multicultural society.

The cultural DNA metaphor is important from the Commission’s perspective: it is because of this DNA that we have created both economic and cultural success in the world. Viewed from the outside we are often seen as being creative, innovative, confident, entrepreneurial and as world leaders in the arts. In our view, our capacity for economic success is woven within our artistic and cultural identity. To neglect the arts and culture, particularly in schools, which are our common foundation, would in time damage our unique economic vitality and our ‘standing’ in the world.  The arts in a multicultural society are also an important means for celebrating difference and diversity, the hallmarks of our society.

Danny Boyle’s professional life began with Joint Stock, a publically subsidised theatre company, which brings us to the second metaphor of culture as an ecosystem made up of connected filaments and interdependent energies and flows of talent and expertise. Looking at the career of another National Treasure helps us to see how dependent the popular and commercially successful blossoms of the ecosystem are on roots that need careful attention and protection.

David Tennant is a living example of the vitality and diversity of the arts and other forms of culture, and how fluid and interconnected are the popular and subsidised sectors of culture. Within a month at the end of 2013, he was seen playing Richard II by children in schools across England in the RSC streamed event, and in a Dr. Who special at Christmas. Add to this his recent work in Broadchurch, Harry Potter and commercials for Boots and Virgin Media. Tennant works across the ecosystem and his example makes visible the interconnectedness of a wide range of cultural activities, some of which are hugely popular and some of which continue to be of limited appeal.

This delicate ecosystem combines commercially successful work with work which at the moment requires public subsidy and support to thrive. The whole ecosystem requires its most economically vulnerable roots to be diverse, healthy and excellent in order to feed and support the economically successful branches. There is a flow of talent and experience between the subsidised and popular sectors, which is vital to both.

David Tennant’s early passion for acting was fed by an English teacher at Paisley Grammar School who had the time and imagination necessary to grow his talent. He attended Saturday drama sessions at the Royal Scottish Academy of Music and Drama and eventually trained there. His first professional work was with the radical and then publically subsidised 7:84 theatre company.  He represents the importance of the connections within the ecosystem of cultural and creative experiences at school and those offered by local cultural centres in developing the potential to become a great artist and entertainer.

But these experiences are also essential in all of our lives, particularly for the most disadvantaged and vulnerable communities who need enhanced access to the life of our society both as producers and audiences of culture. Tennant’s career is in a great British tradition of providing public support for our most talented artists. If the good people of Stratford-upon-Avon had not provided the son of a glove maker with a scholarship to the Grammar School that would give William Shakespeare the knowledge and the tools necessary to his trade, the world might never have heard of him.

Making the cultural ecosystem more visible in society, reminding ourselves that our artistic and cultural flourishing is part of our shared DNA as a people and, like good ecologists warning that the popular and successful will wither unless attention is paid to the root system, is the Commission’s purpose.

In the first provocation of the Warwick Commission Robert Peston made the point that public spending on the arts represents 0.001% of all public spending. Yet the Creative Industries ecosystem yields 9.7% of GVA, which is more than the banks do1. A YouGov poll last year showed that 33% of us see no good reason for public spending on the arts at all. Yet 78% of us engage with the arts at least once a year2. And in terms of diversity, belonging and finding a passion for the arts, 70% of children of parents with no educational qualification spend less that three hours a week on cultural activities as opposed to 80% of children whose parents have degrees3. The arts and culture make us who we are. In these difficult times we will need to develop new models of funding and support for the economically vulnerable roots and to ensure diversity and quality of engagement for us all. Most importantly we need to see how the ecosystem works for us all, whatever our backgrounds, tastes and preferences. We can’t afford not to afford the seed funding needed to ensure our future economic and cultural success.