The Jess de Wahls controversy has highlighted how tenuous arts organisations' solidarity with transgender people can be. 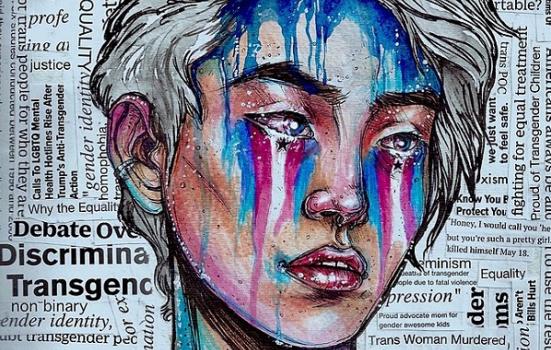 As has become customary during June, arts organisations are splashing on the rainbows for pride month - the Royal Academy of Arts included.

The online flag waving should raise some eyebrows after the institution reversed a decision to remove items by artist Jess de Wahls from its shop over her "transphobic views".

But while right-wing commentators loudly decried the "cancel culture" tactic, much of the left-leaning arts sector has been remarkably quiet so far on this case study in two of its favourite topics: freedom of expression and diversity and inclusion.

The academy is right to have apologised. As de Wahls told its staff before the initial de-platforming, the eight complaints made against her could have easily been countered with eight - or 800 - more supporting her belief that biological sex is an immutable fact.

Actually, it's not that simple. Take as an example the world of sport and athletes like Caster Semenya, who is banned from several world athletics events over her higher-than-average testosterone levels, or Laurel Hubbard, who will become the first openly trans competitor at the Olympics next month, having satisfied officials' criteria.

Even then, people do not need to prove their sex. To live as the man, woman or non-binary person you are is enough.

It's natural to find this confusing at first. Ask anyone who has come to terms with living outside the gender binary and they will tell you it was confusing for them too.

Understanding of these distinctions is not yet widespread and despite the sector's efforts, many arts organisations still lack the confidence to fully engage with terminology and communities that are new to them. The fear of making a public relations error when inclusion is the watchword is palpable.

It was this - not a genuine solidarity with transgender people - that drove each stage of the Royal Academy's response.

It now says it had no right to judge de Wahls' views on social media: "This betrayed our most important core value - the protection of free speech."

Censorship is not the answer. Jess de Wahls' opinions on trans people, while flawed, are not a reason to take her art off the walls or gift shop shelves.

What they should prompt instead is a greater awareness of the challenges transgender people face to their very existence, and efforts to commission and programme trans artists year-round.

A is for absurd
Climate change needs more than lip service
Optimism with a side of caution
When best intentions backfire?
Masking for a friend
Choosing care over censorship
Time's up for conservatoire culture
‘Socially closed’ arts sector may be contributing to UK’s divisions
Crisis or opportunity?
“We surprised ourselves”: Exit Interview with Judith Knight