Making the most of membership

How did Sadler’s Wells manage to increase its membership and ticket sales while cutting discounts and other incentives? Sebastian Cheswright Cater shares the secrets of their success. 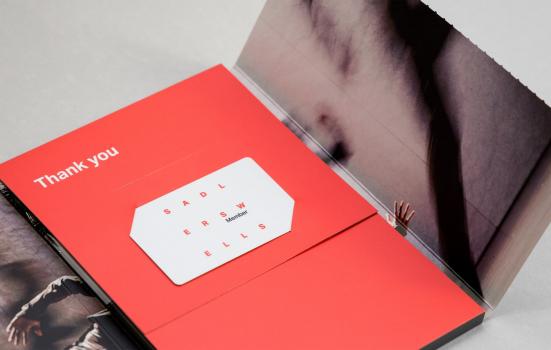 The annual income of Sadler’s Wells is made up of 10% public funding through Arts Council England and 75% from ticket sales. While audience development is key to our success, financial stability is equally important, and our membership scheme has to balance the needs of our audience with our function as a charity.

The old ‘Friends’ membership scheme was put in place 15 years ago, when our new artistic programming policy was establishing itself, and audience development and sales generation were key to our financial survival. Two main initiatives facilitated this:

These discount schemes helped us widen our audience base, but as audience loyalty increased the income drift grew proportionally, which ultimately affected our overall yield. In 2015/16 we lost £102k of income due to the 2-for-1 Friends voucher, so for a scheme that was intended to support us and our charitable aims, it was in fact doing the opposite.

Our overall membership numbers had plateaued over the last few years, and we had intentionally not promoted the scheme as our income loss to discounts was significant. In the last couple of years we had undertaken some Christmas gift membership drives, and due to their success we knew there was still an interest in a membership scheme.

With many Friends having been members for several years, we had to ensure that any changes didn’t alienate these loyal customers, while also appealing to a much wider group of potential members.

Following a brand refresh and the implementation of a new CRM system (Tessitura) in 2014, we were able to make significant changes in the way our membership scheme operated. This had the potential to deliver increased membership numbers, and in turn, increase income. Most notable of these changes was the ability through the new CRM to offer priority booking as a benefit for the first time.

We felt that the only way for the new scheme to succeed was if customers saw the different levels of membership as part of a cohesive package – and this was only possible through an integrated, collaborative approach. Consequently, our development and marketing departments formed a working group to drive the process in collaboration with the ticket office and CRM teams.

Our overall objectives were to:

We carried out some research with Silver Sea Consulting to fully understand the potential gains and losses of changing the scheme. We realised that the 2-for-1 voucher was the single most inefficient aspect of our old scheme. This corresponded to 51% of the income that was received from Friends membership fees, so we knew that if we removed the vouchers, we would need to lose half our members to see a net decrease in income.

Clearly, if we positioned our membership offer at the right level, there was huge potential to not only increase our membership base, but also our income.

We also undertook qualitative research, sending out online surveys and running focus groups with frequent attenders and existing Friends and Rehearsal Members. Priority booking was highlighted as a key potential benefit, and many frequent attenders said there was no need for them to become members while the ‘free’ Multibuy scheme was in place.

The research with our core supporters showed us that they were ready for change too. Based on this, we finalised the following benefits of the new scheme:

We also decided to change the Multibuy from 20% to 10% discount, and make it ‘opt-in’ with a promo code (instead of being compulsory for everyone buying two or more tickets).

As Sadler’s Wells has played an increasingly important role in supporting the development of dance and dance-makers, we needed our audience to understand that the new membership scheme had a philanthropic mission at its core, as opposed to the old scheme which was purely transactional and benefit-driven.

The visual presentation of the old Friends scheme was rudimentary, with new joiners just receiving an A4 letter with an embedded laminated membership card. We commissioned our brand designers Red&White to come up with a design solution to increase engagement and perceived value.

Two new welcome packs were created, each with its own colour scheme – one for Members and Rehearsal Members (red and green) and the other for higher-level Patrons (black and gold). They both contained a membership card, a brochure highlighting what their support enabled us to do, and a season brochure incorporating for the first time editorial about our charitable work.

With the introduction of priority booking as the headline benefit, we re-evaluated our on-sale processes. Traditionally, we had given our Friends priority information, which entailed sending them the season brochure two to three days in advance of the season on-sale. With our new system in place, we changed our internal processes and factored in an additional two to three weeks’ notice, which gave customers more time to plan their ticket purchases.

This extended period also gave us enough time to undertake a membership recruitment marketing campaign, consisting of digital and social media content advertising. We also listed our new season productions on our website the day the new season was announced. Every show page prominently featured information about the priority booking dates and encouraged people to join the membership scheme to be the first to book.

Our launch timeline culminated in our May season on-sale, which meant working to a tight timetable. All elements of the new membership scheme had to be ready by December 2016, so that existing members could be notified of the changes in January. We aimed to soft launch in February and March to test the CRM functionality, before a full launch with our season on-sale in May.

Through careful project management and the support of a fully committed team we hit all our deadlines. The CRM technology was ready by the end of 2016, and our ticket office staff had been trained in communicating the changes in membership schemes from the start of this year. The letters that went out to existing Friends laid out the changes, and reinforced the charitable function of the scheme. As a result of our clear communication explaining our reasons for making the changes, we received fewer than ten complaints.

Due to our careful planning and project management, the membership became a runaway success. All the figures below compare February to June 2017 with the same period the previous year:

The response to the new membership exceeded our expectations. By changing our old Multibuy from a 20% to a 10% discount, we not only encouraged more people to join the membership scheme, but also reduced our drift and increased the yield on ticket income.

By increasing the profile of charitable support messaging in our membership communications, our customers better understood the role we play in supporting the development of dance and dance-makers, and were more receptive to supporting us through donations at the point of sale. Members’ donations increased by 160%.

The combination of fewer discounts and an increase in tickets purchased resulted in a reduction in drift, an increase in yield, and a strong return on investment (ROI):

By consulting with our customers and by taking an integrated inter-departmental approach, we have created a scheme that works for our audiences and delivers financial results for us. We are pleased that we have created a membership scheme that is popular with audiences, and has changed the way in which our audiences perceive the organisation, primarily in relation to our charitable work.

As a result of the initial success of the scheme, we are already planning larger membership recruitment campaigns around our season on-sales, and have already committed to increasing our financial targets for next year, including a doubling of our membership fee target.