As new technologies open up the possibilities for creativity in stage performance, a new children’s theatre production showcases the potential of augmented reality. Sasha Kreindlin tells the story. 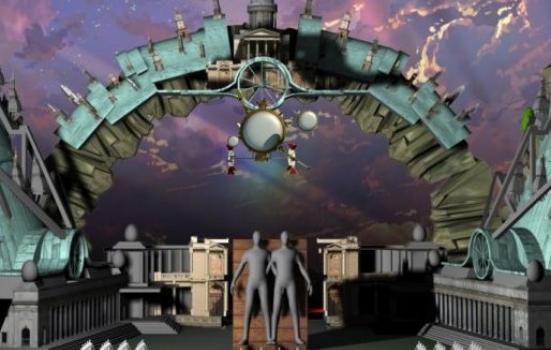 Augmented Reality (AR) is a concept that has surfaced over recent years in games on smartphones and PCs, and as its popularity has risen, global technology companies have developed real-live products in various interfaces.

At ARShow we have linked the world of classical theatre, the world’s oldest viewing experience, with the most advanced field in today’s contemporary technology – AR. The connection enables an exclusive viewing experience and for the first time allows a large number of people to take part, transforming it into a multi-participant entertainment form.

Unlike virtual reality, augmented reality incorporates the animation into our reality. A familiar example is the Pokemon game where the players looked for fictional Pokemon characters that were based in our reality, stood in the middle of the street, in the work space, and so on.

Traditional theatre audiences are usually over or under a certain age and most youngsters attend only familiar tales or stories that are easy to relate to. This technology has the potential to bring the younger generation to shows that match up to other forms of entertainment that they engage with on their PC or phone.

Software engineers, illustrators and stage performers have joined forces to create augmented reality technology for theatre productions and are currently collaborating with the Gesher Theater in Tel Aviv, Israel, in the children’s play Gulliver.

The play combines a multi-participant experience of AR technology with live actors on stage. During 30 minutes of the performance viewers enjoy the experience of augmented reality, with elements that are inseparable from the play. The audience puts on a headset and enjoys an interactive experience, playing an active part by simple actions like pressing a button. They watch the story come to life on stage in a form that cannot be displayed with merely video clips or even a special setting, creating a connection between technology, the audience and theatre.

The work process combines artistic elements from the theatre world, as well as technological elements. The show Gulliver was generated and processed exclusively for AR technology. The positions of the actors on the stage were carefully chosen and adapted to the interaction they experience with the cartoon characters who appear in the play. Timing becomes more significant than ever and was challenging for everyone. The writing process was done in cooperation with software engineers, each providing relevant expertise.

Theatres require new languages and relevant tools to connect with today’s rapidly progressing world. They are eager to be a point of attraction for new audiences, and our decision to use the technology in a children’s play was not coincidental. Children and young people are familiar with the technology and are exposed to frequent changes, so they are ready and able to accept it in the theatre. It is both their connection and their parents’ positive reactions that could take this form of theatre forward.