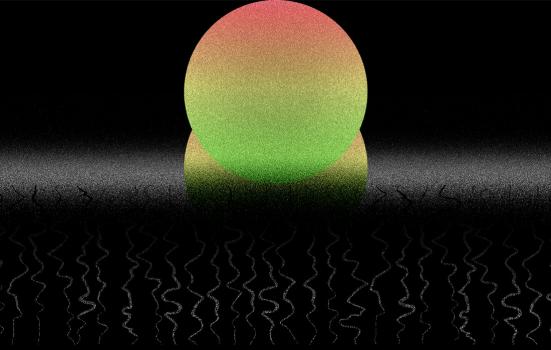 Screenshot image from the artwork - a representation of soil moisture, temperature and light data from GROW sensors.
Photo:

In the GROW Observatory (GROW), we are mobilising thousands of people across Europe to collect and make use of data to regenerate soils and improve the accuracy of information on climate events such as floods, droughts and wildfires. GROW is a ‘citizens' observatory’, a community platform to address urgent environmental challenges through data contributed by the public and the creation of new services. It’s one of four citizens’ observatories funded by the EC, and is the first attempt to deliver one at a continental scale.

Innovation insight and artistic interest is often in the joins and gaps, the points where not everything runs smoothly

Unusually for a science project of this scale, several of us running it are artists and arts professionals. We are passionate about the ways in which artists can drive innovation and so have introduced artist commissions and a residency to illuminate and reframe the idea of a citizens' observatory.

Artists have created astonishing ways to experience GROW data and imaginative interfaces to the continental-scale sensor network. Through projects like this one, we see how art can inspire people with the potential of global information systems that are otherwise distant, dense and impenetrable. It encourages us to reflect on new ways of seeing the world through data and sensing technologies, and can enrich and widen the conversation around a sustainable future for planet Earth.

By the Code of Soil is a data-driven artwork developed by artist Kasia Molga and sound artist Robin Rimbaud in collaboration with the GROW Observatory. During an artist residency, Kasia and Robin worked over several months with scientists investigating satellites and soils, small-scale food producers and permaculture advocates.

They developed code and algorithms that translated dynamic data from soil sensors, combined with static data on soil texture and season, into different graphical shapes and electronic sounds, creating a new ‘language’ of tangible forms.

The artwork includes an application for personal computers which creates an audio-visual artistic interpretation of soil data from the cluster of GROW sensors in closest proximity to the participant. The artwork is displayed on computers each time the orbiting European Space Agency’s Sentinel-1A satellite passes overhead, which is about once every six days. Soil's dynamic nature is reflected by the piece, the sound and visuals transforming to reflect the way that order appears out of apparent chaos in nature.

Kasia stresses how difficult they found it to "express through cold digital pixels something so amazingly complex and organic and alive with millions of living organisms as soil". To create the visual content for the work, she took as her starting point a pixel – representing a single entity like a grain of soil – from which the whole image is built, using a matrix. It starts in visual 'white noise', with imagery coming to life. Various visual configurations – frequencies, shapes, speed of motion and sizes – reflect the moisture, light, temperature and texture of soil from GROW sensors closest to the participant’s computer, based on the IP address.

Audio files are written in such a way that they can respond and reflect values of various data parameters which convey the concept of soil and its changing conditions, creating a periodical portrait of each of the GROW places. The sound maps the tiniest detail of alterations in the data received. The artists created sounds that typically last half a second, and mapped these across hundreds of different possibilities.

Art should not only inform - it should provoke as well. Innovation, insight and artistic interest are often found in the joins and the gaps, the points where not everything runs smoothly. In this case, art helped us address a key barrier to uptake for citizen observatories: trust in citizen-contributed data. In the end, this question of trust was posed by the artwork itself.

GROW Observatory has received funding from the EU’s Horizon 2020 research and innovation programme under grant agreement No 690199.