A smart future for Singapore

In 2013 Drew Hemment got the call – the Singapore government wanted his help staging an arts and technology festival. He explains what happened next. 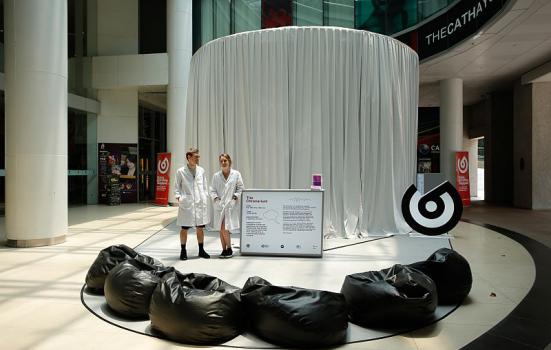 The Chronarium, a public sleep lab

In 2013 a call came in to the FutureEverything office in Manchester. The Singapore government was on the line and it wanted to work with us to develop a tech conference for Singapore. Four months and several calls later, I was invited to drop by Singapore on my way back to Manchester from Beijing. I was shown a very nice presentation on our place in the world, and treated to a week of meetings culminating in a box at the Singapore Grand Prix.

Originally, we were invited to develop a business conference, which no doubt would have been profitable, but for better or worse, I declined and made a counter proposal of a festival spanning art and technology to explore the coming 50 years in Singapore. We were awarded the commission for the cultural festival, the first time the Singapore government has used culture to advance its technology development objectives. Our promise was to deliver highly imaginative ways to engage people in envisioning the future of technology and a ‘Smart Nation’.

By championing open culture, with art and artists centre stage, we hoped to make some small ripples. We proposed that Singapore’s national vision as a Smart Nation needs everyone in the tent – and we can make the tent with you. In the end we accomplished more than we could have imagined. Singapore is highly advanced in technology and innovation, and similarly sophisticated in debates around social values and culture, but these two worlds have been poles apart. Our effort to bridge art, society and technology caught the mood, and we found things waiting to tip. Collaborating with people on the ground – across government and the grassroots – we were able to change the national conversation in Singapore. We selected art and design projects that could give large numbers of people a participatory experience of a smart future. At the centre of the festival was a simple idea: that artists detect potentials in situations, materials and technologies, and create images, objects and experiences that give expression to a possible future. The festival demonstrated how technology impacts on life at a profound level, often interacting with us in fascinating and unanticipated ways.

In developing the art programme, we scoped the issues and challenges facing Singapore today. The art commissions responded to urban living in Singapore, and made tangible its possible futures. ‘Chronarium’ (pictured above) is an art science commission and public sleep lab, in which smart sleep pods induce a change in brain state for busy urbanites. ‘Hello Lamp Post Singapore’ is a new and extended edition of a work first commissioned by Watershed in Bristol that invited Singaporeans to pause to chat to newly sentient objects and street furniture about their vision for a smart future.

We set about finding and connecting interesting people, companies and organisations with a stake in the future of Singapore. People began to get involved from urbanism, architecture, media art, data science, entrepreneurship, social innovation, circular economy, food security, education and the local literary scene. We invited people we felt would contribute a unique perspective and add a novel dimension. There was a focus on new work by and for Singapore. In the ‘Signals of Tomorrow’ innovation lab, artists, designers, technologists and urbanists collaborated to create new innovations addressing societal challenges in Singapore. The winning project, ‘Share and Care’, is a platform to activate the caring economy, enabling people to swap care credits to nurture a stronger sense of community (or ‘kampong’) spirit. (This has been awarded SGD40,000 to be realised as a full-scale project at FutureEverything Manchester in 2016.)

The festival created an unprecedented open and critical debate on the future of Singapore and the national vision of a Smart Nation. In his conference keynote, Dr Vivian Balakrishnan, Minister in Charge of the initiative, championed a people-first take on the national vision, and urged Singaporeans to be active and create the future. In his speech at the opening ceremony, Dr Yaacob Ibrahim, Minister for Communications and Information, presented an argument new to Singapore: “Art is an expression of human creativity, it inspires us to imagine a different reality and challenges technology to find ways to bring those ideas to life in order to imagine the world’s first Smart Nation in Singapore.” This is significant in Singapore, a city state where the government is far more hands-on and influential than in the UK.

My abiding memories of the festival were of people who had been on the outside, who were empowered by these debates and events. They included Serena Pang, a new media artist, who told me the festival changed things for her. Visionary educator Tong Yee gave us the most powerful moment in the conference when he spoke movingly about how Singaporeans can develop ownership and change things. Singapore’s national vision of a Smart Nation needs Serena and Tong inside the tent. For nine days in October, FutureEverything was that tent.

Drew Hemment is Founder and Creative Director of FutureEverything, and a Reader at Duncan of Jordanstone College of Art and Design, University of Dundee.
futureeverything.org