The power of the lullaby

A fascination with lullabies has led Supriya Nagarajan to produce inter-cultural performances and education projects around the world. She tells the story. 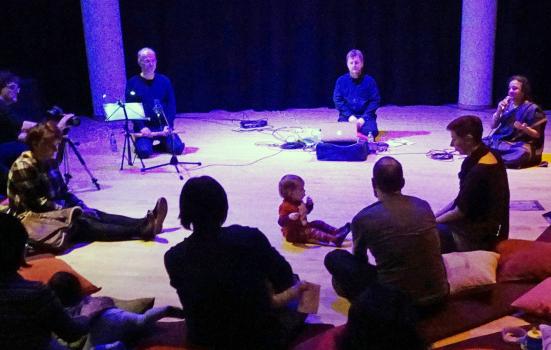 It was a visit to a remote part of the south Indian countryside two years ago that inspired me to create a research project around lullabies. I was passing some paddy fields where the women were at work, while children played and infants slept in makeshift cradles tied on trees as slings. As dusk approached, the women continued to work, but as the children began to get restless I noticed they would take it in turns to sing lullabies.

I watched and listened for almost two hours, captivated by the way the women used their voices in soothing, repetitive rhythms to guide the behaviour of their children who were comforted by the sounds. What is it about lullabies that create this bond? Is it the sound of the mother’s voice or is it the rhythm?

I discovered through my research that the tonality and rhythmic structures in Scandinavian lullabies mirrored what I’d heard in the paddy fields in India. This inspired me to consider and investigate how lullabies can connect people across the world.

My work led me to develop the Lullaby Sonic Cradle, a collaborative audio performance inspired by traditional Indian lullabies. The production process begins in ‘lullaby booths’ located in different communities, where lullabies are compiled and then turned into a sound and visual installation. This is followed by a live musical performance that uses the collected lullabies as part of a wider soundscape.

I have recently worked with senior members of the community in Batley in West Yorkshire. They could clearly recall lullabies from their childhood and the depth of their bond with the lullaby was clear.

Some of the most poignant moments have been the stories shared in the lullaby booths by people from all corners of the world, many of whom having either migrated or been forced to leave their homes. Participants have crossed boundaries to listen to each other and in doing so have become united under a common, shared memory – that of being a carefree child somewhere, sometime.

The project has so far been commissioned in Finland, Norway and Iceland, where I have met artists, educators, scientists and anthropologists to devise and develop the programme. In Finland, lullabies have inspired the creation of a new syllabus for early years music educators to form a bridge between older and newer communities.

Working with artists from around the world, and in conjunction with the University of the Arts’ Sibelius Academy, we staged a performance of lullabies at Vuotalo, a cultural centre in Helsinki. We also staged a performance at the Kamppi Chapel of Silence, which is recognised as an oasis of peace in the city centre.

Another project has seen us collaborate with the Ultima Festival in Norway to collect lullabies from three nurseries and two cultural centres across 40 nationalities. We worked with technicians from the Norwegian Centre for Technology in Music and the Arts to combine the lullabies with distinct sounds of Oslo. A sound and light installation was created and three performances were delivered in collaboration with Norwegian singer Ingebjørg Lognvik Reinholdt, experienced by more than 400 children.

And finally in Iceland we created two lullaby compositions for the Iceland Symphony Orchestra, which were demonstrated in local schools in Reykjavik.

My overall aim is to find new routes to engagement with families and communities, and to find out how lullabies connect people in different communities across Europe and around the world. I believe lullabies can help build a cultural bridge that unites communities.

Supriya Nagarajan is CEO and Artistic Director of Manasamitra.
www.manasamitra.com

The power of the lullaby