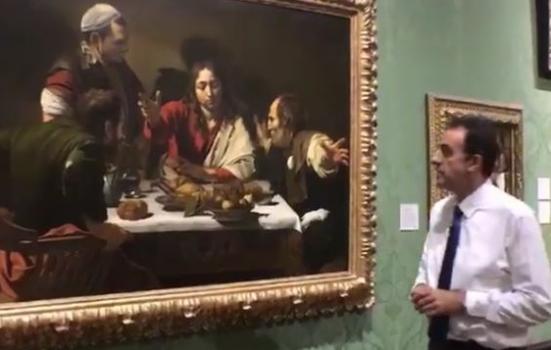 The National Gallery has been hosting live online tours via Facebook Live for just over a year. We have hosted broadcasts from inside our exhibitions and around our collection, led by our curators, education team, Director and Deputy Director.

In a short space of time, live video has also become a key way we communicate with our global digital audience, allowing us to share with thousands of people art and the knowledge of those who work here.

Our most popular live video so far, led by our Director Gabriele Finaldi, received over 200,000 views with 5,000 people watching all the way until the end of the 15-minute broadcast.

Other than wishing to take advantage of this new, engaging technology, online tours were initially driven by the wish to promote our exhibitions. The idea was to give viewers an introduction to the exhibition from the curator, prompting them to purchase a ticket.

We never intended online tours to be a complete replacement for visiting the gallery in person, and this is one of the reasons (other than the fact we know dwell time on social content is short) that we keep our broadcasts fairly concise, giving a taster of what can be seen.

Though we have seen uplifts in ticket sales during the days following broadcasts, it quickly became clear that the segment of our audience who have been most enthusiastic about the broadcasts are those who are not able to come to the National Gallery in person.

Every time we go live we receive hundreds of comments from people all over the world, from Japan to South America, thanking us for giving them the chance to experience our collection and exhibitions. Going live is helping us build long-term connections with people across the globe that might visit the gallery in the future, or have visited as tourists in the past.

Measuring precisely how much footfall an online tour drives is tricky, but the huge numbers of shares and positive comments we receive compared to other content we post on Facebook – including content that is more expensive to produce like short films – shows this is a format our audience has an appetite for.

Going live has been beneficial for our Facebook presence in general. Our reach is significantly higher during the days following a Facebook Live broadcast, and for this reason alone it is worth testing out live video on this channel.

There have been some costs involved in setting up a programme of online tours, but these are minimal considering the numbers we reach and the positive engagement we receive. While I think no one on social media expects a Facebook Live video to have the same production values as an exhibition film, we have found it is worth investing in some pieces of kit to give the audience the best experience possible.

We work with our audio-visual production team on all online tours, and they were able to re-purpose some existing kit in the gallery for us to use, as well as advising on what we would need to purchase.

We film all our broadcasts on an iPhone, and attach the phone to a handheld Hague Motion-cam stabiliser to minimise shaking and keep the picture as steady as possible. I would also highly recommend using a lapel mic. This improves the audio quality and is less cumbersome than a handheld mic.

Planning is also crucial. Before every live broadcast we arrange a walk-through with the presenter in order to decide on the route and test things like the lighting levels. When filming in rooms with low lighting, you may want to consider buying a light as well. Also, this may seem obvious, but we make sure that the lights in the rooms we are filming in are set to stay on for the duration of the broadcast. As we have sensor-controlled lighting, this did cause problems when we were getting to grips with broadcasting live.

We also check that the internet connection is strong enough throughout the route of the tour. We have had some incidents with the signal cutting when moving between different rooms, disrupting the broadcast.

As you can see, our live broadcasts have had teething issues, but our audience on Facebook is generally forgiving, and most just appreciate the exclusive behind-the-scenes access we are giving them.

Previous audience research has shown that people can find the National Gallery intimidating as an institution. Live broadcasts are a way to engage with our audience that feels accessible and authentic, and so our future plans around Facebook Live are centred on trying to strengthen this connection.

We are planning to increase the frequency of the broadcasts and have recently started to host more tours around the National Gallery collection itself. We will be doing broadcasts around special displays, re-hangs of rooms and specific artists. Increasing the range of online tour themes will enable us to show that our collection isn’t static, and that the work on display changes, so it is always worth coming back for another visit.

So far, our tours have followed a straightforward format of one gallery expert per broadcast leading a tour of a few paintings or rooms. In the coming year we will be looking at ways we can make the connection between audience and presenter stronger, and seeing if we can introduce more Q&A elements without it disrupting the flow of a broadcast.

Audiences across the globe have quickly come to expect a much closer connection between what is happening in the physical space, and what we are sharing online. For this reason, live video is a format we are going to continue to focus on and invest in.