Libraries will always be about books and information, but in Manchester they’re also a place for local communities to enjoy live gigs and other arts events. Zoe Williams explains how the transformation has taken place. 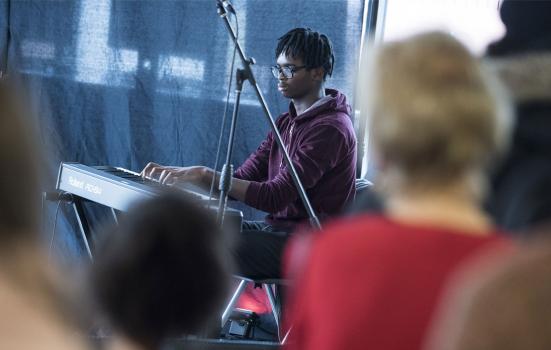 Some of the changes in public services over the past decade have made exploring the link between libraries and culture more fertile. These include libraries coming under Arts Council England’s remit, a greater understanding of the role of libraries as community hubs, and the growing imperative for publicly funded arts and heritage to activate their civic role and effect a step-change around diversity and reach.

In Manchester, the city council’s library strategy has become more outward-facing. While keeping books, reading and information at the core, there is an emphasis on other things, including increasing participation in activities.

As the events unfolded, neighbourhood libraries were transformed as creative, lively, vibrant and welcoming spaces with new partners and people

It all began with the re-opening of Manchester Central Library in March 2014, following a four-year transformation programme. The vision was to be an inclusive space, appealing to families, children and young people and aspiring entrepreneurs as much as traditional library visitors.

As part of this re-visioning, we launched our cultural programme, Library Live. At its heart was a 'Chaos to Order' residency, produced by Brighter Sound and curated by the band Everything Everything, which saw the first live gig in the library.

Alongside this, cultural marketing agency Creative Tourist facilitated connections between the library and producing companies and festivals in the city, leading to a number of partnerships with Manchester Literature Festival and Manchester Jazz Festival.

Today, Library Live exists as a busy and diverse cultural programme for everyone to enjoy. Along with smaller-scale gigs, spoken word events and visual art exhibitions, we also present larger events, where activities take over the whole building.

Following the growth of the Library Live programme, a natural development was to expand the model across the city-wide network of libraries. Initially, we are piloting it at three branch libraries with a programme called ‘Creative Spaces’. However, as we approached this roll-out, our vision of the expansion and the programme of activity was challenged very quickly.

Platform Mcr tendered for the contract to deliver the pilot. Their interview was fresh and exciting as they had experience in community development and activism, as well as arts and producing. They presented a focus on community networks and young people and they asked challenging questions about the attractiveness of libraries as creative venues, both in terms of appearance and external perception. Additionally, connecting with Manchester’s cultural sector was not their starting point. Instead, their focus was on engaging with the communities surrounding the libraries and animating the venues with the content they make or want to see.

Nearly 60 organisations and groups were consulted about the concept and value of neighbourhood libraries as Creative Spaces. This helped develop Platform Mcr’s case for a programme that was community-led, not culturally led.

Following this, the Creative Spaces vision was brought to life through a programme that engaged, inspired and empowered key community contacts through arts training sessions, community projects and three festival-style music and arts events, all titled This Vibrant Thing.

With more than 20 community organisations involved, the potential of the programme began to be realised. As the events unfolded, neighbourhood libraries were transformed into creative, lively, vibrant and welcoming spaces with new partners and people (particularly young people) using the buildings.

The Creative Spaces evaluation consistently demonstrated that the pilot succeeded in engaging new audiences with both arts experiences and libraries. Audience Spectrum segmentation tells us that the events engaged audiences from all four least engaged groups, including 'Kaleidoscope Creativity', a group characterised as the most culturally and ethnically diverse. This demographic accounted for 23% of branch event audiences, compared with a representation of 11% in the local resident adult population.

Among the 100 young people who participated in activities leading up to This Vibrant Thing, most were new to the libraries. They reported a wide range of positive outcomes, including developing confidence, feeling more empowered and able to have a voice in their community, along with gaining creative leadership and volunteering skills. They shared their work at the events and promoted them through their local networks.

There were challenges along the way. Our original strategy was to engage community members as cultural ambassadors, but this didn’t happen and probably wasn’t the right approach. Instead, leadership is evolving more organically from library staff themselves, many of whom live locally and have experienced the positive impact of the events.

We have a number of artistic and cultural partners who are energised by working with libraries. They help us push the boundaries of what we think is possible and add great quality content to our programme. This is not all new: libraries have probably been offering space for community creative activity and delivering arts, crafts and literature events ever since they have existed. But our new initiatives are taking this trend in increasingly exciting directions.

For a video about ‘This Vibrant Thing’ click here.