A shift in mindset for cultural governance

Becky Chapman and Ben Qasim Monks are co-chairs of the board at Exeter Northcott Theatre. They share how they have shifted from an ‘oversight’ model of governance to an emphasis on ‘insights’. 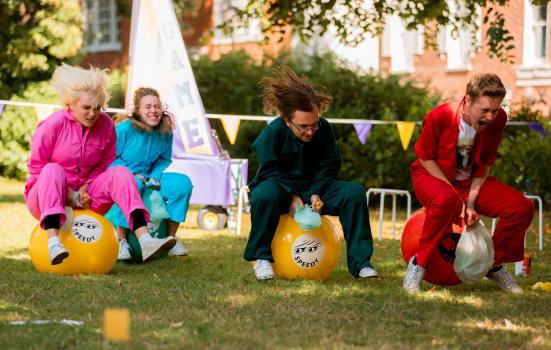 The A Game, performed by Young Creatives employed on Kickstart scheme.
Photo:

Developing governance is a key priority in ACE’s Let’s Create delivery plan, which means in future arts organisations will increasingly be evaluated on their governance practice. As previously argued in ArtsProfessional, co-chairing can be particularly appropriate in the context of societal change. Becky and Ben share what their experience has taught them.

Becky: It’s sharing a role that’s traditionally held by one person at the top of a hierarchy in the charitable cultural sector. Co-chairing signals a distribution of the assumed power of that role.

Ben: Yes, co-chairing signals a shift in mindset. Instead of being led by an individual, co-chairing means you’re led by a conversation. So, co-chair is an unsatisfactory term for what’s happening. It’s more like convening, or holding space.

Becky: I like the way the term co-chairing instantly provokes a question and suggests a challenge to the norm, but it’d be great to get rid of the word chair altogether - it’s archaic and unhelpful.

Ben: It’s also about sustainability - one person on their own couldn’t do this. We need to share the voluntary labour of trusteeship more widely – it’s unsustainable and exclusionary - you’ve got to have privilege to donate your time. An organisation can’t be truly representative of its community until it has structures where more people can participate. Certainly, the conventional board set up feels at odds with our principles and values.

How does it differ from other trustee roles?

Becky: It’s strikingly different. Before we arrived, the Northcott had explicitly engaged more varied voices in a large trustee team. It’s so vibrant. But, as Ben says, we’ve not overcome the deep problem of the structure being exclusive. Everyone serving as a trustee has capacity and flexibility to donate their time. But where are the people who can’t? Who’s missing?

Ben: The fact we didn’t know each other before sounds as if it shouldn’t work, particularly as it’s a leadership role. But getting to know each other while in post has meant we’ve worked in a way and at a pace that has been considered and careful. The work’s maybe been more human-centred, rather than decision-centred.

Becky: Ben and I are so different but talking to someone coming from a different perspective and arriving at the same place, was reinforcing and energising. We give a good bit of the week to this and you can’t do it without a bit of spark.

Ben: There are times we don’t agree but I enjoy those moments because I have faith in our shared principles and values. Disagreements allow us to hold opposite sides of a dialogue productively.

Becky:  It’s an opportunity to learn, to have a professional relationship that cuts through the noise of the day to day. Also, we’re clear with the executive about what’s needed from us at any given moment to stay on track and give everything a bit of oxygen.

Ben: Familiarity with previous ways of doing things takes time to shift. And meeting the needs of staff, audiences and artists while also trying to facilitate a shift in culture means we have to juggle different modes and tones.

Becky: We’re only just coming out of Covid - it’s feels we're only at the beginning…but change is hard work.

Ben: Also, we don’t know if we’re right or if this is the right model, but we’re not going find out unless we question it.

How easy is joint decision-making?

Ben: I’m not sure that’s the job of the chair. It’s to ask questions more than make decisions….

Becky: …facilitating other people to ask questions and focusing the conversation. The Northcott’s team is much better placed to make decisions than we are. We’d like to find a structure that moves authority and agency to where the knowledge and experience is held.

Is everything slower when you have to reach a consensus?

Ben: Yes, it’s slower and slowing down is a good thing. We all work at an unsustainable pace with old-fashioned ideas of linear progress, which is bad for our wellbeing. Slowing down is a great thing if you want to make better decisions with care. There’s better quality and depth of work.

Becky: We know the pace we go at in the arts is exclusionary and exploitative. Slowing down includes more people and benefits all of us. And notions of efficiency are so misplaced. The Northcott is not a factory - our business is the humanity in and around us. We spend time talking about bottom lines and deadlines, but what’s important is listening to the voices traditionally unheard and providing a platform.

Ben: And taking time to reach consensus is arguably more efficient than having meetings where no-one’s taking ownership and everyone’s waiting for someone else to take a decision.

Ben: One of the things Northcott’s always done is regenerate and reinvent. It’s been a university campus theatre, a theatre for the city of Exeter, an organisation in administration, and an NPO funded theatre.

We’re now regenerating into a Northcott for 2022 which is not one single building but an enabler of creative conversations spanning the city in multiple locations, as well as at the Barnfield and Northcott Theatres.

Becky: Ben and I are not here because we’ve can do anything better than anyone else. We’re here because we’re responsible for increasing community agency in that cultural conversation and that idea informs our internal structure too.

Ben: Yes, theatre’s all about conversation – it’s a simple model that’s stood the test of time. Northcott’s role is to make accessible spaces where dialogue can happen with everyone. It requires new resources and new ways of thinking.