A lack of diversity will persist unless unfair levels of pay are addressed, says Becky Chapman. 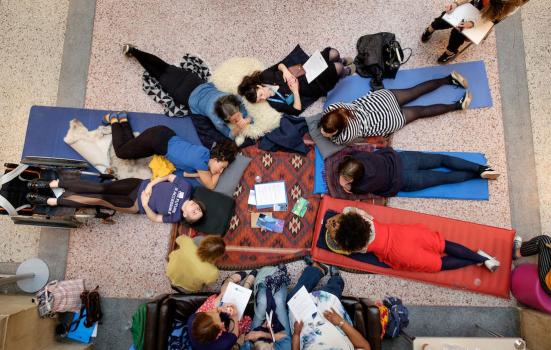 A 2018 Conference at Diverse City
Photo:

We work in a sector where imagination, collaboration, empathy and innovation rule. Artists reimagine the world. So how come our workplaces are so stuck? How come offices outside the rehearsal room are hidebound by inflexibility, presenteeism and hierarchy? Who does this serve, and who does it exclude?

My 37-year, invisible investment is never acknowledged and never quantified

I’ve been working in the arts for 37 years, in the UK and Australia. I’ve been salaried, run a start-up, closed a start-up, been freelance, worked in venues, worked in touring. You name it, I seem to have done it. But it’s only in the last three years that I’ve been recognised as a senior arts professional, with all that comes with that. It’s been such a slog to get here.

Like many women (and in my career it has been mainly women), I’ve had career breaks that meant starting again - and then starting again, again. I’ve also pretty much been a single parent for 22 years (10 years officially, but you know what I mean) and most recently I’ve cared for an adult daughter with a chronic illness. In middle age, I found myself going back to junior project management positions alongside ‘build your job’ roles where a day a week extended to cover whatever was necessary. And I’ve swallowed it.

I swallowed it when told that I’d have to pay full whack to put my kids in holiday drama classes of the national youth theatre I worked for, in order to deliver their annual programme. I swallowed it when my sick child slept, tucked up under my office desk because I ‘had to be there’. I swallowed it when I raced up the M5, way over 90mph, fresh from some ‘essential’ team meeting, attempting to provide homework/friendship/mealtime support via handsfree.

And now? In 2016 I started working full time for a theatre company with totally flexible, remote working practices. Our 14-strong workforce is ‘distributed’ across London, Brighton, Swanage, Bristol and Gloucester. We hire based on talent, not geography. We have no central office, no fixed hours and no monitoring of time off. It’s a high trust, high autonomy ethos where everyone’s expected to manage tasks and time in ways that work for them, so they can do their best work. We’ve created as flat a decision-making framework, and as generous a salary structure, as possible. Company leadership is also distributed, so no one person carries the weight of the organisation. We have remote team meetings and quarterly three-day sprints. We eschew email in favour of instant messaging platforms and Slack calls.

In the opinion of our Co-Artistic Director, Jamie Beddard: “We work far more productively when we're happy, so we need to create environments and conditions that foster contentment. Hence the importance of remote working, autonomy, high trust, creative and company retreats, sea walks, support when needed, good food and access for Diverse City.”

So I’ve finally been able to work in a way that fits around me, where my children are and how my life is. Phew. But more to the point, it means that our company gives many more people the chance to participate professionally and be economically active in the performing arts. It’s a ‘work home’ to single parents, disabled people, people caring for parents, those living with chronic illness or mental health issues, and our ages range from 22 to 59. And together, we’ve have been able to develop the organisation to a point where this year my salary will be £38,000…

Oh wait - that doesn’t sound right. Just over £1k for every year of experience? £8k more than a starting salary for a teacher? Last time I looked, the arts and culture sector generates more than £10.8bn a year for the UK economy, and the sector's productivity is greater than that of the economy as a whole. So what’s going on? I’d be the last person to say that ‘years in the game’ is the only gauge of worth. But it looks to me that, like many female arts workers moving into the late stages of their careers, I’m a secret and unsung arts philanthropist.

My 37-year, invisible investment is never acknowledged and never quantified. In fact, years ago, I was advised not to include some of my time ‘in kind’ on an Arts Council England (ACE) grant application because it weakened the sustainability of our case. So sure, I’ve been buoyed up by the privileges of my ethnicity, class and generation, by state-supported higher education, universal benefits, and - indirectly, and slightly begrudgingly - by the IT sector (via the salary of my erstwhile partner). Lucky me. But the implications are deadly serious. The fact that people like me make this invisible investment to work in the arts is a ‘dirty secret’ that is locking people out of the sector and forcing people, particularly women, to leave it before they want to. It’s the central contributing factor to the massive underrepresentation of working class people, D/deaf and disabled people and people of colour in the arts. And yet no one talks about it.

The lack of diversity in the governance, leadership and workforce of publicly-funded culture “remains intractable and unacceptable”, says Simon Mellor, a Deputy Chief Executive at ACE. But it’s intractable because the people who hold power can’t see its roots and haven’t navigated its reality. So long as the myth of meritocracy is alive and kicking in the arts, so long as power remains unshared, so long as we keep trying to fit square pegs into round holes, there won’t be people working at a level where they can shine a light on the sources of the problem. The question is: how might we do it differently?

I'm sure I'm not the only person who is fed up to the back teeth of women saying they are hard done by. Try being male, 60 and white, then you'll know what sexism and ageism is. Any job would be nice, never mind not being offered reasonably well paid jobs. Last year, despite 40 years in the arts, a PGCE, a 1st Class Honours degree and a Masters (Distinction) I spent 6 months out of work, unable to find employment in the arts, teaching, shops, kitchens, factories.... It isn't just women who are sidelined, it is not just people of colour who are sidelined, it is not just older women who are sidelined, we are all sidelined for some inexplicable reason. And if you have a job I suggest you are grateful. I work 3 days a week in a garage despite training at Bristol Old Vic, stage / production managing 12 dance / theatre / puppet companies, stage managing 3 venues, running an arts centre in Cornwall, project managing some pretty large exhibitions / sculpture trails and running my own theatre companies (2) for 4 years. And who gets almost every single one of the jobs I go for? Women. As an arts administrator I can't get a look in. I tick no boxes. And when employees 40 years younger than me decide whether or not my experience is suitable how on earth can they decide? Britain is institutionally ageist and sexist. As people like me know to our cost........