What to do when you’re sick of Zoom

Heidi Wiley and Hélène Gauthier share how they created a virtual venue - and why they think this provides a model for the future. 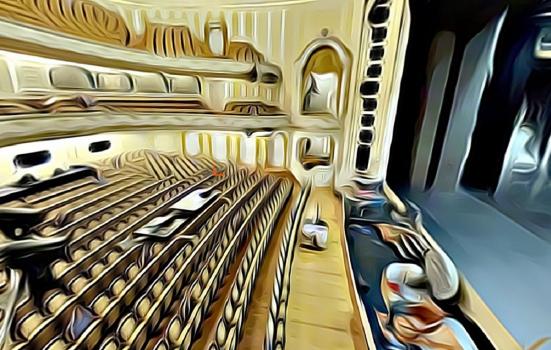 Looking at the auditorium from the theatre box © CyberRäuber

In September 2020, our arts organisation, the European Theatre Convention — an EU-funded network of over 40 theatres — was faced with a problem.

We had spent the best part of the year getting ready for the European Theatre Forum, a high-level conference connecting theatre makers with European politicians and policy makers. In close collaboration with our partners, a consortium of 11 European theatre and performing arts organisations, and with funding from the Creative Europe Programme, we had curated an intense three-day programme. Seventy speakers had been engaged, including members of the European Parliament and the European Commissioner for Culture; a venue, the Staatsschauspiel Dresden, had been secured.

But as the pandemic progressed, it was clear that an in-person conference would have been unrealistic and irresponsible. We couldn’t afford to let all the work go to waste, but the prospect of switching to yet another bland set of Zoom webinars was artistically uninspiring.

With two months left until the forum, we searched for something new. Our colleague Alice Burrows, the Forum Project Coordinator, drew inspiration from RadarOst, a virtual festival we had just attended at Deutsches Theater Berlin. This included a digital capture of the theatre building by artist collective CyberRäuber. Why not use this to recreate our own venue?

We’d worked well with CyberRäuber a few times on digital theatre projects. We knew they would have the expertise to pull this off and lots of ideas about the design but would listen to our own expertise and knowledge of our audience. We also knew the key feature we would need to ensure successful networking during the event: reliable, in-app video conferencing.

We pitched the idea to the funders, were given the green light, and developed the project from there.

Once we had a vision, we were able to start planning the forum as if it were taking place in a regular venue. We allocated the room hire budget and worked with an online dramaturg to curate the flow of people, networking opportunities and accessibility of the event.

For the 150 ‘on-site’ attendees, the experience was a fraction of a step away from realism. After entering a dedicated microsite, they found themselves outside the Staatsschauspiel Dresden, on a sunny day, with the building rendered in a sort of Van Gogh-inspired impressionism. They could drag the cursor around the screen for a 360° view from where they stood. After clicking on the entrance to the venue, they arrived at a staircase, with the choice of clicking on the auditorium to the right or the bar on the left.

In this way, attendees were able to explore almost the entire venue. Meeting icons in each room launched an open-source video chat software, Jitsi. Once they were inside the auditorium, attendees could look at the stage and follow the conference programme — tuning in to a live webinar, or a Zoom meeting with participants — or explore the other spaces in the venue, such as the rigging loft or ‘secret staircase’.

Our hope was that in clicking through the space, attendees would simulate the experience of wandering around a venue, making spontaneous conversations with strangers more likely. After all, that’s one of the biggest pieces missing from in-person events — the random encounters.

On the first day, it seems people were still finding their feet in the digital venue, helpfully documenting their experiences on social media. By day three they were more comfortable, using recognisable conference speech, like “I’ll see you in the bar after the keynote”. We also received feedback that the game-like design and lack of strict direction helped people feel at ease.

There was a learning curve for us too. The in-platform chat wasn’t used as much as we would have liked, with people preferring to use external forms of communication (Whatsapp, for instance) to arrange meetings inside the platform. This is partly because it was not clear who else was already online. Next time, we would introduce some tech to show users who was in a particular room or video chat before joining. Ideally, this would help attendees feel like they were exploring the conference together and make it easier to arrange meetings.

We also realise that having such a dense programme may have been to the conference’s detriment. A packed 4+ hours of sometimes simultaneous conversations followed on an open livestream by 12,000 people from 55 countries naturally meant that people split their attention between exploring the venue and following the conference. The afternoons were intentionally left free for networking, but the sense of ‘free time’ is, of course, different when people are digitally attending a conference.

Our hope is that the digital venue serves as a piece of inspiration, laying the foundations for what comes next. We are confident we created an experience that looked and felt nothing like other conferences. Despite being held in an immersive space, the forum retained its goal of kick-starting necessary policy debates about the sustainability of a Covid-hit theatre sector: the European Commission launched the new ‘European Theatre Initiative’ line of strategic support at the event. CyberRäuber have since been approached by other organisations to do similar building captures, suggesting there is something of a legacy.

In the future, when meeting ‘as normal’ is possible once again, the immersive conference experience may continue to be relevant. As discussed at length during the forum, it is perhaps no longer justified to emit so much carbon flying to other countries for one-off events. As digital solutions get closer to the real thing, we may be able to reduce the need to travel so extensively – and instead allow that travel to be digital in nature.

What to do when you’re sick of Zoom