Give us a goal!

Taking inspiration from the local community for a new musical about a nightclub proved so successful for Oldham Coliseum that they’re doing it again. Cathy Crabb and Lindsay Williams tell the story. 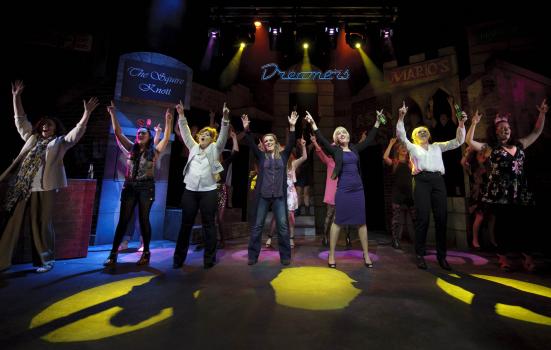 The performers in Dreamers
Photo:

In 2015 Oldham Coliseum Theatre had success with a musical called ‘Dreamers’ about a nightclub in the town. It was set in the 1990s when, despite a downturn in manufacturing, Oldham’s town centre was thriving both day and night and people came from far and wide to the nightclub.

Before rehearsals started we ran a sharing event, joined by Kevin Shaw, the theatre’s Chief Executive and Artistic Director, and actress Sally Carman who was playing the lead role. We invited people to share their memories of nights out at the club and recorded the conversations. Anecdotes naturally worked their way into the final drafts of the script.

During the run of the play, the theatre was decorated with signs that had once hung in the nightclub, and on the opening night we were joined by one of the former DJs, playing memorable 1990s tunes in the bar after the show.

Heart of the town

Not long after, we started thinking about what to do next. We wanted to find something with the same kind of vibe – a musical that really got to the heart of the town. ‘Dreamers’ was about good memories and a love of the nightclub, which in reality wasn’t that great (sticky carpets, scary bouncers).

We hit upon the idea of Oldham Athletic Football Club. Like the town, it has had its ups and downs but has retained a loyal fan base. These fans became the inspiration for ‘Meat pie, sausage roll’, taken from the football chant which finishes with “Come on Oldham, give us a goal”.

We talked to friends and family about their feelings for the team, often getting a teary reaction about one season in particular, 1990–91, when the team was promoted to the top flight. We decided we had to follow that journey in a story.

We thought about the setting for the musical. The area around the football ground is very evocative. Even if fans don’t live there, they know the area because they’ll go to the pub and they walk in a big tribe down certain paths and streets. These naturally become the streets for our story.

The play features a blossoming love story between two young people from different communities. Najma Khalid, a respected community leader and fellow writer and storyteller, was our insight into British Asian family life. Keith Head, a staunch and well-known Oldham Athletic fan, was another source with stories related to the game, what it means to be a fan, and most importantly for us, what it means to have a relationship with someone from a different community.

We ran another sharing event, joined by Kevin Shaw, who will be directing the piece. We collaborated with the Oldham Evening Chronicle and the Oldham Athletics Reporter wrote an article inviting fans to have a pie and a pint with us, share anecdotes and sing all their football chants, which we recorded.

There was a lot of subject matter to mine and the passion of the fans was inspiring. After the sharing event we took the composer of the music to a match to get a real feel for the chants and the atmosphere in the terraces and embroider it into the music. We’re hoping there will be some fans in the show’s chorus.

Football fans and theatre audiences are not typically the same, but we hope that the play brings a different crowd to the theatre and in turn a new crowd to the football club’s home games. We are working closely with the football club and Trust Oldham, the club’s supporters’ trust, on cross-promotion to raise the profile of the musical and the club.

‘Dreamers’ exceeded its target for audience numbers, with over 500 new people seeing it who had never been to the theatre before. It was a locally based story with a universal message at its heart – fond memories of the glory days. We’re hoping for the same effect with ‘Meat pie, sausage roll’ where a play is owned and championed by its local community.

Give us a goal!