A slow but sure strategy

Sue Ball explains why she believes that ‘slow architecture’ is the most effective way to create a sustainable future for depressed industrial sites. 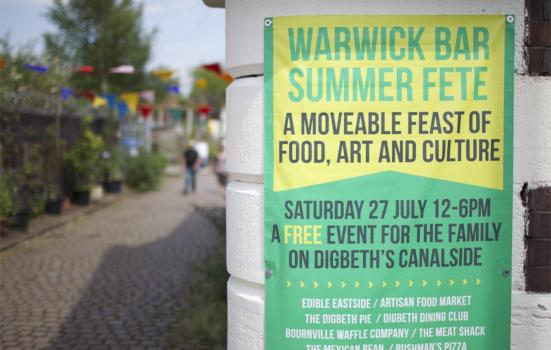 ‘Banks of a Canal’, the last poem written by Seamus Heaney before he died last year, was inspired by the quiet beauty of a canal painted by the French artist Gustave Caillebotte where, he wrote, time is “slowed to a walking pace”. The poem was published just days before an independent report 'The Warwick Bar way: appraising and building on slow architecture’ revealed that the slower and more organic approach to regeneration at Warwick Bar, a cultural quarter of Digbeth in Birmingham, has quietly and powerfully transformed this canalside area.

Taking the slow architecture principles, I am now working with the Canal & River Trust and its asset teams on schemes at Victoria Quays in Sheffield and East London’s Limehouse Basin. Working as a curator/producer in public contexts over many years, I perceived an increasing urgency to relocate my practice to effect some degree of systemic change in the relationship between landlord/developer client, commercial agent, cultural producer and tenant, to unlock the potential in land and property to excite and play host to new uses and economies. I had worked with ISIS Waterside Regeneration on its London and Leeds schemes and was asked to see how things could be done differently at Warwick Bar, a canalside scheme in Digbeth, Birmingham. ISIS Waterside Regeneration had taken a critical look at regeneration and recognised that for long-term place-making with enhanced returns, sustainability had to be the guiding principle. Its objectives include delivery to the bottom line and maximising capital, in addition to mitigating pollution, optimising green space, with wellbeing cutting across all agendas. Local involvement, it believes, will help to deliver lasting value. Perfect – so there was a point of departure for our collaboration and an alignment to facilitate ‘a politics of possibility’ in urban space development.

The site in 2010 was a loose assortment of industrial buildings, some listed, with less than 20% occupancy, including a steel sheet production factory, concrete batching plant and light industrial units, two of which were leased by Grand Union which included eight high-quality artists’ studios with exhibition space. Other units were occupied by tyrefitters, panel-bashers and used for storage.

Four years on, the site has supported the gradual re-occupation of its 43,000 square feet of lettable space to include a varied mix of heavy industry with the arts and architecture alongside. The area is home to Grand Union, Vivid Projects, K4 Architects, Edible Eastside, Rogue Play Theatre, Stryx, Homes for Waifs and Strays, alongside fabricators and makers servicing the independent retail sector, commercial printers, an art materials shop and a boat-based laser-cutting outfit. Fierce Festival has used the site and I have established paid artists' commissions through a self-financing system.

Bringing a range of concepts, practices and methodologies to the project, I used an ‘action research’ approach to understanding the site, with both client and commercial agent actively involved. By using appreciative appraisal, rather than a focus on its deficits, to review the physical, environmental and human assets, we revalued the spaces, units and hard-standings by running a series of ‘Open Door’ events. We invited interested parties and potential users to view the spaces so that we could hear where their interest lay and how we could best support future occupation.

We define slow architecture as creating a structure or ensemble of structures gradually and organically with regard to sustainability criteria, as opposed to rapid construction to achieve short-term goals. The benefits for all stakeholders is that it supports a live programme of continuing professional development and learning, allowing the project team to take risks and try out alternative ways of working. In this way we can identify, test, review and resolve complex issues of place-making and site sustainability.

The development of a new range of license and lease agreements by commercial agents Colliers International was both innovative and key to our success. Paradoxically, by offering temporary licenses or short-term leases with affordable rents, our outlook was longer term. This was a critique of the much vaunted ‘meanwhile use’ policies that can destabilise an arts ecology through insecure occupation of space, ultimately working against the creation of a destination which organically grows through tenants’ investment in their space and relationships with those around them.

Where to next? In the wake of the planned arrival of High Speed Rail 2 at Warwick Bar, there is a growing strength of voice within the tenants’ community that the value created by them, with others and for everyone, should be treasured.

Sue Ball is Producer and Director of Media and Arts Partnership.
www.maap.org.uk

A slow but sure strategy