Leadership style is changing, from the extrovert personality controlling from the front to someone who shares power and develops and fosters relationships, believes Sue Hoyle. 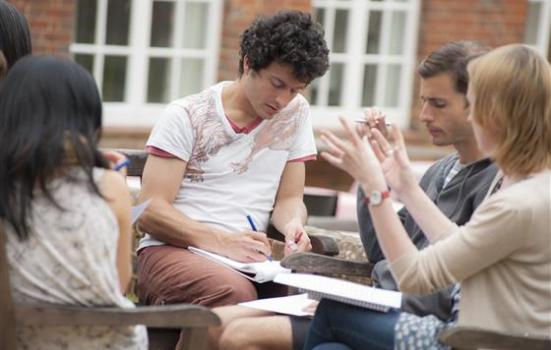 Clore Fellows working together on a collaborative project

“We are seeking a visionary, innovative and creative leader, who is entrepreneurial yet prudent; an outward-facing communicator and an excellent manager of people; brilliant at fundraising, financial control and risk management; someone who pays close attention to operational detail and long-term strategy; works independently but is responsive to the demands of multiple funders and sensitive to the need for robust governance.”

They’re not asking for much, are they? Perhaps boards and others responsible for appointing leaders are looking for the impossible and placing unrealistic demands on our cultural leaders. So what actually is reasonable? What makes a good leader?

Historically, we have been encouraged to adopt a particular leadership style which is personality-driven: a charismatic extrovert leading from the front. But this may not always be what is needed in a contemporary, complex, more networked world. Increasingly, we are seeing successful examples of a different sort of model.

In my view, excellence in leadership is not defined by personality type, but by values and behaviour. A willingness to share responsibility and power may be one of the key characteristics of cultural leaders in the twenty-first century, together with a drive to build strong alliances, beyond their organisation or sector, with individuals, groups and communities, from the local to the global. This kind of ‘generous’ leader develops and fosters relationships, rather than being fixated on command and control, and is concerned about values and behaviours, rather than status and position.

Since she founded Sampad over 20 years ago, Piali Ray has worked selflessly to build alliances with individuals and communities in order to bring about significant change in intercultural relations and understanding of South Asian arts. She is sure of purpose and visionary in delivery. As an animateur in the 1980s, Piali got people dancing, working with schools, community groups and others previously excluded from local services. She found that participants were keen to discover Indian dance, but there was also "a thirst for knowledge about what was behind the dance" and "also a need to change perceptions about it: that it's not just an exotic thing that happens thousands of miles away. It's part of the cultural fabric and make-up of this country" (The Guardian, 2003). She has grown from being an animateur to an ambassador for South Asian arts. Her work remains deeply rooted in Birmingham, but its impact is felt across the UK and beyond.

Just as they are responsive to the needs of the communities with which they work, generous leaders also empower – and share success with – colleagues. Tessa Ross, Controller of Film and Drama at Channel 4, has been a driving force in the production of films as varied as In Bruges, Slumdog Millionaire and 12 Years a Slave. When Danny Boyle announced that she was to receive BAFTA’s award for Outstanding British Contribution to Cinema, he spoke of her as a “shy genius”, describing her as a visionary, a passionate champion of new creative talent with “an uncanny instinct”. In accepting the award, Tessa, with customary modesty, said she owed it “of course to the wonderful film makers I’ve had the privilege of working with – and to my team at Film4, with whom I share it”. Tessa is generous and self-effacing and at the same time risk-taking and focused, with sure-footed judgement.

Nicholas Serota is respected internationally as an exceptional cultural leader and a courageous champion of the arts. He is also a superb fundraiser and imaginative strategist. Nick exemplifies the kind of leader who combines vision and determination with a commitment to bringing out the best in others. He views mentoring and coaching colleagues as one of his core responsibilities as a leader, and encourages his senior staff, such as Sandy Nairne or Alex Beard, to take the next steps on their professional journey – to be chief executives of the National Portrait Gallery and the Royal Opera House respectively. He remains personally modest about the contribution he has made to our understanding of contemporary art, seeing himself as part of a team and giving full credit for the achievements of the Whitechapel Gallery and Tate to colleagues and board chairs. But, as Calvin Tomkins wrote in The New Yorker: “Although Serota, the driving force behind Tate Modern, wouldn’t think of claiming credit for this turnaround, his primary role is acknowledged by virtually all his professional colleagues.”

Such leaders recognise the contribution made by their collaborators. In some cases, however, this can be taken further to a shared or ‘distributed’ leadership model. The Stage recently published its power-list of leaders in theatre, and out of the top ten, only three are individuals and the rest are two-person teams, headed by Rosemary Squire and Howard Panter. In other areas of the arts, duos like Farooq Chaudhry and Akram Khan, or Julia Peyton-Jones and Hans Ulrich Obrist, demonstrate that today’s challenging mix of leadership demands is often best shared across two or three pairs of shoulders rather than one. This is not a new phenomenon – after all, it is over 60 years since Alicia Markova, Anton Dolin and Julian Braunsweg founded English National Ballet and even longer since Michael Powell and Emeric Pressburger started working together. Over the past few decades, there have been many examples of successful partnerships in leadership roles and I would argue that one of the strengths of this model is its ability to harness complementary skills and values to a shared vision.

One example of this shared leadership model is Artsadmin, which mentors and develops over 500 artists a year. According to dance artist Rosemary Lee, the team there, led by Gill Lloyd and Judith Knight, remains “unpretentious, non-name dropping, non-bandwagon jumping, non-manipulative, honest, caring, dog and child loving, perfectionist, professional, dignified and 100% committed”. She describes working with them as being “a true collaborative experience”. Journalist Lyn Gardner agrees: “Because it works, and because they don’t go around blowing their own trumpet, Artsadmin tends to go unsung, but... it is clear that the traditionally icy relationship between the experimental and the mainstream is melting faster than the polar ice cap”. She points out that this “welcome thawing is due in no small measure” to Artsadmin. “We should cherish them.”

My final example of this kind of strong and generous leader is Ciara Eastell, Head of Libraries, Culture and Heritage for Devon County Council and President-Elect of the Society of Chief Librarians. Ciara remains focused and clear-sighted about the value and relevance of libraries in a climate of uncertainty and challenge, including severe budgetary constraints on local authority spending. In a blog last year, Ciara described how, as a Fellow on the Clore Leadership Programme, she discovered, from being part of a peer group which included choreographers, theatre directors and other artists, that creative thinking was one of the most important skills for leaders to acquire: “I learned that creativity isn’t about something being right or wrong; it is about the space to think and reflect on the world, your role in it and the value of the work you are doing... None of us are robots, going about our jobs with pre-programmed rules of what’s right or wrong; good or bad – all of our work, at whatever level we work, is about making judgements” (Create / Innovate, 2013). In an increasingly pressured environment, with a plethora of demands and expectations placed on leaders, Ciara emphasises the importance of finding time for quiet reflection.

All the leaders I have discussed above display personal humility, courage, good judgment, certainty of purpose, authenticity and generosity in delivery. They share responsibility, while being ultimately accountable for the well-being of a project or organisation. They possess a steely resolve and emotional resilience, and are ambitious for their organisation or cause, rather than for themselves. They all inspire and encourage a committed team who are enabled to play to their strengths. Perhaps above all, they have a creative backbone, a passionate commitment to the arts and to artists.

In today’s fast-changing, uncertain and complex environment, I would suggest that these are the qualities that an ambitious board should be seeking, rather than focusing too much on a checklist of technical requirements.

Sue Hoyle is Director of the Clore Leadership Programme.
www.cloreleadership.org

Applications for 2014/15 fellowships are now open