A recent British Council report says that the arts and culture are vital in making a country attractive to foreign visitors. Sue Hoyle delves a little further. 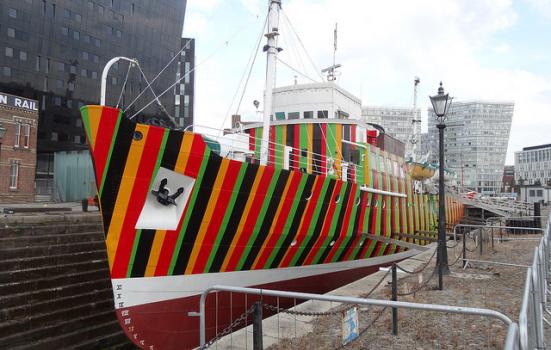 Liverpool Biennial’s dazzle ship by Carlos Cruz-Diez: Could Liverpool be the next Berlin?
Photo:

The recent British Council report As Others See Us examines what makes a country attractive to 18 to 34 year olds living in Brazil, China, Germany, India, the US and the UK – all of them considered to be future professionals and potential leaders in their countries, regions and sectors. Compellingly, cultural institutions and historic attractions top the list, with the arts placed highly too, above business, technology and sport to name a few. When I read the report it seemed like there was an important story being told here, and I wanted to learn more. I decided to conduct some informal research of my own among a sample of cultural professionals from Egypt, India, Singapore, the Netherlands, China and Hong Kong. All of them were in the UK at the time – some for postgraduate studies, some on short visits, one working and a few as fellows on the Clore Leadership Programme. They included a poet, a communications manager, a visual arts curator, a festival director, a dance programmer, a dean in a school of art and technology and a theatre practitioner.

Much of what they said chimes with the findings of the British Council’s research. A curator from Hong Kong felt that the British are rightly proud of a heritage which includes language, literature, history, sport, music, fashion and visual arts. The people I spoke to also welcomed the variety and innovation of our cultural life: “The artists dare to go crazy”, said one, while another said: “I can go to any kind of dance class, from flamenco to kathak to ballet.” For an Egyptian festival director, the UK is a “sort of homing ground for arts from across the world, and its diversity adds to its appeal”.

My interlocutors also told me that artistic quality is high in the UK, international artists feel safe and the arts are topical, dealing with current events and concerns. They appreciated the way in which culture is linked to tourism and economic growth, the importance we place on intercultural dialogue and programmes of exchange, and this with reference to the British Council, on professional development for emerging artists and arts managers. Our reputation for arts education, and the learning programmes of our cultural institutions are, I was told, second to none.

A postgraduate student from Mumbai felt that we have a culture that some countries feel quite aligned to, a familiarity which stems from former colonial relations, a shared way of working which is non-direct, and a common cultural ground to borrow from and re-appropriate, which adds to its appeal. “The potential for growth and learning, not just academically but also culturally and experientially, seems strong”, she said.

Speaking more generally of the UK cultural scene, a young Chinese arts professional questioned whether the UK hogged the limelight too much on the international arena: “It’s kind of the centre of the world, with others at the edge. It feels like you’re dancing in the ballroom, but you also need to allow others to dance in the centre and move to the edge occasionally.”

As this last quote shows, there was ambiguity and home truths in some of the feedback. Another home truth was that it still seems too white-orientated and not reflective of the diversity of British society. Someone else told me that although London was pretty much the centre of Europe for most cultural professionals who have mastered the English language, it is not all about London: “In the south of England the artist is treated as a scavenger looking for what final scraps are left whereas in Liverpool the artist is seen as a worm tilling the soil.”

This reflection on Liverpool intrigued me. If the cultural balance between London and the rest of the UK does indeed need to be addressed, what is it about Liverpool that we should be learning from? I decided to get the thoughts of a European artist, who, having spent time in Liverpool, felt that it could become the next Berlin. Artists talk to each other all the time, she explained. “What’s it like in Bucharest? In Sao Paulo? What’s happening in Prague? In Cuba? In Cochin? Those are some of Liverpool’s competitors. Where can I set up a printing press, open up a gallery or set up a dance studio, run workshops in glassblowing but still have access to basic services like education for my kids?” She gave many reasons why Liverpool could be the next Berlin, and I’ll pick out a few. She spoke of some of the practical advantages, such as low rents and space, and the investment in knowledge-based institutions such as the new library. She also spoke of the less tangible attractions, citing the collegial nature of arts and cultural institutions: “Collaborative independence is attractive to the artist.” She felt there was an understanding that culture is a regenerative force to the economy and contributes to the wellbeing of the community. She spoke of the relationship between cultural and civic leaders who trust and value each other’s expertise. She pointed out that Liverpool is a port, so it is used to population movements, the influx and export of ideas, art movements and goods. Organisations like Tate Liverpool and the Liverpool Biennial, she suggested, provide “a connectedness to a wider world, a potential for trade, the exchange of narratives, expertise, knowledge, ideas”.

And so while the British Council’s report provides compelling evidence of the importance of the arts and culture in keeping the UK attractive, these perspectives on Liverpool provide an important reminder, and point the way forward. They can ensure that our cultural offer remains a national picture, rather than a London one. One of the ways to strengthen perceptions of UK culture is to focus on those towns and cities, like Liverpool, Glasgow and Newcastle/Gateshead, that recognise the value of investment in culture. Many of the next generation of artists will emerge from them.

Sue Hoyle is Director of the Clore Leadership Programme.
www.cloreleadership.org