After almost a decade guiding others at the Clore Leadership Programme, Sue Hoyle reflects on those that have influenced her career. 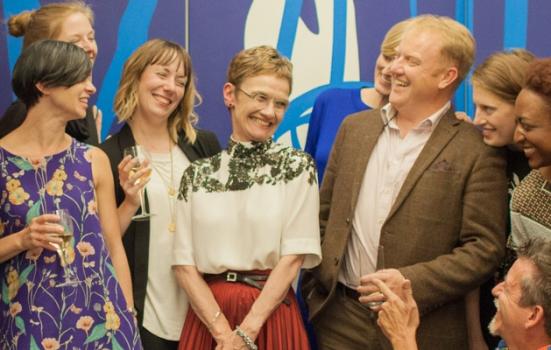 Shay was a fellow student at Bristol University, where we both studied drama and French. After we graduated, she headed to New York to work as a costume designer, initially in theatre and now – very successfully – in films. I headed in the opposite direction, to Paris, to teach at the university and begin postgraduate studies. During this time, I visited Shay in New York and she asked me directly: Why are you pursuing an academic career when you love performance? Her words jolted me. It was as if she had held a mirror up to me and I realised that I had been following my head and not my heart. I pressed the pause button on my research, got a job in the box office of Sadler’s Wells and set out to become the Sue I am, rather than the one that others expected me to be.

I haven’t seen Shay in decades, and she may not remember that conversation (or even me), but her question made me realise that a guru isn’t always the person who gives you advice or answers, but the one who honestly and wisely asks the right questions.

There are many people working in dance who would count Dick as one of their gurus. He is unflaggingly generous in his commitment to nurturing young artists, producers and managers in dance.

When I first worked with him at London Festival Ballet (now English National Ballet) I was only 25 and had very little experience. Dick subtly and kindly mentored me, putting me in charge of the marketing campaigns for the company’s visits to Norwich and Nottingham (my home city) and helping me understand the importance of trust in helping others build their confidence.

Jane was the first Director of Dance at Arts Council England, and a fearless champion for the art form. She is also kind and generous: I recall her lending her Vespa to a dance company I managed in the mid-1980s, Extemporary Dance, because one of our works involved recreating a pastiche of Naples in every theatre we visited, including hanging up washing, cooking spaghetti and riding Jane’s Vespa.

Later, I worked with Jane at the Arts Council and applied to be her successor when she announced her retirement. Jane had no say in the appointment, but late on the night before my final interview, she went into her garden with a torch and found two four-leaf clovers, which she pasted onto a home-made ‘good luck’ card. Her belief in me gave me a real boost and, much to my surprise, I got the job.

I’ve been lucky to have worked with amazing artists, including Emilyn Claid, Lloyd Newson and Nigel Charnock while at Extemporary, and then with artists of all generations at The Place. Whilst I was there, I was in charge of a building project that involved creating new dance studios and a reconfiguration of the historic Drill Hall, the home of The Place since the 1960s. We’d made a lot of changes, particularly to the main entrance area. As you can imagine, I felt pretty nervous on the night of the re-opening since Bob Cohan, the founding Artistic Director of The Place, was going to be there. But Bob immediately told me: “It’s still The Place, Sue.” His words made me realise that he had helped create an organisation with strong enduring values of “quality, enterprise and love,” that were embedded in the building and everyone who worked there.

I’m happiest when working at the middle of a team, and I’ve been lucky to work with amazing colleagues throughout my career whose knowledge, experience, commitment and drive have created a culture that enables others to grow. From my Arts Council days, I count ‘The Dancettes’ (Julia Carruthers, Brendan Keaney and Jeanette Siddall) as life-long friends and mentors, and I know I shall miss the care, dedication and loyalty of the Clore team every day.

It is humbling to precede Hilary Carty as Director of the Clore Leadership Programme, and I’m very proud that she will be leading such a fantastic team through the next phase.

Sue Hoyle was Director of the Clore Leadership Programme from 2008 to 2017. She is now embarking on a portfolio career of research, writing and creative projects.
cloreleadership.org