Financial insecurity plagues the working lives of cultural workers, with the self-employed and freelancers worst affected. But solutions are to be found, so it’s time for the UK to take decisive action, says Clara Paillard. 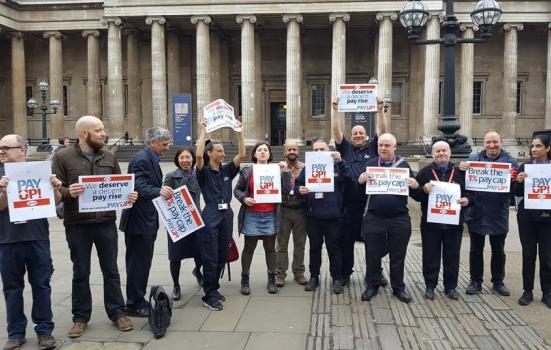 A pay protest at the British Museum in 2017
Photo:

One year ago, I lived in an old flat with no central heating, broken windows, and kitchen and bathroom facilities on the landing. Not to mention mice. As a museum worker on a part-time contract, life can be tough. But far from being an exception, my situation reflected the condition of many workers in the cultural sector: whether they are self-employed musicians, freelance education workers, or front of house staff working for a private contractor. Many in the sector have two jobs, or more: the corridors of the British Museum and Tate are filled with workers who are gallery assistants by day and artists by night.

At times of austerity, precarious conditions have permeated every area of society – and the cultural sector is no different. Initiatives like the Manifesto for Cultural Democracy and Show Culture Some Love suggest there is a growing interest in radical change. But what might this look like in practical terms?

Artists’ livelihoods have long been precarious – unless they are funded by the rich. This is still true today, and funding cuts have made the situation worse. As art has become more accessible through inclusion in the school curriculum in the second half of the twentieth century – and the more recent introduction of free entry to museums and galleries – a growing number of young people are trying to develop their careers in the cultural sector. But aspiring actors and musicians are often expected to work for free, and when they get paid, it is mostly on a self-employed basis. No guaranteed income, no paid holiday or sick pay, and no pension contributions: how can anybody be expected to survive and pay the bills in those conditions? Especially as many of those opportunities are in London, where the cost of housing and transport is exorbitant.

Self-employment and freelance working are also becoming more common in art education. When London Metropolitan University closed the old Cass art school in 2016, moving the institution to a new location, many teachers went on strike alongside students to highlight how the university planned to simply cease its working relationship with many teachers who were self-employed or on fixed-term contracts. An encouraging recent development was the tribunal decision that art educators formerly engaged by the National Gallery had ‘worker’ status and were therefore entitled to benefits, such as holiday pay, that they did not receive. But is there more that can be done?

Some argue that a Universal Basic Income – which would provide all citizens with an income sufficient to live on – is a solution to wider financial insecurity in society. But it could particularly appeal to artists, alleviating their precarious living conditions and allowing them to spend more time on their creative activities. In France, such a system already exists for freelance artists: the ‘Intermittent du Spectacle’ scheme provides an income during periods when they do not receive money from paid work, meaning they can spend time training, rehearsing, writing or creating. People can only register if they can provide evidence of a certain level of paid work in their specialism. This has certainly encouraged a strong cultural sector in France. Attempts to abolish the scheme have been met with strong opposition, including strikes at the famous Avignon Festival.

Fighting the effects of privatisation

Another major contributor to the precarious incomes of workers in the sector is the privatisation of chunks of museum workforces. In recent years, austerity and budget cuts have encouraged institutions such as the National Gallery, the British Museum and Imperial War Museums to outsource functions such as visitor services, security and ticketing to private companies. An unprecedented campaign in 2015, supported by the Public and Commercial Services (PCS) Union, saw other National Gallery workers stage a 111-day strike which  highlighted the way this issue affects the cultural sector.

While privatisation may save money for the institutions, the costs for workers can be high. In each of these cases, privatisation has meant the introduction of more precarious contracts – part-time or fixed-term, or with fewer rights – as well as an increase in the use of zero hours contracts and agency workers. With no guaranteed income, many are forced to take on a second or third job to make ends meet.

Workers can also suffer when a contractor runs into financial difficulty – often leading to even greater instability. The high-profile collapse of Carillion in early 2018 meant that long-serving workers at the British Museum found themselves transferred to 3-month fixed-term contracts, with no rights to challenge or consult on this under the liquidation rules. And they have no control over how their working conditions could change if a contractor is bought out: workers at the Imperial War Museum watched powerlessly when their contractor Shield Guarding went under and was bought by multinational Noonan.

To push back against this worrying trend, trade unions in the sector, like PCS, have developed proposals to introduce minimum standards of employment. These could, for example, include a requirement to pay a living wage, or banning zero hours contracts in museums and galleries. As a minimum, cultural institutions should introduce rights standards in their procurement requirements. Surely, institutions funded from the public purse should not force their workers to survive by claiming benefits.

The very poorest cultural workers are often the cleaners who scrub the marble floors, or the café and shop workers who sell you a latte or the latest exhibition catalogue. Often employed on the minimum wage, many are migrant workers, women, young or elderly, BAME or disabled. Some are homeless or sofa-surfing, others are walking two hours to work to save transport costs. But often, museum objects receive more attention than they do. Introducing a national minimum wage of £10 per hour would help redress the inequalities we see in the sector. Pay equality is not just about breaking the glass ceiling but also looking at the ‘sticky floor’.

Article 27 of the Universal Declaration of Human Rights tells us that “everyone has the right to freely participate in the cultural life of the community, to enjoy the arts and to share in scientific advancement and its benefit”. But that should never be to the detriment of cultural workers’ rights and dignity.

Clara Paillard is President of the Culture Group at the Public and Commercial Services Union.
Tw: @clarapa