How we raised £35k for refugees

When orchestra professionals Tamzin Aitken and Libby Papakyriacou decided to stage a fundraising concert to support the refugee crisis – outside of their normal day jobs – they were overwhelmed by the response. 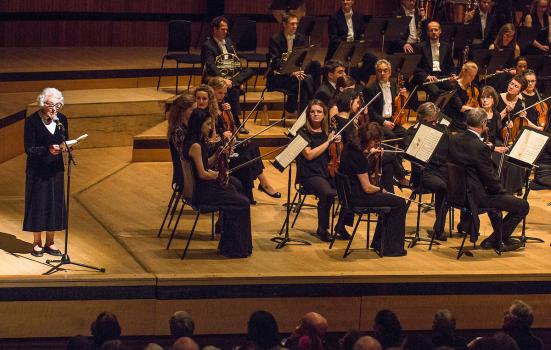 Judith Kerr with Members of the London Philharmonic Orchestra and Friends.
Photo:

A year ago we were discussing our shared sense of powerlessness to contribute in a meaningful way towards the refugee crisis (and the wider political landscape). We came up with the idea to put our professional experience to use to produce a fundraising concert to be performed by the Members of the London Philharmonic Orchestra and Friends.

Our initial research into which charity the concert should support led us to the Refugee Council, a charity which receives a government contribution towards its work with child refugees arriving in the UK alone.

Once we reached the rehearsal period and concert day itself, it became clear that this performance would feel entirely different to anything we usually work on

Having approached the charity to explain our idea, share proposed budgets and schedules and thrash out any potential risks, we were able to go ahead and secure the venue (Royal Festival Hall at Southbank Centre) and firm up a programme and artists. We both felt strongly that a choral work, and specifically Sir Michael Tippett’s ‘A Child of Our Time’, a piece he wrote during World War II in response to the actions around Kristallnacht, would speak most eloquently to the refugee crisis.

Alongside this, we approached Hilary Hahn to perform Mendelssohn’s Violin Concerto. The piece itself was banned under the Nazis (because Mendelssohn was Jewish), and while the music added a sense of innocence and lightness to the evening, this aspect of its history felt an important part of the narrative we wanted to present. It is also a slightly more accessible piece of programming to the Tippett, which we felt was an important tool in engaging an audience who might not usually be familiar with classical music, but who might be enticed to attend in support of the charity.

We were similarly keen to join the dots with the speakers we programmed, and were delighted to be joined not just by Judith Kerr and Lord Alfred Dubs – both of whom came to the UK as child refugees fleeing the Nazi regime – but also by a young Eritrean woman who arrived more recently in the UK as a child refugee and is now a Young Leader with the Refugee Council’s Youth Development Project.

We were overwhelmed by the warmth and generosity we encountered from everyone we approached to be part of the evening – not just the artists we asked to perform, but also colleagues from across the sector who warmly responded to our approaches for in-kind favours, advice and, in some instances, direct financial contributions.

While this perhaps should not have been a surprise given the cause, it was a joyful part of the process to encounter such positivity and a shared will to make use of our professional abilities to make a tangible difference in the world. While the idea to stage the concert came from us, the end-result would not have been possible without the generosity and commitment of everyone we approached.

While we had the full support of the London Philharmonic Orchestra (LPO) management, this project sat entirely outside our day-to-day workload. As the day drew nearer, we became ever more appreciative of how much we usually depend on the trust we have in colleagues across the LPO when producing work on this scale. The well-oiled infrastructure of the organisation provides a real security in delivering our individual roles in a normal capacity. On this project, we were working without this safety net, with a resultant weight of responsibility that was exhilarating but also acutely nerve-wracking.

Once we reached the rehearsal period and concert day itself, it became clear that this performance would feel entirely different to anything we usually work on. Our conductor, Edward Gardner, who had visited the Refugee Council’s Children’s Centre with us a few months prior, made it a priority at rehearsals to address the cause for which we were working.

Maurice Wren, CEO of the Refugee Council, attended to say thank you in person to the numerous performers who were donating their talents to the evening. The lasting impression we had was that, when given the opportunity to engage with an event such as this, our colleagues across the sector were genuinely happy to be able to use their professional abilities and resources to do so.

The night itself was a great success, with over £35,000 raised through sales and donations. One of the biggest positives to emerge from the evening, and one we hadn’t fully anticipated, was the opportunity the evening gave the charity to engage with its existing loyal supporters and a huge number of future prospects.

We were glad to hear that they had been able to have conversations which wouldn’t have been possible without the occasion. The hard work of our PR teams (both Albion Media, working pro bono, and the Refugee Council’s own PR team) meant that journalists from across the mainstream media were able to attend and hear more about the work that the charity does.

How we raised £35k for refugees