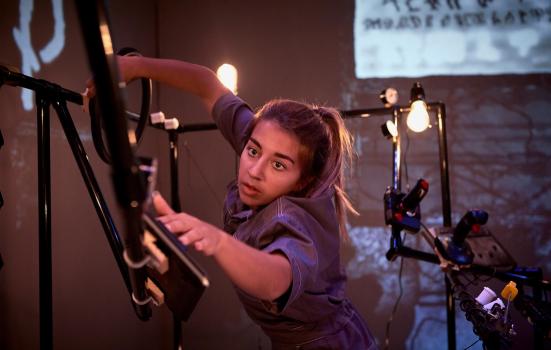 Over a year ago I became preoccupied with solving a problem. As co-Director of a theatre company dedicated to developing young audiences and young talent, I felt we were not truly serving our mission if we couldn’t take theatre into community settings. If young people don’t come to the theatre (and we know there’s lots of valid reasons for that, including some simply not liking the idea of theatre) then we have to take theatre to them. The problem is how.

The appeal of ThickSkin theatre’s work on stage is its highly visual, cinematic style, but this can be very technically demanding to achieve in a theatre, let alone in a community setting. How could we deliver high production values, while touring to spaces of all shapes, sizes and practicalities? How could we deliver the same impact, without diluting the quality? And how, as a small company, could we do this in an affordable way? After a lot of head scratching the team arrived at a solution: virtual reality, and the launch of our MATCHBOX productions.

Our MATCHBOX is a 6m x 6m box made from steel frames and canvas screens. At the centre is a 360° camera which records live action performance and captures any animation and projection we throw at the screens. The world created is immersive and all-consuming. There’s a definite aesthetic crossover with video-gaming, but the story and the presence of live performers roots the work in theatre. This gives us the chance to appeal to a wide range of audiences, including those whose go-to artforms might be cinema, gaming or visual art. After recording the show we present the work through high-spec Oculus Quest headsets, which Oculus have donated to us, allowing us to tour the experience to any venue, anywhere.

The road to recovery

Earlier this year we busied ourselves with preparations for our first MATCHBOX production, PETRICHOR. This work has been created by ThickSkin’s Associate Artistic Director Jonnie Riordan, with co-director Jess Williams and animator Ben Walden. It is a story set in a parallel universe, exploring escape and connection, featuring two performers, an original soundtrack and mixed media. A world where every day is the same and every moment is muted, managed and monochrome. The inhabitants begin to question the order, seeking colour and escape. PETRICHOR explores the hopes and fears of our current and future existence.

As lockdown progressed, we realised that VR could be part of the post-pandemic road to recovery for theatre. Since March, organisations and audiences have been embracing digital with renewed enthusiasm. If digitally curious audiences (and not just young people) are newly embracing technology as a portal for access to culture, then virtual reality can complement rather than replace live performance.

We set about sharing the idea with theatre programmers up and down the UK, discussing how the versatility of VR meant audiences could be offered multiple entry points to the work. As well as safe, socially-distanced ‘performances’ touring to theatres and community spaces around the UK, the work will also be available online. We will tour with a medical-grade cleaning device, which ensures headsets are safe for each new audience. From home, audiences can watch with or without a headset, using a smartphone or tablet. Audiences have the option to attend in-venue or online, and theatres have an opportunity to continue a relationship with their audiences even if it’s not yet viable to fully re-open. That’s why some venues on our PETRICHOR tour will host the work only online, only on-site, or both. It’s a flexible and responsive model, well-suited to these uncertain times.

Not forgetting the original aims for MATCHBOX, every venue has been offered free tickets to reach young people who are currently least engaged with theatre in their local community. Through our Digital Access Fund we will provide mobile data top-ups to some of these young people, to help tackle the digital poverty which has been a barrier to engagement with the arts online during lockdown. We’re also thinking about schools, colleges and anyone studying performing arts who won’t be able to see original or live theatre for some time. For these groups we’re developing a behind-the-scenes documentary and a range of creative tasks to complement the VR experience in classrooms. It’s important to ThickSkin that we use this project to find as many routes back to theatre as possible.

Embarking on our first Theatre-in-VR project has been an exciting adventure. We’ve had to learn a huge amount about the technical opportunities and limitations of creating the work. Having long been one of the digital technologies heralded as being a game changer for theatre, we think VR has an important part to play now in engaging audiences during the coronavirus pandemic. This will be a vital test of how theatre might be delivered safely and innovatively in the short- to medium-term, and a taste of how theatre, and its audiences, may embrace digital in the long-term.