The British Council and the Ukrainian Institute have launched the UK/Ukraine Season of Culture, a new programme designed to support the Ukrainian arts sector.

The season, which has been planned since 2019, marks 30 years of diplomatic relations between the two countries. Amid the ongoing war in Ukraine, its theme is “Future Re-Imagined”.

It will focus on the changing needs and priorities of the Ukrainian arts sector and aim to provide new opportunities for Ukrainian artists. A programme of activities, events, grant-funded projects, residences, talks, films and lectures will take place in the UK, online and in satellite locations.

The season will also support future Ukrainian artistic collaboration through a series of grants worth up to £30,000, based on the results of an open call launched last October.

The season launched last week at Sheffield DocFest with a display of artworks and screenings of Ukrainian documentaries.

Upcoming highlights include Cheltenham Book Festival and the Kyiv Book Arsenal partnering for a special Ukraine Day event celebrating emerging voices in Ukrainian literature; a Ukrainian to English Literary Translation Summer School at the University of East Anglia, bringing together translators and authors; and a programme at the 2022 Huddersfield Contemporary Music Festival focusing on contemporary Ukrainian opera and chamber music.

“While the whole of Ukrainian society is affected by the Russian aggression, artists and creatives are among the most vulnerable groups,” said Volodymyr Sheiko, Director General of the Ukrainian Institute.

“Ukrainian culture is a major target in this war, so it is particularly important to continue building networks and supporting the creative sector.”

While much has been written about the impact of Brexit on the performing arts, Şenay Camgöz shares insights from a new report on the challenges for the visual arts.

UNESCO has reported that 143 culturally significant buildings have been damaged in Ukraine since Russia’s invasion began in February.

The total includes 65 religious sites, 12 museums, 27 historic buildings, 17 buildings for cultural activities, 15 monuments and seven libraries. Damage has occurred across nine regions in Ukraine, mostly in the east of the country.

The global heritage body’s findings form part of its preliminary damage assessment into cultural properties in Ukraine, which it is conducted by cross-checking reported incidents with satellite images.

None of the seven World Heritage Sites in Ukraine appear to have been damaged to date.

Since the Russian invasion of Ukraine, a Kyiv theatre has become a bomb shelter for artists and locals. Its director Alex Borovenskiy has led the creative and humanitarian initiative using Facebook.

The UK’s Cultural Protection Fund is yet to designate funding to Ukraine to support widespread damage to heritage sites caused by Russia’s invasion.

The fund, administered by the British Council and backed by the Foreign Office, has delivered £30m since its inception in 2016 to protect cultural heritage at risk, namely across the Middle East and North and East Africa.

A British Council spokesperson told The Art Newspaper Ukraine was not automatically eligible for the fund, but an exception was made to allow allocation of £60,000 in March, which did not materialise.

In the last financial year, the £2.4m earmarked for grants had been largely spent before Russia’s invasion began in late February. This year’s fund is now open for expressions of interest, but the Ukraine is not listed as one of the fund’s targeted countries on the British Council’s website.

The Cultural Protection Fund did channel £80,000 through a Dutch non-governmental organisation in March, which is coordinating assistance for Ukraine.

The Prince Claus Fund shipped protection materials for works of art and buildings to Ukraine via Poland in March. A second consignment is now being organised.

The support package also received funding from foundations in the USA and Germany.

The Wallace Collection in London is Europe’s best free gallery, according to a study by the Knowledge Academy.

Researchers used data from TripAdvisor, comparing scores from the website’s star rating system for galleries with more than 500 reviews.

A Bayesian average was calculated to give each gallery a score out of 100, based on a weighted average obtained from the number of reviews relating to each star rating.

Eight of the top ten galleries were in the UK, including three other venues in London. The National Gallery was placed fifth, V&A seventh and the British Museum ninth.

Plymouth museum The Box was one of 12 museums to be recognised in this year’s European Museum of the Year Awards (EMYA).

The awards, which were held in Tartu, Estonia, are Europe’s longest running celebration of museums across the continent.

A total of 60 museums were nominated, with The Box one of 12 awarded entries, receiving a special commendation alongside six other museums.

The award’s overarching theme this year was how museums can address local and global issues that impact their communities.

The EMYA Jury described The Box as “a remarkable regional museum with strong ambitions for its cultural, educational and social effects”.

“With outstanding exhibitions and easy access for all, it has created a new cultural asset for its city and region and is an active advocate for the social change it can bring to its communities.”

London-based Czech and Slovak language school Okénko is hosting an online auction of artworks to raise money for Ukraine.

Proceeds will go to help relief efforts in Ukraine, specifically to the People in Need Foundation SOS Ukraine.

Online viewing and bidding will be available from 15 May, with the auction concluding with an in-person exhibition at London’s Czech Embassy on 22 May, which will also feature debates and a creative workshop.

Attendance is free but registration is required on Eventbrite.

When refugees from Ukraine fled into Poland, Ewa Kozik and Bartosz Frackowiak seized the moment to put their arts activism into practice.

Dual registration for hauliers will offer visa-free touring for some, but problems persist for smaller-scale tours and orchestras with specialist equipment.

Sonia Boyce has won the Golden Lion award for Best National Participation at the Venice Biennale, becoming the first Black British woman to do so.

Her winning exhibition Feeling Her Way, focuses on the vocal experimentation of five Black female musicians embodying feelings of power, freedom and vulnerability. The jury said that “in working collaboratively with other black women, [Boyce] unpacks a plenitude of silenced stories.”

Boyce said: “This is momentous, and utterly overwhelming. I want to say thank you to everyone for their support. Their generosity has been beyond my expectations."

“It is also highly significant that an artist who was part of the Black British Art movement of the 1980s has been honoured in this way – thereby bringing this crucial part of British art history into an international spotlight.”

A UNESCO world heritage meeting due to take place in Russia has been postponed indefinitely.

The decision follows pressure from global cultural organisations to pull the meeting in Kazan following the invasion of Ukraine.

The 21 member states of UNESCO’s heritage committee take turns to host the annual meeting, chairing the edition they host. There are currently no plans to relocate the 45th edition.

UNESCO estimated 53 cultural buildings in Ukraine had been destroyed by Russian attacks by the end of March. The number is now thought to be closer to 100.

Brexit has edged the UK's art trade out of the global top tier. It could mean more exposure for artists domestically.

A decision to replace a British production of Phantom of the Opera with a Chinese one "speaks volumes about the impact of the Government’s approach to supporting touring creatives".

The statement from DCMS Committee Chair Julian Knight comes after Jessica Koravos, President of the Really Useful Group, told MPs it was "more straightforward and less expensive" to tour the Chinese show in the EU.

Knight said this exemplifies the damage done to arts touring by Brexit.

"The mask has well and truly slipped on the true extent of the problems faced by the UK arts sector.

"The current EU visa arrangements are proving economically disastrous for our cultural industries by forcing them to play second fiddle to their international competitors, while having a hugely detrimental effect on the ability of the UK to exercise soft power by promoting Britain abroad post-Brexit.”

UK tours in EU ‘too expensive’

Theatre company Really Useful Group has brought in a production of The Phantom of the Opera from China to tour the EU, because Brexit red tape made it “too expensive” to use a British one, a DCMS Committee has heard.

Really Useful Group promotes Andrew Lloyd Webber’s shows around the world. Its president, Jessica Koravos, told the committee she “would not dream of sending a UK production into Europe” under current circumstances.

She said it was “more straightforward and less expensive” to bring in a production from China 5,000 miles away.

DCMS Chair Julian Knight said the situation “means that the mask has well and truly slipped on the true extent of the problems faced by the UK arts sector”.

“That one of the all-time great British musical impresarios would not now dream of taking a production rich in West End heritage into the EU from Britain speaks volumes about the impact of the government’s approach to supporting touring creatives.

“The current EU visa arrangements are proving economically disastrous for our cultural industries by forcing them to play second fiddle to their international competitors.”

A £250,000 fund aimed at supporting touring musicians has been opened by Help Musicians.

Musicians can apply for grants up to £5,000 to put towards touring expenses and international administration fees such as visas.

Help Musicians says it will support the advice service, previously available to Incorporated Society of Musicians and The Musicians’ Union members, for the next 18 months.

“My plea to the government is to use the 18 months of cover that this service provides to negotiate and put in place all that is needed to ensure friction-free touring for musicians in the EU,” Chief Executive James Ainscough said.

Museum and theatre damaged in Ukraine

A theatre sheltering over 1,000 people has been bombed in the southern Ukrainian city of Mariupol.

Satellite pictures show the word "children" had been marked in large letters outside the theatre.

The majority seeking refuge inside are thought to be children and elderly people.

In a video address, Ukraine's President Volodymyr Zelensky said Russia deliberately targeted the theatre: "Our hearts are broken by what Russia is doing to our people. To our Mariupol."

Earlier this week, a museum in the northern Ukrainian city of Chernihiv was severely damaged by Russian strikes.

The Tarnovski Chernihiv Regional Historical Museum, also home to a regional youth library, is one of Ukraine’s oldest historical museums.

The library was almost completing destroyed by bombing, according to museum director Serhiy Laevsky.

Writing on Facebook, he said the main museum is in “full order”. Its collection devoted to military history was moved to a secure location after its building was also damaged.

The museum survived shelling during the First and Second World Wars. 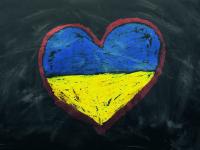 Here are five things you can do now to help arts workers from Ukraine (that aren't donating money).

A series of events by Russian ballets have been cancelled following Russia’s invasion of Ukraine.

Performances by the Russian State Ballet of Siberia were stopped at the Royal & Derngate theatre in Northampton, Wolverhampton Grand Theatre and The New Theatre Peterborough.

The Ambassador Theatre Group has cancelled the same tour, scheduled for The Bristol Hippodrome and Edinburgh Playhouse.

Speaking on Twitter, Culture Secretary Nadine Dorries urged other features to “take action and stand by the people of Ukraine”.

“We can’t allow representatives of the Russian state to continue performing”.