Do better in order to be better

How can the sector better support its Black, Asian and ethnically diverse creative practitioners and workforce? Eclipse Theatre’s Amanda Huxtable shares insights from their report ‘How to plant magic beans AND build rockets to the moon…’ 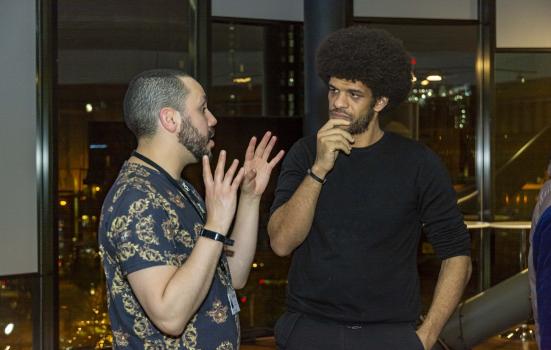 When I joined Eclipse almost a year ago to the day, no one could have predicted the impact of Covid-19 and our present position within the cultural sector. Plans have been put on hold, torn up and started again. More than 7 months later we are now tentatively returning to our stages - and more importantly our audiences.

This is a time like no other. For some of us, the impact of Covid-19 on our health, incomes and finances, coupled with racial injustice crises are intertwining at the intersection of our lives.

To be a Black, Asian or ethnically diverse artist in the United Kingdom based in the North of England in the Covid-19 era is to face the reality of an already challenged existence.

Our three-year development programme ‘Slate: Black. Arts. World’ was designed with these artists in mind. From an initial call out asking Black, Asian and ethnically diverse artists about their experiences in the North, patterns began to emerge, and from this six key challenges were identified:

Eclipse then took action  to address these concerns. We created a programme of support with a consortium of Arts Council England National Portfolio Organisations, who worked with six Black arts professionals as Enablers and supported Black artists to access a range of opportunities, including roundtable events, workshops, residencies, retreats, production support, ‘go-see’ bursaries and commissions – a rich, diverse suite of initiatives to tackle head on the challenges identified by the Black artist cohort.

The consortium included theatre venues (such as Hull Truck, ARC Stockton and York Theatre Royal), national and international touring theatre companies (including Pilot Theatre and Forced Entertainment). Venues were able to challenge their own programming patterns and take up the opportunity to build relationships with Eclipse and artists from across the North of England.

Whilst the consortium has since grown, these organisations were some of the first of our partnerships to acknowledge that these artists faced particular and distinctive challenges within the cultural landscape. They were also quick to commit to taking collective action.

We gave time to the development of a full process of commissioning new work from R&D stages through to final production. These productions are now a part of our lexicon where they may well have been lost to us all before. Members of the consortium have also shared the mutual benefits gained from supporting artists: it has been an enriching process for both artists and consortium members. Slate: Black. Arts. World drew on huge reserves of strength, honesty and commitment on both sides, and our ambition has paid dividends -  it’s reached over 5,000 artists.

The power of networks

At a time when many Black artists felt their existence, access and opportunity denied, we believe the programme may have helped to ease some of the pressures of daily experience.

Quite early in the consultation process Black artists told us of that a lack of established networks to share experiences had left them feeling isolated and unsupported. Throughout the pandemic the importance of these networks has become astonishingly clear: we have never needed each other more and we’re pleased to have created the conditions to build a network of support and potential collaboration between artists together and in their own right.

Another challenge that became clear in the early stages of our thinking was that for many, entering into the cultural industry, as well as navigating through it, remained a mystery – especially for those coming from already marginalised backgrounds. Whilst we launched in Leeds, we soon took the programme to Sheffield, Newcastle, Hull, Manchester and Liverpool, where artists met individually, with the Enablers and collectively to build their work and use the platform to engage with audiences. The artists reached 46,000 people, raising awareness of their work, building networks and knowledge of the sector and each other.

The 3 years of work that went into Slate: Black. Arts. World has not been easy: we’ve learned a great deal along the way, and we now have a mountain of recommendations to move forward with. Change does not travel in an easy, straight line and we still have some way to go.

Eclipse’s commitment to the many communities we belong to and serve is to challenge our industry to do better in order to be better. The dismantling of the power structures and dynamics within our industry that overtly and discreetly discriminate must be our core focus for us to rebuild together in hope and confidence.

Amanda Huxtable is Artistic Director/CEO of Eclipse Theatre. Eclipse is a national touring company based in the North of England, which exists to support and champion Black British African and Caribbean people and all who work within the cultural sector who are also marginalised for their race.