Julie Bécaud, now a researcher at the Scottish Maritime Museum, explains her first steps into the arts in the UK. 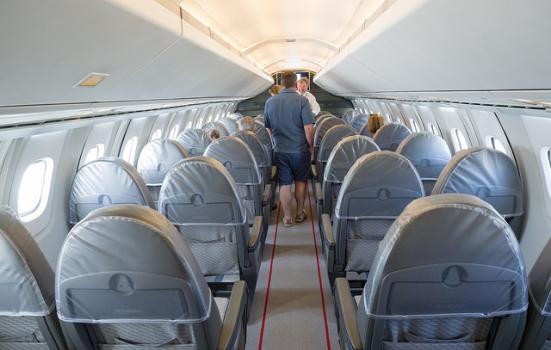 Interior of the Concorde, at the Brooklands Museum
Photo:

As a French student, I was full of hopes when I decided to build my career in the cultural sector in the United Kingdom.

What I did not know was that my career would be threatened by Brexit and that my bunch of diplomas, my enthusiasm and my French smile would not be enough to find a job.

It took me time to understand that my background, my experiences and my culture are an amazing part of who I am

At the end of my Masters degree, I began looking for a job and this is where I faced my first issue. I needed a job to get experience but needed experience to get a job. And despite my previous experience as a volunteer in a gallery, I realised I wouldn’t get any further without doing an internship in the UK.

This is where I faced my second issue: unpaid internships. In France, back in 2014, a new law was passed that gave interns more benefits such as higher salaries, travel cards and meal vouchers. This isn’t the case for many UK internships. Fortunately, I did finally find a paid internship in London which allowed me to live and enjoy the city, and volunteer in museums during my free time.

My work with Brooklands Museum

In May 2016, I got in touch with the Brooklands Museum in Surrey, which was the birthplace of British motorsport and aviation. The marketing team was looking for a French-speaking person who could help build a marketing strategy to develop the museum’s French-speaking audience – both from France and those who live in the UK.

During our first meeting in London, we set up a strategic plan with the different targets and key locations. Our priority was to identify the reasons why French-speaking people would like to go and see the museum.

We had to think strategically about the location of touristic places. As the museum is located in Surrey, it is very close to London, the Eurostar, airports, ferry stations and train stations. We also thought about contacting French schools, French communities, organisations and any bloggers or influential people that could help us advertise.

It was great to meet professionals in the UK and hear their views of the sector. I had always been told that it was a very competitive area to work in, but if you work hard and are curious, you can succeed. It was incredibly rewarding to use all the knowledge I had gained at university and put my skills to use in concrete projects. The support I got from the people I worked with was intensely gratifying.

The marketing officer told me that, a few years ago, he went to Le Mans by ferry and when he got off at Caen, he noticed there was a tourist office where people were sitting waiting to take the ferry to England. He thought then how important it was to get the museum’s French leaflet onto the sales desk inside the tourist office so French visitors could pick it up and see how close the museum is to London and what a fantastic day out it has to offer.

I believe it is very important for marketing officers to widen their strategies and employ international individuals because we can translate any leaflets, documents or information on their website. We also know the key locations and how to catch the eye of our audience.

Make your double culture an asset

When I applied for jobs a year ago, I believed that I had to show the recruiter I could speak English and fit into a British environment like any other native. I almost forgot where I came from! It took me time to understand that my background, my experiences and my culture are an amazing part of who I am, and that I could bring these to my work.

We should never stop claiming that diversity is a richness, especially in these unsettled times. I have always admired the principle of equal opportunity in the UK, and I wanted to push my culture away as I thought this would make it easier for me to adapt and find a job. Yet, I have met many people during my internships who are from all over the world. We all helped to create and develop projects, brought our knowledge and skills, and learned from inspiring people in a stimulating work environment.

Thus, having multiple cultures should never be hidden but on the contrary, put forward.

Julie Bécaud is Social Media Manager for the International National Trusts Organisation’s Sustainable Farms Program and a researcher for the Scottish Maritime Museum.

This article was originally published in April 2017 by Creative Choices.