Without creative thinking, society will sleepwalk into a climate disaster. The arts have a crucial role to play in inspiring, challenging and provoking us into action, says Judith Knight. 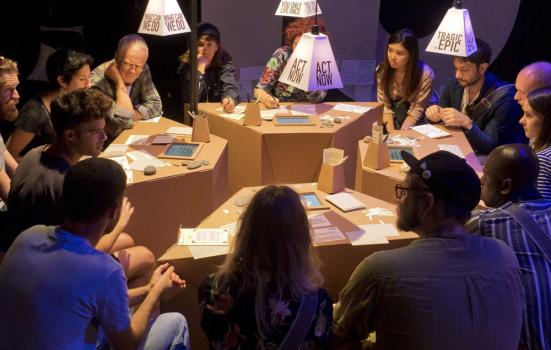 Metis, an interactive installation at the Barbican, London
Photo:

The idea for Season for Change came from a throwaway remark during a 2016 panel discussion about the environment as part of What Next, a movement bringing together arts and cultural organisations to champion and strengthen the role of art and culture in our society. The panel was considering what the arts could do about the environment crisis: how to create work and tour more sustainably, and how to produce and present projects that raise awareness and inspire action.

We were thrilled by the response that demonstrated huge national concern about the environment, and the willingness to use creativity to do something about it

Artsadmin and Julie’s Bicycle have long held the belief that the arts have an important role to play in stopping us sleepwalking into climate disaster. Recognising the many organisations that engage with this issue, the throwaway remark was along the lines of how great it would be if every arts organisation in the country presented a project on the issue.

That could be a piece of theatre, an opera, a performance art project, a children’s choir, a visual arts exhibition, a site-specific project – small, large, indoor, outdoor, in every conceivable artform and with every type of audience.

Together with Julie’s Bicycle and Battersea Arts Centre, we put our combined heads together to make it happen, contacting people up and down the country to engage them in this ambitious and crucial idea. In addition to this, we planned one large-scale national project to take place all over the country to give real profile and visibility.

A period of frantic joint activity followed – meetings, talks, funding applications, phone calls, emails, Skype conversations. The idea was met with enthusiasm from artists and arts organisations, but sadly funders didn’t seem to find it quite so compelling and we had to go ahead without the funding.

The 2018 Season for Change ran from June to December, ending at the same time as the COP24 climate talks in Katowice, Poland. The programme involved 76 venues, 68 organisations and 119 events nationwide, all linked together by the Season for Change website.

Activities ranged from an exhibition of new works by artists of colour responding to the theme of biodiversity, racial justice and environmental justice, generated through an artist residency on the ONCA Barge in Brighton, to the National Theatre’s day for arts professionals, from the Festival of Thrift in Redcar to Invisible Dust’s ‘Under her Eye’ at the British Library; and our own new commission by performing arts company METIS, an interactive installation at the Barbican in London where audiences imagined alternative, perhaps greener, futures.

Despite running Season for Change on an unfunded shoestring, we were thrilled by the response that demonstrated huge national concern about the environment, and the willingness to use creativity to do something about it. It raised awareness of the COP24 talks in Poland, and seemed to tune in with other conversations about arts and the environment.

In an interview for BBC Radio 4’s Costing the Earth, Zoë Svendsen, Artistic Director of METIS, quoted from Amitav Ghosh’s book The Great Derangement, about how important creative and imaginative thinking around climate change is: “When future generations look back upon the Great Derangement, they will certainly blame the leaders and politicians of this time for their failure to address the climate crisis. But they may well hold artists and writers to be equally culpable – for the imagining of possibilities is not, after all, the job of politicians and bureaucrats.”

As for the future, Julie’s Bicycle will continue its crucial work on sustainability within the arts and cultural sector, with projects such as the Creative Climate Leadership course, next running in October.

At Artsadmin, we will continue to work with Imagine 2020, a group of European festivals and venues funded through Creative Europe to deliver arts projects on the environment, including our biennial festival 2 Degrees. Many organisations have asked for the Season for Change to continue, and plans for this are already afoot.

All this comes from a belief that if we cannot imagine a better future, we will never achieve one. We need artists to help us do that, and inspire, challenge and provoke us into action. Artists, and all of us working in the arts, must play our part in combating the devastating effects of climate change. Despite all the other many challenges for society, this has to take priority. There is simply nothing more important.

Can we any longer justify our carbon footprint?
Imagining a better future