Can we any longer justify our carbon footprint?

After a lifetime spent working in the arts across the world, Judith Knight considers the dilemma of meeting the demands of the climate emergency while retaining international collaborations. 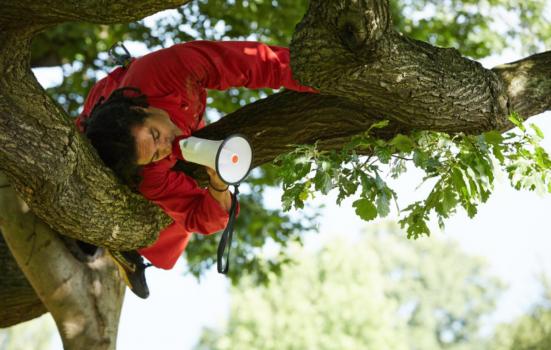 It may seem an insensitive time to write an article about the response of the arts to climate change. If I was still running an arts organisation, I might put my head in my hands and say: “I’m dealing with Covid, I’m dealing with Brexit, how the hell am I supposed to deal with the climate emergency as well?”

But of course, the pandemic and the climate emergency are inextricably linked – Ian McEwan recently called Covid a “mass tutorial” about climate change. As for Brexit and the catastrophic damage it is doing to the country and to the arts, words (mostly swear words) fail me. Although it’s not what this article is about, it’s very much part of the picture of our international relationships.

No excuse for ignorance

I read David Wallace-Wells’ book ‘The Uninhabitable Earth’ which opens with the line: “It is worse, much worse, than you think. The slowness of climate change is a fairy tale, perhaps as pernicious as the one that says it’s not happening at all.” I was shocked to read that one-third of the carbon in the atmosphere had been emitted since I founded Artsadmin back in 1979. This wasn’t a time of ignorance about the climate emergency; this was when we knew. As Wallace-Wells puts it, “we have now engineered as much ruin knowingly as we ever managed in ignorance”.

I left Artsadmin in July 2019 after 40 amazing years working with extraordinary artists. Many of the projects we produced focussed on the environment, inspiring artists such as Ackroyd and Harvey, Platform, Michael Pinsky, Encounters, Amy Sharrocks, Rosemary Lee, Metis and Clare Patey. Through a long-term Creative Europe partnership Imagine 2020 (now ACT), we produced the 2 Degrees Festival. We instigated the Season for Change with Julie’s Bicycle, now finally underway in May/June 2021 after Covid delays. We were early signatories to Culture Declares Emergency, promising to tell the truth, commit to justice, and work towards net zero carbon emissions by 2025. Thanks to the brilliant Julie’s Bicycle there’s huge progress on reducing the carbon footprint in our buildings.

But what about travel?

What does reducing emissions mean for artists fulfilling international, performances, residences, festivals and collaborations? What does it mean for the breath of fresh air, the diversity and the knowledge that international collaboration brings? Is it unthinkable that we stop that – or at least slow it down?

I realise how privileged I and most of my generation have been to work all over the world. But now, with the scientists saying we have only 10 years to fix this crisis, can we continue like this? However beautiful the project, however challenging, life-changing, inclusive, engaging or urgent, can we still fly around the world to create and tour it? And what about the international festival merry-go-round of curators, promoters and festival directors who meet up abroad to select their international programmes? Can we justify our carbon footprint, even if it is lower than that of other sectors? Can we even stand on the lower slopes of the moral high ground if we don’t change our ways of working? Even suggesting this is a bit like the USA and Europe telling the least-polluting continents of Africa and Asia to stop buying cars and fridges – “We’ve had our carbon emitting luxuries for years, but they’re not for you”. After four decades of getting on and off planes, I can already hear the response from the younger artists and producers if I suggested they can’t do as I did. Fair enough, but we can and must adapt. Many have revised their touring plans, and reduced their air travel. French choreographer Jerome Bel has committed not to fly at all, as has director Katie Mitchell.

A position of choice

What does that mean for international relations and creativity, especially with the calamity that is Brexit? I fear a reduction in international travelling would be a cultural death sentence for the UK, making it ever more isolated and inward-looking. It could also be catastrophic for artists who earn a pittance here and would forego higher earnings from countries who fund the arts more generously. Who am I – a retired old ‘has-been’– to suggest young artists should curtail, possibly ruin, their emergent careers, by staying put, when my generation has caused the mess we’re in?

And it’s not just a generational thing. Mexican actor and writer Lázaro Gabino Rodríguez recently wrote an open letter to Jerome Bel applauding his decision while pointing out Bel’s privileged position – in a country where arts funding is generous, a continent where railway links are extensive, having choice – quite unlike that of artists in Mexico who rely on international work to reach an audience and earn a living. Rodríguez wrote: “To be honest, I find it a bit cheap that those who ate more meat, who lived from feast to feast, whom we saw licking their fingers for years, now come and tell us that we should all stop eating meat… equally.” Their dialogue continues.

It’s complicated, of course it is. But there are innovative solutions and compromises. LIFT has just announced its really exciting series of commissions for Concept Touring where the idea, process, and work travel but the artist does not. Dancer Rita Marcalo shares her artwork with other dancers all over the world, “dancing as if trying not to own the earth”. Station House Opera has, for many years, been making work across the world by bringing actors on ‘stage’ together online, creating, rehearsing and performing a show without ever meeting in real life. Now Zoom has entered all our lives and lexicon, the possibilities are endless.

The arts have the power to lead us away from the ‘same old’ to a ‘new normal’. We need them - and our international relationships - more than ever. Above all we need to leave a sustainable future for our children and grandchildren. It’ll take all our collective ingenuity to achieve it all. But I still believe we can.

Judith Knight is the Founder and former Artistic Director of Artsadmin

Can we any longer justify our carbon footprint?
Imagining a better future