Performing in the public realm

Alison Fordham explains how IF: Milton Keynes International Festival’s programme of outdoor events is a key audience development and placemaking tool for the town. 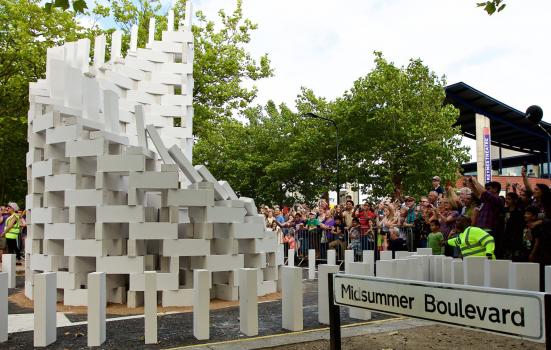 Station House Opera’s Dominoes in the main boulevard in 2016
Photo:

Tasked by Arts Council England to raise the artistic profile of Milton Keynes as part of a major placemaking strategy, IF: Milton Keynes International Festival was established in 2010 and there has been an edition every two years since.

Ambitious in its scale and programme, the festival specifically set out to reach as wide an audience as possible, using the public realm, by presenting events in boulevards, parks, empty shops, public squares and shopping centres. In order to reach the many diverse communities that make up Milton Keynes, it was essential that it engaged with audiences beyond traditional arts attenders.

These were interesting times for The Stables, which shaped the festival’s plans. We took on the producing role, supplementing our own small team with freelance specialists in outdoor arts and major event production as well as brand development, marketing and communications.

Back in 2009, tasked with marketing a festival that as yet had no name or identity, our first challenge was to create a brand that reflected a high-quality event that presented both free and ticketed work in non-conventional places. Working with creative agency Altogether, we opted for vivid colours – fuchsia pink and a palette of bright, strong shades. We used bold images and upbeat slogans that began with ‘IF’. We definitely avoided artspeak.

This festival had to look like it would be fun, appealing, inclusive and accessible as well as tip-top professional. We knew that to develop audiences we had to build high levels of trust and confidence through the quality of the programme and the strength of the branding.

Festival-goers tell us they love the brand design so we have retained the fuchsia pink as an anchor for each festival, helping us to keep those hard-won audience relationships as we introduce more challenging work into the programme, such as Dries Verhoeven’s Phobiarama, featuring this July.

We door-drop the little pink pocket guide right across the city, with a special focus on postcode areas that show up as low in the arts-attending stakes. We work with high-profile partners and local employers to extend our reach and access community and special interest groups at a very localised level through channels including parish magazines and social media pages or blogs.

Festival Facebook event pages give us a good sense of the pick-up on free events in advance, with the number of people expressing an interest in attending being a good indicator of final numbers. Although the weather can be a major factor in the process, particularly when no or little financial commitment has been made by attenders and it’s blowing a gale outside.

If you’ve ever tried to do a survey at an outdoor event at 11pm on a Saturday night, you’ll know that gathering information from audiences at non-ticketed free events is no mean feat. Despite this, from small samples of postcard surveys, street team interviews and post-event online surveys we have established that in comparison to The Stables, audiences for the free outdoor events – and events generally – are more diverse, family-oriented, relatively young and with a higher propensity to live in social housing and be claiming a benefit.

People at these events have told us that their motivations to attend have been a quest for something different, something free and an event for the whole family.

We don’t programme free outdoor work to create ticket-buyers and it is near impossible to track the crossover between attenders at free and ticketed events. However, The Stables’ audience tracking shows that festival-goers do become regular arts attenders. In 2010 some 80% of festival ticket purchasers were new to The Stables database and the venue took the opportunity to market its venue programme to this new audience.

Since then, those first-time purchasers have gone on to spend £50,000 on venue tickets and the total to the end of 2017 spent by these and subsequent first-time festival ticket purchasers at The Stables was over £112,000. In times of diminishing subsidies, this has translated into generating a younger, more diverse audience of regular venue attenders.

What we would still like to understand – and what we might be able to tell you in 2020 – is how many of the people engaging with free festival events subsequently purchased tickets for the festival or for the venue and what that value is to the organisation.

Capacity management is sometimes an issue for outdoor work, so for the second festival in 2012 we introduced minimally priced ticketing for the large-scale opening night event, Carabosse’s Fire Gardens. This year we are ticketing some free events for the first time, which allows for crossover analysis with paid-for outdoor events, other areas of the programme and the venue.

The festival has gone from engaging an audience of 90,000 in 2010 to 500,000, four editions later in 2016. Having established the festival, built the brand and reputation, and heading into the fifth edition this July, we know that outdoor events are important, and that the balance of free and paid-for events works on a number of levels – not least being able to create an extensive programme. Be under no illusions though, it’s not an easy balance to retain.

Ultimately, we want audiences to feel part of a collective experience, whether they’ve forked out for a stonking Eliza Carthy gig in The Spiegeltent or are out in the street with thousands of others watching the free Sarruga parade of Catalan super-sized insects.

Performing in the public realm