A challenging but manageable journey

Male prisoners at risk of suicide or self-harm may be apprehensive about signing up for a theatre project, but some finish Geese Theatre Company’s five-day course giddy with pride. Louise Heywood shares the story. 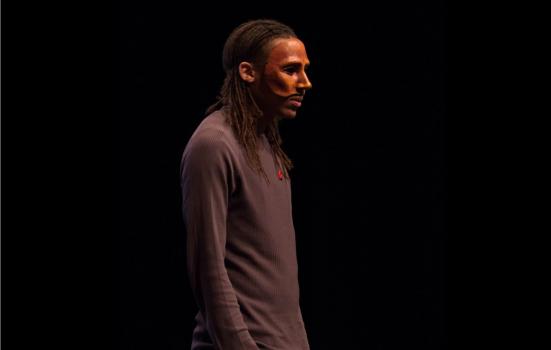 Geese Theatre Company facilitates workshops and staff training in prisons, secure mental health settings and in other criminal justice and social welfare contexts throughout the UK. ‘Journeyman’ is a five-day project with adult male prisoners deemed to be at risk of self-harm or suicide, delivered in partnership with the Safer Custody teams in prisons. First delivered last year, and funded by the National Offender Management Service, it focusses on connecting with others, letting go of negative beliefs, goal-setting and developing new skills.

Promoting a theatre-based intervention for prisoners who are struggling with their sentence or their mental health is not an easy sell. Although the men who sign up do so voluntarily, it’s easy to imagine the anxiety associated with unfamiliar surroundings, people they’ve never met, and doing role-play. However, for some, that level of discomfort is multiplied significantly by clinical anxiety, depression, personality disorder and addiction.

Although the men who sign up do so voluntarily, it’s easy to imagine the anxiety associated with unfamiliar surroundings, people they’ve never met, and doing role-play

It may also be heightened by shame connected to offending and to adverse and abusive childhood experiences, often unacknowledged and unprocessed. The likelihood of this anxiety being manifested as resistance or disengagement is pretty high if you get off on the wrong foot.

It is critical that our practitioners build rapport with the group quickly and they do so by using active exercises designed to energise, focus and build trust. They work quickly, with energy and humour, they listen actively and they give plenty of positive reinforcement. They use exercises that allow participants to share only the information they choose to at this stage, with the goal of creating a safe space in which they are more than just an offender.

Involvement in active, problem-solving exercises not only allows participants to develop transferable skills, but it can create a personal shift in energy and focus. Participants move from a static state where fears around exposure and humiliation have an opportunity to overwhelm, to an active state where they are fully physically and mentally engaged in a task.

Responding to a scene

One of our practitioners performs a short, silent scene: a man, who is bored and frustrated, receives a letter, reads it and appears upset and angry. He screws up the letter, goes to make a cup of tea then decides on a beer instead. He sits ruminating. He gets his phone out, hesitates, then sends a text. He is now energised and drinks quickly. He starts to look confident and motivated. He leaves.

The scene is then replayed and at various points the group are asked to explore what might be happening, what the character might be thinking and feeling and what links there might be between his internal world and his offending.

This introduction of a cognitive behavioural approach is easily digestible because the example is immediate and accessible. The group take ownership of the character by providing detail that mirrors their own experiences without, at this stage, having to own them. Working at ‘one step removed’ provides an emotional safety net and creates a bridge into personal-level work for those who are ready for it, and a vehicle for exploring behaviour with those who are not.

The group question our character from the initial scene. He responds using a number of masks with distinctive motifs such as ‘the joker’, ‘the good guy’, ‘the target’, then lifts his mask to reveal a more vulnerable side. He talks about his fear of discussing his feelings and of appearing weak. He shares his hopes about having a normal life and his doubts about his ability to achieve this. Participants start to give him advice, spontaneously.

We then assist the participants in creating their own scenes, in which they actively rehearse solutions to issues they know they struggle with, such as the discomfort of asking for help or dealing with old associates.

Later in the week, the practitioners prepare an individual piece of work for each participant. It may be a straightforward skills practice role-play, it may require a man to confront an empty chair representing ‘old me’, it may involve him creating an image of the person he wants to be. It has to be a challenge but manageable. The response to success is palpable. Some are relieved, some are surprised and some are giddy with pride.

As the project finishes, there is the sense of an ending and we are careful to mark this by asking the group to consider their journey throughout the project, what their next challenge will be and what they will do to deal with feelings associated with transition. And then there is cake.

One Journeyman participant said: “I had eight years in mental health with nothing that helped. Geese gave me techniques to help me help myself…”