Measuring the impact of dance

The debate about how to evaluate arts in health projects is being furthered by a new dance programme for people with Parkinson’s disease, says Sara Houston. 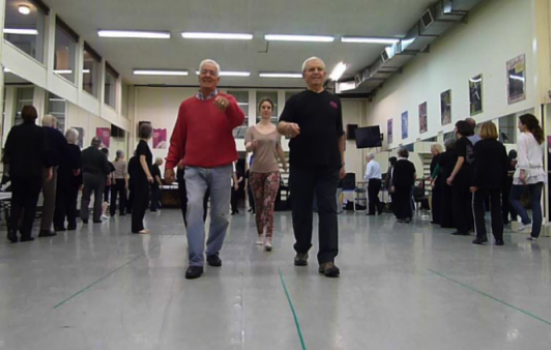 There has been growing interest among community dance artists to develop specialist knowledge and understanding in order to work with specific populations. People Dancing has responded by helping set up specialist interest networks to support dance artists and the people they work with. One of these emerging networks aims to develop and nurture specialist work for people with Parkinson’s disease. Coming at the request of several independent dance artists and organisations working in this area, the network has allowed sharing of best practice and mentoring, as well as giving each artist the sense that they are part of a wider community.

Parkinson’s is a common neurodegenerative condition. It primarily affects movement, slowing it down and causing rigidity in muscles. It provokes tremor and postural instability. Far from being fazed by the possible challenges that dancing might present, many people with Parkinson’s have embraced dancing as their exercise of choice.

If using qualitative data from interviews, it is important to be able to talk to people several times to start to build up themes so that results do not rest on anecdotes

The growing popularity of dancing among people with Parkinson’s was sparked by the Brooklyn Parkinson Group, a mutual support group of people with Parkinson’s in New York. In 2001 the group approached the Mark Morris Dance Group (MMDG) and asked whether it would give them regular dance sessions. Together MMDG and Brooklyn Parkinson Group established a regular and increasingly popular dance programme. In fact, the programme became so successful that MMDG began training dance artists to facilitate dance for Parkinson’s sessions and held workshops wherever the company toured. It was a workshop in the UK in 2008 that fuelled the desire for a UK network.

Dance for Parkinson’s is allied with arts and health practices, where artists work with people who have particular health conditions or within specific health settings. Arts and health practices have come under scrutiny for the impact they might have on the participants’ health and wellbeing. There’s a common assumption that they might be therapeutic for those who take part, despite many projects focusing on artistic engagement rather than therapy. Research into the experience of engaging through the arts, and the impact that it might have on people, helps to either verify or challenge those assumptions, as well as helping to better understand the individual experiences people have.

I started researching dance for Parkinson’s by examining a 12-week pilot project run by English National Ballet. Together with Ashley McGill, we measured changes to balance, stability and posture, observed movement qualities, participant interaction and analysed the value of attending. The small study suggested that balance and stability had improved and that participants were able to move more fluidly while dancing. The class was also highly valued as a cultural activity, as a focus for socialising and as a source of mutual support. In addition, the results suggested that participants were using movement capability that they already had but had not necessarily had the confidence to use, or realised that they could use.

Scrutinising the impact of dance on people with Parkinson’s is not easy. The condition fluctuates hourly, medications prove difficult to manage and lose potency over time. Stress can aggravate symptoms and the condition gets progressively worse. All these variables and contextual factors make it difficult for anyone trying to measure impact objectively. In addition, when working with statistics, small groups, as most arts groups tend to be, do not generate enough data for generalisations. If using qualitative data from interviews, it is important to be able to talk to people several times to build up themes so that results do not rest on anecdotes. Research, in other words, may help form more knowledge and understanding about the practice or project, but it is important to acknowledge that research needs time to develop and question. It cannot stop at one study.

The Dance for Parkinson’s pilot research has led to a much longer, bigger project allowing us to delve deeper into what we think we found from the pilot. What if we tested balance, stability, posture and confidence differently? Would there be a similar result? What if we tested people with Parkinson’s who did not dance? Might that change what we thought was affected by the dancing? What if we kept on building a bank of interviews, diaries and focus group responses? Are there additional themes that come up? Does the method of delivery affect the outcomes?

The results of the second three-year study will be out soon and will contribute, irrespective of positive or negative findings, to a greater knowledge and understanding of the practice of dance in relation to Parkinson’s. In tandem, emboldened by the formation of the network, international collaborations are being forged between dance artists, and we are all working together (researchers, teachers and dancers) to establish best practice in this emerging area of work.

Sara Houston is Principal Lecturer and National Teaching Fellow at the Department of Dance, University of Roehampton, London.
www.roehampton.ac.uk/staff/Sara-Houston
www.roehamptondance.com/parkinsons

We’ve seen a steady increase in the body of research linking health and wellbeing benefits to arts and cultural engagement on CultureCase, especially in relation to people living with long-term conditions. Sara’s work with people with Parkinson’s disease is a good example of how the arts can collaborate with the healthcare system to provide alternate therapeutic activities. Sara rightly offers a caution on drawing large conclusions from smaller studies. Studies, such as Dance for Parkinson’s, are important as they provide the foundations for further investigation. I very much hope that it will encourage research funding bodies to commission a larger-scale exploration of this area.

This article is a summary of research prepared for CultureCase, a new resource from King’s College London to provide the sector with access to academic standard research. The summary of the academic paper is available on CultureCase.

In the 1980's, when I was not yet 30, and a new teacher and performer in the UK, I had a student who must have been in her mid '60s-'70s even, fully grey-haired, fragile looking, ex-ballet student, who came to my Indian dance classes. Draped messily in a sari for class, she asked to please be allowed to remain at the back of the class and be pretty much ignored, even if she struggled. I had the habit of walking through the class and on one day, I noticed her foot was bleeding and I had to draw her aside. "I cut myself with my other foot, but that's OK, I don't feel it," she explained simply, pleading to not draw any more attention to her. A handful of months later, she unusually hung back after class, smiling nervously, waiting for me to spot her. She had gone for her regular medical review, she said, for some neurological condition, she wanted me to know that her doctors were astounded that she now actually had beginnings of definite sensation down her leg, and the numbness and prickliness had reduced, and now she knows if she cuts her foot, she reported. The next words blew my mind: "Thank you, it is the dance classes with you that have been my only 'different' treatment the last few months; my doctors didn't believe it. I just wanted you to know." I lost track of her as I moved abroad shortly after, but such anecdotes remain life-affirming, undoubtedly -- like poignant short stories. Yet, statistically speaking, such anecdotes or 'sporadic occurrences' don't mean much as even a 'small sample' is one where n=30 observations/participants/specimens! So, you are right to not draw too many conclusions as being definitive for your sample size. However, while I totally appreciate your call for a wider study, before sample sizes are increased, what is needed is a genuine measurement method. It is all too easy in dance to move in romantic realms of the 'invaluable'. To the point, when I was an editor, I published a dancer's self-reported "life-affirming" piece on a community dance workshop in a school which was all about a teacher saying how wonderful the workshop was because she had never seen a particular child smile before the workshop. That was the acme of accolade, reportedly. I titled the piece 'How Do You Value a Smile?'. People though it was aw-cho-chweet, but in reality, it was an admission of our combined failure to find a way out of a place between a rock and a hard place ie of NOT sounding churlish if you insisted on 'scientific' or statistical rigour when faced with human endeavour and taxpayers' money: with NHS at stake, we cannot afford with Margaret Meads singing up the wrong trees with lifelong dedication. So, I sincerely pray there is proven methodology in place before the larger experiments begin: this is genuinely about life and its sufferers, :) and I am genuinely a supporter of that, especially as I myself age each year, and can dance less and less and worry more and more about Parky and Alzzie dropping in and staying! Congrats on your work so far and my best wishes.

If I were 22: Sara Houston
Measuring the impact of dance