The art of regeneration 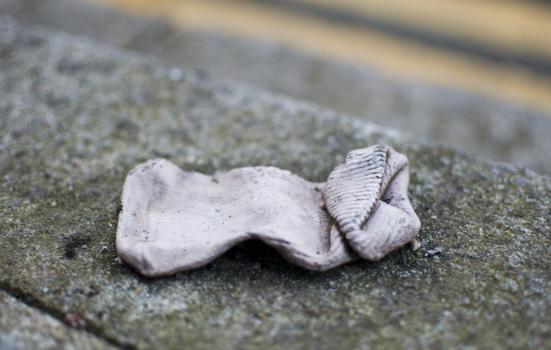 Courtesy of the Creative Foundation

Take a walk around the Old Town of Folkestone and, if you look closely, just over the road from the buddleia-strewn bombsite that is still left over from World War I, you will find what appears to be a tiny pink baby’s sock lying on the pavement as if dropped from a passing pushchair. It is actually a diminutive Tracey Emin bronze sculpture, painted to look like the real thing. The antithesis of monumental art, it is part of the legacy of the first Folkestone Triennial of contemporary art, held in 2008. Look up, past Stirling Prizewinner Alison Brooks’ Quarterhouse arts centre and you will see Nathan Coley’s fairground lights on a scaffold spelling out ‘Heaven is a Place Where Nothing Ever Happens’. Across the way, sprawling up the side of the valley, innovative architecture/art practice has carried out an almost miraculous reimagining of the formerly derelict escarpment as an urban park crammed with interest, wit and fun. And at the top of the hill Banksy made his own uninvited contribution to the just completed 2014 Triennial and to a creative regeneration project that is attracting international attention.

It is through the proliferation of small-scale, local activity that the project has sunk deep roots, spread branches and flourished

The Folkestone Triennial is just one component of an ambitious joined-up approach to arts-led regeneration that has been unfolding in this deprived Kent coastal town since 2001. Other elements include far-reaching educational reforms, the establishment of a sustainable creative quarter where 90 buildings have been renovated and placed in the hands of an arts charity, university research into the links between arts and health, support for the creative industries, and large-scale infrastructure projects including decommissioning an old railway line and redeveloping the historic harbour. The overall programme sets out to engage the whole town in creativity, and it is through the proliferation of small-scale, local activity that the project has sunk deep roots, spread branches and flourished.

Yoko Ono was one of the star turns of an al fresco art show that pushed determinedly beyond the confines of the conventional white cube gallery. Now the grande dame of peace activism and contemporary art has fallen in love with the town and its people. She says: “Folkestone is a town that wants the world to know that it likes art, that it is sensitive to art. I thought I was coming to a sleepy little town, but I found this amazing energy – so much activity – a kind of spiritual rising. I went there to give energy and it was the other way round. Visit Folkestone – it could cleanse your spirit.”

It is a tough job to square spiritual cleansing with more traditional metrics of regeneration, such as economic growth or the numbers of jobs created and dilapidated properties renovated. But a few months ago, the BBC’s Economics Editor Robert Peston told an assembled audience at a ‘provocation’ event for the Warwick Commission on the Future of Cultural Value that trying to measure the impact of the arts on the economy is a “category error”, that “engagement in the arts is pretty shallow” and that subsidising white middle-class people to attend arts events is “in a fundamental sense regressive”. As the squeeze on public finances grows ever tighter, the need for new forms of evidence of impact for public spending on culture is becoming pressing – and the case for a paradigm shift in funding priorities is growing.

Architect and urbanist Sir Terry Farrell recently published the Government’s national review of architecture and the built environment. Visiting Folkestone during the Triennial for a conference on art and regeneration entitled Imagined Cities, he told me: “In the 1960s and 1970s the city was seen as a bad place. Cities were run down on purpose – there was a sense you had to start again. Now there’s been a rethink about valuing what we’ve got. It all began with Covent Garden when local residents, architects and artists argued for it to be kept. Credit for remaking towns should flow like film titles because there are so many hands involved. Art is increasingly very broadly interpreted. A clever masterplan is an artistic activity. Architecture used to be conjoined with art. Now artists are taking over again.”

In the heyday of the capital arts lottery in the 1990s, culture-led regeneration sometimes became confused with the idea of glitzy starchitect-designed cultural palaces popping up in forlorn city centres. It is easy to understand why. Farrell believes: “There’s a certain fraud in politicians – we all know that, we all laugh at it, but we shouldn’t feed it. They opened new galleries in rundown places but you could tell they didn’t want it to be in the town – they wanted it to be somewhere else.”

Also at the Imagined Cities conference was Jude Kelly, Artistic Director of Southbank Centre and founder and Chair of Metal. For Kelly, “Buildings aren’t regeneration. I believe in the power of place more than the power of buildings. Regeneration comes when we make a commitment to change. Nobody should work in the area of regeneration unless they’re on a journey of spirit and humility. Do you think other humans have an equal right to health, education and opportunity? If you do, commit to regeneration.”

Kelly told me: “Culture doesn’t sit in a bubble – it’s related to education, health and regeneration. But arts councils can’t fund everything – they’re doing more all the time and getting more confident about positioning the arts in a social context, without the arts just being used as a tool.”

The Folkestone model shows how art can play a critically important role in regenerating places if strong local and regional partnerships strike the right balance between artistic excellence and community engagement. On the last day of the Triennial, the Banksy was cut out of the wall it had been stencilled on to. This was so it could be sold at auction, sparking a furious reaction from residents and a front page ‘Save our Banksy’ campaign in the local press. Meanwhile, the bronze sock quietly pays tribute to Folkestone’s unusually high proportion of teenage mothers and, at the same time, acts as a wistful reflection on Tracey Emin’s own adolescence in nearby Margate. This is the art of regeneration, combining personal truth with social insight to tell us a powerful new story about a place we thought we knew.