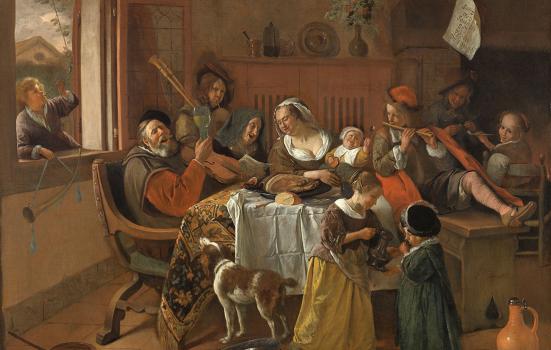 In the plague year of 1668 a locked-down family’s creative activities got a little out of hand. (The slip of paper hanging from the mantelpiece prophetically reads "As the old sing, so shall the young twitter".)
Photo:

Global public health expert Michael Marmot warned recently that the pandemic will make health inequalities worse. How can we ensure that the arts become part of the solution to this looming crisis? The 2017 Creative Health report outlined the extensive range of ways in which the arts supports health outcomes, yet the report conceded that only a “small modicum” of the potential contribution of the arts is currently being realised.

The question is, why are we failing to grasp the full potential of the role for the arts in contributing to health? As Tim Joss asks in a recent AP article, why are we still waiting for the breakthrough?

How do the arts affect health?

The WHO Health Evidence Network’s first ever Scoping Review on Arts, Health and Wellbeing synthesized evidence from over 3,000 studies on the role of the arts in health and wellbeing. It identified “a major role for the arts in the prevention of ill health, promotion of health, and management and treatment of illness across the lifespan”.

The Review concentrated on arts interventions that sit within the medical model and are designed to bring about improved clinical outcomes. Important as that work is, there’s also a broader role for the arts in helping people to adjust to problems brought about by life’s processes and difficulties. Both these aspects should be seen as part of efforts to re-humanize medicine and our healthcare system.

The problem is, despite progress, the fundamental processes underpinning the relationship between the arts and health are not yet well understood.

The arts have always been about our health. The Greeks knew this; it’s no accident that Apollo is the god both of the arts and of healing. Marcel Proust, who spent much of his life in isolation due to ill health, knew it too. He described the artist’s ability to see the universe though the eyes of others as “the only bath in the Fountain of Eternal Youth”. Of course, Proust isn’t suggesting that the arts can make us live longer – rather, he’s conveying metaphorically the idea that creativity moves us from egocentric individual experience, through self-reflection, to intersubjective emotional participation in other people’s lived experience and the external world, and thereby to health-giving benefits.

Interestingly, Arts Council England describes the same process. Its website says: “When we talk about the value of arts and culture to society, we always start with its intrinsic value: how arts and culture can illuminate our inner lives and enrich our emotional world. This is what we cherish.”

This two-step process of self-reflection and emotional connection lies at the heart of how the arts impact on our health. It also reveals that, when it comes to health, the old dichotomy between the instrumental and the intrinsic value of the arts evaporates.

A new definition of the arts

Unfortunately, narrow and often circular definitions of the arts limit awareness of their potential benefits and run the risk of reinforcing a democratic deficit in access to publicly funded culture. Studies such as Rebalancing Our Cultural Capital and the Warwick Commission on the Future of Cultural Value have highlighted the dramatic imbalances in people’s access to the funded arts sector, reflecting the UK’s geographical and socio-economic faultlines.

In Creative Health, Simon Chaplin of the Wellcome Trust says: “… it seems self-evident that the arts, broadly defined, will play an increasingly important role, eliding the boundary between the medical, social and cultural spheres.” But if we are to broaden our concept of the arts, it’s important to understand where the arts come from and what the common factors are that underpin them.

The WHO Review somewhat swerves this task, saying that “the arts have always conceptually been difficult to define”. This is because the arts of the Western canon are a rather loose and fluid social construct, related to patterns of choice and taste. The arts as we currently conceive them are a disparate set of activities forming a more-or-less formalised sub-category of what sociologist David Gauntlett, in his book Creative Explorations, refers to as ‘everyday creativity’.

Currently we can see everyday creativity being played out on social media in real time, as thousands of people, from every background, develop and showcase their creative skills in a huge variety of symbolic and productive forms, helping themselves, and their friends, families and followers, to get through the stresses of lockdown. It’s this concept that we need to focus on defining, in readily understandable terms.

So, what does science have to tell us about everyday creativity?

Secondly, that two-step creative process of self-reflection and emotional connection enacts and supports the crucial mechanism of “mentalization”, first described by psychologist Peter Fonagy. Summed up as the ability “to see ourselves from the outside and to see others from the inside”, mentalization is essential for healthy child development and emotional regulation, underpinning good mental health and empathetic relationships. Problems with mentalization, often caused by abuse, neglect or trauma, lead to much suffering and huge healthcare and social costs.

Thirdly, neuroscientist and philosopher Antonio Damasio foregrounds the importance of our feelings. In The Strange Order of Things, he shows us how all life is governed by the homeostatic impulse to maintain balance. Cultural activity began and remains embedded in feelings, which have a central role to play in restoring lost homeostatic balance.

Finally, scientists from the formal and physical sciences are entering the field, looking at the big picture in order to challenge reductionist approaches that have tended to dominate medical science, and to shed new light on complex creative processes. To give a handful of examples:

Those ‘deep truths’ might include insights into how complex phenomena ‘emerge’ from the fundamental rules that govern the natural world; and also, how our feelings – central to art, but for too long marginalised by medicine – sustain our wellbeing.

These are extremely challenging times for the arts sector, with the Guardian reporting that the UK is at risk of becoming a cultural wasteland. Urgent steps need to be taken to sustain our cultural institutions and the livelihoods of arts workers.

But there are great opportunities, too, if we can grasp the nettle of what David Jubb calls “fundamental structural change” and put the nurturing of creativity in people’s homes, communities and work environments at the heart of what we do. As an example, this year the BBC and Voluntary Arts’s annual Get Creative campaign is moving to the domestic arena as #GetCreativeAtHome, aiming to provide everyone with creative activities to do either alone or with immediate family. In Stoke-on-Trent and Wales micro-grants are available for organisations to set up creative activities people can do in their own homes. How would the arts sector need to adapt if this kind of initiative were to be scaled-up on an ongoing, national level?

It’s not at all clear what appetite there is currently for radical change, but do we know that times of exceptional national stress can lead to shifts in the paradigm. As we begin to shape an unknown ‘new normal’, we need a wider debate than we’ve had before, drawing in perspectives from across research disciplines, policymakers and wider society.

The initial goal should be to reach a shared, science-based understanding of the central importance of everyday creativity in our lives. Beyond that, we need to map out a Whole-of-Government approach, encompassing education, regeneration and economic development, science and technology, environment, transport, local government, and health & social care services, as well as culture. This approach should be designed to place everyday creativity at the heart of a resilient, sustainable, caring society that supports, protects and nurtures the health and wellbeing of all its citizens.

Nick Ewbank runs the cultural regeneration consultancy Nick Ewbank Associates, which has been commissioned by the Centre for Arts and Wellbeing at Brighton University and the Sidney De Haan Research Centre for Arts and Health at Canterbury Christ Church University to support a Discovery Process into the underpinnings of the relationship between everyday creativity and health.

Not merely from personal experience but also professionally as a curator of the visual arts at an arts university, I promoted and experienced the health benefits of art on a daily basis. I can only concur with the views expressed by Nick Ewbank about the importance of creativity to us all and to a fairer society. This very claim - that art in whatever form needs to be part of everyone’s life - passes the revue in England at seminal moments and ‘times of exceptional national stress’: read the Charter of the Arts Council, founded in 1946 right after the horrors of WWII. Today, in spite of 75 years of peace and pandemic absence, I feel sure discussions about the future of the arts will again feature that urgency about change. Nick Ewbank makes a welcome sound: diverse access to the arts is indeed essential to the health of the nation. The wish for a paradigm shift towards the recognition of this intrinsic benefit is as urgent as it ever was. Were it not, however, that the government of the day holding the financial key to walking that talk has too little cogent evidence for this need and is let off the hook. With the discontinuation in 2014 of art as a core subject, including music, the Gradgrind era appears here to stay. No doubt the art world and ACE at the time found some feeble voice of pundit protest. Truth be known, the woeful absence of consistent evaluation within the public visual arts sector has really led to a lack of evidence underpinning the intrinsic value of the arts. So, forgive me, but having borne the brunt of decades of mismanagement of the arts and their Higher Education, I won’t hold my breath…